After taking a big 2-1 series lead in Game 3, St. Louis was out for more in Chicago on Tuesday night. With some added toughness and rough stuff between the whistles, the Blues were able to put the Blackhawks on the brink of elimination behind Vladimir Tarasenko’s two-goal game.

It was a night with its fair share of controversy, but it was the veteran presence and calm composure up and down the bench that made the difference. Tarasenko opened the scoring, getting the ever-important opening goal. It was the second period where things got a little more heated and interesting.

In a swing of emotion, Corey Crawford decided to come to his own rescue midway through the second. What seemed like an initiated fight by the goaltender, turned into a massive scrum that put St. Louis down a man for two minutes.

A controversial call to say the least, but even with a Duncan Keith powerplay goal, the Blues moved past it when it mattered most. Emotions were clearly running high in the United Centre, fans and players alike. With veterans like Steve Ott, Paul Stastny, and the calm demeanour of the coaching staff, St. Louis kept their heads in the game.

The playoffs are a different beast, and just four games into the 2016 playoffs the Blues have proven they’re a talented crew with a level-headed approach. The result: Tarasenko’s second of the game tied it up at 2-2.

This is how you respond to adversity. #stlblues#WeAllBleedBluepic.twitter.com/R4Gqw3KYgd

Keep Calm and Play On

As the game progressed, emotions ran higher and higher. The Blues continued to have an answer to the Blackhawks’ speed and skill; while still playing their tough and stingy defensive game. Brian Elliott and Corey Crawford were exceptional once again. The goalies have stood on their head for four straight games now. Chicago fired 42 shots at the net, outshooting their opponent for the fourth straight game. Duncan Keith scored two goals in the game, but the composure and veteran approach to playoff hockey kept the Blues ahead and the Blackhawks on their toes. The Blues scored two powerplay goals in the game (for the second game in a row), something the team only accomplished 10 times all season.

The team has grown all year, dealing with massive injuries and adversity from the second week of the season. The growth has continued in these first few games of the postseason as well. 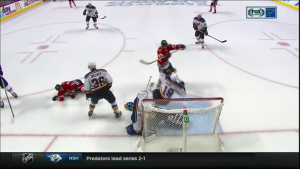 Unfortunately for Chicago, the lack of composure or inability to straddle the line of intensity was lost. Andrew Shaw is supposed to be a guy who’s a thorn in the opposition’s side, but he ended up on the wrong end of the “Stripes'” call in the final three minutes, taking a bad interference call in front of the Blues’ net.

The visitors weathered the storm of pressure from the home crowd and team. Elliott continued to stand tall and the big players stepped up at a critical time of the game.

While Tarasenko scored two, and Alex Steen and Jaden Schwartz also beat the Chicago goalie, the Blues continued to play as a team. There are doubters out there, saying that the Blues are still the underdogs of the West despite another 100+ point season. What they’ve proven so far is that they welcome that call and are happy to show doubters (and supporters) that they’re even better than expected; that when push comes to shove, literally, the big and small guys, will be there to do what it takes to de-throne the defending Stanley Cup champs.

As the puck drops for Game 5 on Thursday, St. Louis fans are feeling optimistic and hopeful. Something they haven’t sensed through the first round of the playoffs in years. This is a different team and one that is determined to prove veteran leadership and composed teamwork get the job done. Chicago is clearly no slouch, the Blues will need to continue to play their game if they hope to close out the defending champs Thursday.

Elliott on Game 5: “They’re going to have their backs against the wall and we have to put it away. It’d be nice to do it at home.” #stlblues