When the Dallas Stars stumbled out of the gate to start the regular season, at one point sitting in second last in the Western Conference, the team regularly looked disjointed; like they weren’t familiar with each other.

This was because, well, they actually weren’t.

It was another busy offseason for the rebuilding Stars franchise, one that saw the organization bring in a new general manager, new head coach, and a wide assortment of new players. On top of all that, they also revealed new jerseys, named a new team captain, and were placed into a new division.

The NHL regular season schedule was released on Friday. Check out our partners at TiqIQ for the best deals on Dallas Stars tickets for all 2013-14 games.

Adjusting to so much change in such a short time is no easy task, and on the ice the growing pains were evident in the forms of bad passes, missed defensive coverage, and a slew of other situations where plays failed because of miscommunication and unfamiliarity between players.

However, even though it’s taken a while and has been happening slowly, things are finally starting to take form in Dallas.

What happened late in the third period of Dallas’ 3-2 shootout victory over the Boston Bruins was a perfect example of that.

With the Stars trailing the Bruins 2-1 in the dying minutes, checking center Vernon Fiddler broke in alone behind the Bruins defence and was hauled down on the breakaway. Although not known for his scoring prowess, Fiddler tied up the game on a sweeping backhand move that even the NHL’s most skilled puck danglers would be impressed with.

What really stands out from that moment, though, was the scene on the Stars’ bench as the players reacted to the goal, captured perfectly here in GIF form (credit to Graham Jenkins):

Sheer elation throughout the entire bench.

Now, on the surface, this sort of reaction doesn’t seem all that unique. It’s par for the course for almost any team that just tied the game late in the third period, on the road, against a very menacing opponent.

But the Stars aren’t just any team. They’re a collection of individuals still trying to come together as a team, which is what makes moments like these, where everyone on the bench can celebrate together, so much more important.

Most importantly of all, these types of bonding moments have been happening with more frequency lately for the Stars, and with the team going 3-1-1 in their last five games, you can’t help but wonder how strongly the two are related.

Win One For Lindy

Dallas’ recent surge all started on October 28 when the Stars headed to Buffalo. It wasn’t just another game on the schedule.

The Stars’ new head coach, Lindy Ruff, who joined the Stars this summer, spent 10 years in Buffalo as a player and then another whopping 15 consecutive years there as a coach. For Ruff, Buffalo will always feel like home.

This homecoming, Ruff’s first game as a head coach against his former Sabres, was not lost on his players. Going in they knew that it was going to be an emotional night for their coach, and they wanted to come together and win the game for him.

The Stars did exactly that, taking home a 4-3 victory.

“Everyone in here, even though we weren’t talking about it too much, we all knew what tonight meant to our coach,” Seguin said. “He’s always there for us, trying to make us better players and a better team, so we definitely wanted to pull a win out for him tonight.”

“We saw today how important it was to him. It’s a third of his life, really, with the time he has spent here,” added general manager Jim Nill, another new face from the summer that joined the Stars after years in the Detroit Red Wings’ front office. “And I do think we became closer afterward. The players wanted this for him, you could tell that.”

Valeri Nichushkin, Welcome To The NHL

Sure, every player does, but Nichushkin really loves to score them. And his proficiency towards doing so in a short time in the KHL (10 goals in 43 games) was the main reason why the Stars not only selected him 10th overall in the 2013 NHL Entry Draft, but also why they encouraged him to immediately make the jump to the NHL.

However, through his first 12 NHL games, Nichushkin still had a big 0 in the goal column. The effort was there, and so were the chances, but the results weren’t. For every game that passed, for every shot that didn’t go in, a little more frustrating weight was added to the shoulders of the 18 year-old Russian, something that was painfully obvious to all observers.

So when Nichushkin finally broke through on November 3rd against Ottawa it was a huge moment for him, one that was emphatically shared by his teammates. 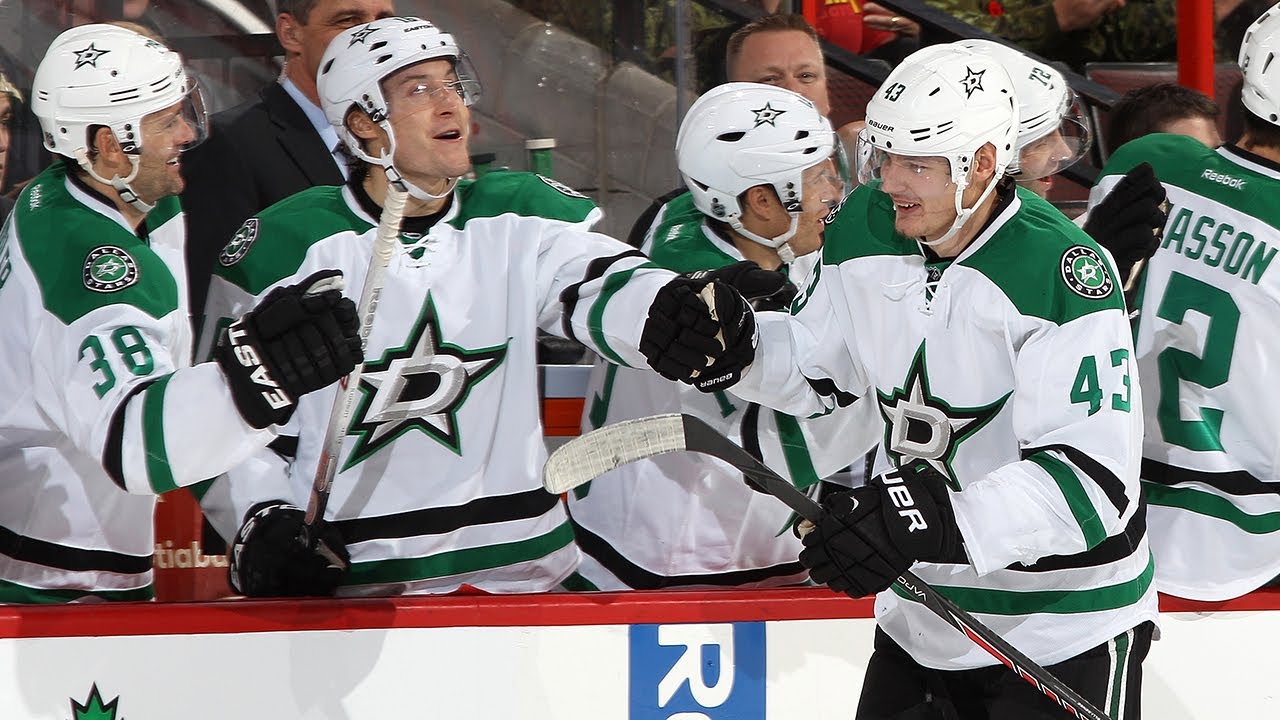 “Everybody’s thrilled for him” mused play-by-play man Daryl Reaugh in the most pleasantly obvious quote of the night.

No kidding. And right in the middle of it, in perfect captain form, was Jamie Benn, with the ear-to-ear smile and the low-five on the bench, showing plenty of support for his younger teammate.

The bigger story in the Bruins game, aside from Fiddler’s shootout snipe, was undoubtedly the return of center Tyler Seguin to the team that drafted him 2nd overall in 2010, and then shipped him away to Dallas only three years later amidst a media frenzy of rumours about bad partying habits, a lack of work ethic, and other games of he-said she-said.

Seguin knew coming in that it was going to be a unique game.  A chorus of boos rained down from the Boston faithful every time the young center touched the puck, but Seguin kept his composure.

And, like has been happening with more regularity lately, the Stars team came together. They played arguably their best overall game of the season against a very strong opponent, outplaying the Bruins throughout regulation and overtime.

The Stars won the game by also having the edge in the shootout. The scorers that night? Seguin, as well as Rich Peverely, another former Bruin that was part of the same trade.

For Seguin and the Stars, you couldn’t ask for a more storybook ending.

This is the new slogan for the Stars this season (hey, something else that’s new), and is donned on a banner that hangs in the team’s locker room.

Everybody ropes. Everybody rides. pic.twitter.com/xu5bkj25Zr

It’s a slogan of teamwork, and one that’s fitting for the Stars, but not just for it’s appropriate Texas vibe.

The Stars are a team that lacks the sheer talent of higher-profile squads like the Pittsburgh Penguins or San Jose Sharks. For the Stars to win, they can’t do it on the backs of a handful of individuals. It needs to be a team effort, which is why the recent games the Stars have played where the team has come together are so important.

The Colorado Avalanche are a perfect example of what can happen when you have everyone on the team on the same page. The Avs don’t have the starpower of a Sidney Crosby or an Alexander Ovechkin, but still have a record of 12-2, which is eye-popping for a team that was universally predicted to miss the playoffs. But under the tutelage of new head coach and Hall Of Famer Patrick Roy, the team has bonded. Roy is the captain of that ship. His 23-man roster? All hands on deck. It’s the sort of successful situation that the Stars are trying to emulate, even if they don’t have a charismatic focal point like Roy.

It’s been said that teams bond the most when they’re on the road, away from their homes and constantly in contact with each other in planes, buses, restaurants and hotel rooms. Four out of the Stars’ last five games have been on the road, with one more to come, Thursday night in Detroit, the final stop in what The Dallas Morning News’ Mike Heika calls “The Travelling Homecoming Float.”

As this Traveling Homecoming Float pulls into Detroit, there have been plenty of moments to reminisce. Lindy Ruff in Buffalo, a gaggle of players in Montreal, Sergei Gonchar in Ottawa. Seguin and Peverley in Boston. Now Jim Nill in Detroit.

This is an odd gathering of players tossed together in one summer. But they are no longer Sabres or Canadiens or Senators or Bruins…at least that’s the hope.

Robidas loved the fact that the team bonded in this win. They wanted to help Seguin through this challenge, and they clearly did.

Seguin was allowed to stand center stage in the shootout. He scored to get the shootout tied, and then watched as his old buddy Peverley won the game with his shootout goal. They both beat former teammate Tuukka Rask, while Kari Lehtonen stopped former teammate Loui Eriksson (who was included in the Seguin trade).

So, all of the elements came together perfectly at the right time…and as far as the Stars are concerned, the good guys won.

Soon this road trip will end, and then the Stars will be back at home. However, the hope is that they’ll return as a changed team. A more unified team.

If the team’s recent success is any indication, then they’re already well on their way.