Scott Darling met with the Carolina Hurricanes media today, in his first press conference as the team’s newest goaltender. Fresh from signing a four-year, $16.6 million contract last Friday, Darling was ready to get acquainted. I took the opportunity to ask him about the defensemen in front of him, given their relative youth. Darling said,

Yeah, yeah, absolutely. I actually played summer hockey with Noah (Hanifin) and I know how great he is. Like I said, I’ve played against the team. There’s some amazing players on this team. A young defense that are only going to get better. So, I’m excited to play with them.

Darling is right. There are some amazing young players on the Hurricanes. The defense is anchored by, what on this team is a veteran, 25-year old Justin Faulk — none of the players listed on the Canes’ current defensemen roster is 30-years old. They are a young group, and at times they can be amazing. At 28, Darling should fit in well with them, and given his experience of being on a team that won the Stanley Cup, provide great leadership.

One of my colleagues asked Darling about the lack of a captain on the Hurricanes, and how that might compare to his experience with the Chicago Blackhawks and their captain, Jonathan Toews. Darling said,

Just watching a guy like him (Toews) who has accomplished everything you could ask for in your entire career — won the gold medals and Stanley Cups. He’s done it all, but shows up every day at the rink and works harder than everybody else and leads by example. Like for me, I’m a goalie, I’m not really a vocal leader. But, I show up everyday with a smile on my face, ready to work, excited to be here.

Darling added that he learned a lot from everyone on the Blackhawks, and is excited to use that to move forward in his career.

Darling will have big skates to fill if indeed he becomes the starting goaltender for head coach Bill Peters. Cam Ward has been the starter for pretty much the last decade, and fans remember him bringing the Stanley Cup to Raleigh in 2006. There are a lot of Ward detractors, but there are a lot more who have a place in their heart for him. Darling will have to work very hard to take up that mantle.

Another of my colleagues asked Darling if he has been told that he is to be the Hurricanes’ number one guy, if it is a given, or if there is an open competition. Darling said,

Nothing is given to you in this league. There are two other great goalies here. My job is to show up and play the best I can and try and take the next step. That’s all I really know.

Darling also said that Ward and Eddie Lack had both sent him text messages, welcoming him to Raleigh. 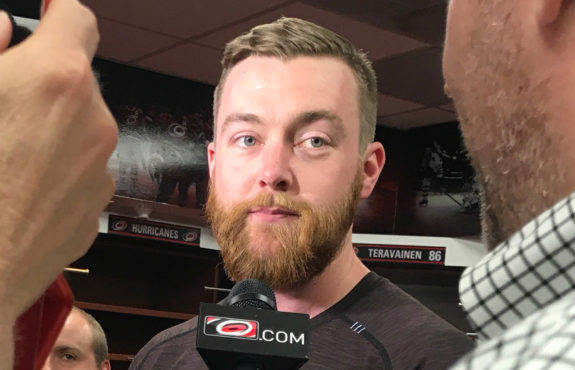 As to why he feels he is a number one goalie, Darling said that he feels he has grown a lot over the past three years, and has had opportunities to show that he can carry a heavy workload with Blackhawks goalie Corey Crawford being sick. Hurricanes general manager Ron Francis is obviously a believer, having almost immediately signed Darling to the four-year deal.

@SDarling_33 @NHLCanes Welcome to Raleigh, Scott, and welcome to the Canes! Looking forward to seeing you in net. Go Canes!

By the way…Darling said the beard is here to stay, although he did trim half of it for the media gathering. What a guy.