Sixty-nine points, nine points out of the last playoff spot. Fifth in the Metropolitan, 11th in the Eastern Conference, 23rd in the league. No chance of playoffs

That was the Philadelphia Flyers a year ago as coach Craig Berube entered his last 13 games behind the bench in Philly. The team ended up finishing sixth in the Metro and fired Berube six days after the season ended.

Seventy-three points, three out of the last playoff spot. Fourth in the Metropolitan, ninth in the Eastern Conference, 17th in the league. Playoffs in grasp.

That’s the Flyers today with new coach Dave Hakstol at the helm. The turnaround, player improvement and change of system is why the rookie coach deserves some Jack Adams Trophy consideration, for best coach in the NHL, this season.

As the first coach to be hired from the NCAA into a head coaching role since Bob Johnson became the coach of the Calgary Flames in 1982, that alone should be enough reason to celebrate Hakstol’s successes this season. He went from coaching 18 to 25 year olds at North Dakota to coaching multi-millionares where a successful leap has been scarce to say the least.

That may not matter much to the voters for the Jack Adams, but they do typically tend to pick a coach that led a team to surprising success, which Hakstol qualifies for. It may give him an edge over a coach like Washington’s Barry Trotz. 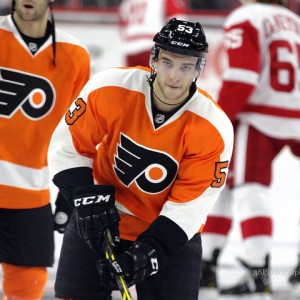 But the main reason to celebrate Hakstol’s work is the improved play of his players. Brayden Schenn is now a 20-goal scorer, Sean Couturier has finally embraced the shutdown two-way dominant center he was supposed to become, and Shayne Gostisbehere has turned heads across the NHL.

While Gostisbehere deserves a lot of credit for the Flyers’ turnaround, Hakstol is the one that worked him in slowly and played him in the right situations which should help him avoid growing pains like Adam Larsson, Luca Sbisa and even Victor Hedman went through. Hakstol’s also helped the play of youngsters Nick Cousins and Scott Laughton, who he recently moved to wing to help him avoid some defensive deficiencies.

Remember when the Flyers were thought to have one of the worst defensive corps in the league before the season started? Those comments aren’t being made as much anymore.

Besides helping Gostisbehere, Radko Gudas and Michael Del Zotto settle in and play an effective game in their own playing styles. Hakstol has changed some of Berube’s system to help the defense.

An aggressive neutral zone has kept the team from getting pinned in its own zone often whereas Berube would have the defense sit back more. To see that in full effect, just watch the Flyers’ last game against the Tampa Bay Lightning where they controlled possession and stymied one of the fastest teams in the league.

The offense also doesn’t dump and chase the puck as often as they used to. Castoffs like Sam Gagner have been able to contribute more, while Schenn has found a new level in Hakstol’s more possession-based system.

While the Flyers are having a much better season than last year, the simple fact remains that they have not earned anything yet. There’s no way Hakstol wins the Jack Adams if the team doesn’t make the postseason.

Then there’s also the competition. Trotz, as mentioned earlier, is having a great season, while Florida’s Gerard Gallant and Dallas’ Lindy Ruff are just a couple of coaches that fall under the umbrella of having a “surprising successful season.”

Hakstol isn’t a perfect coach, but really no one is. He makes some questionable lineup choices and seems to play favorites on some occasions, but the Flyers are in a better place than a year ago.

Playoffs are in reach, players are reaching potential and the team, as a whole, has improved greatly. If the Flyers can make the playoffs, Hakstol should be in serious contention for the Jack Adams trophy.

Wes Herrmann graduated from Penn State with a bachelor’s degree in journalism in 2014. He used to write hockey for Cardiac Cane and Broad Street Buzz and has loved the game since birth. Follow him on Twitter at @Wes_Herrm or contact him at wherrmann421@gmail.com