It’s no secret that the general population is unhappy with the downward trend of the Detroit Red Wings. A head coaching change and major roster adjustments throughout the years has forced the Red Wings to address a particular point of weakness. Since their move from the Western to Eastern Conference at the start of the 2013-14 season, Detroit has been unable to generate a steady assertive urgency in their game.

The breaking point for the Red Wings came at the tail-end of the 2016-17 season when Detroit missed the playoffs for the first time in 25 years. Though all fingers were pointed at Ken Holland and Jeff Blashill, they are not completely to blame for the recent slump. The team as a whole has adopted a laid-back, borderline nonchalant style of play that just won’t cut it in the Eastern Conference. Taking a look back at the 2008 Stanley Cup, Detroit’s last Cup title, it’s evident that the Wings’ roster was loaded with scrappy, get-to-it guys like Kris Draper and Tomas Holmstrom. The team of old played with an assertive offense and confident two-way defense as found in the likes of defenseman Brian Rafalski who acquired 55 points in the 2007-08 regular season.

Shortly after the move to the Eastern Conference, the Red Wings’ urgency and aggressive forecheck seemed to fade overnight. They barely made it into the Wild Card spot in the 2013-14 season with 93 points and dropped completely out of contention by 2016-17 – finishing the season with 79 points. The lack-luster physical performance by the 2016-17 squad has resulted in being bullied along the boards and beat in all corners of the ice. 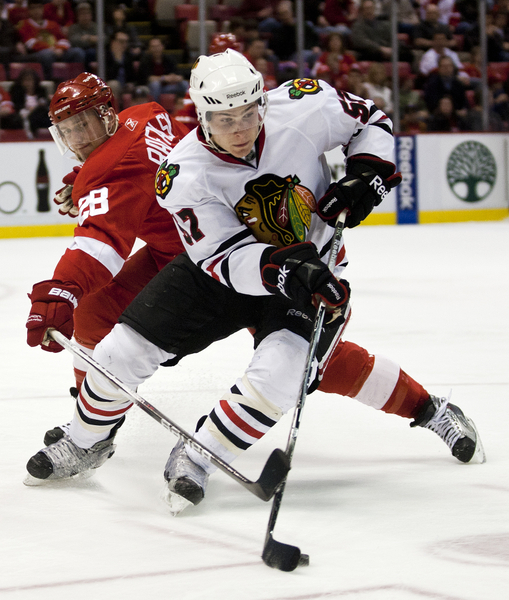 After the conference move, the Red Wings were forced to face a significantly more brute-ish style of play with Eastern teams like Boston, who steamrolled through the season with a 54-19-9 record. Close behind was Pittsburgh who finished out 2013-14 at 51-24-7. Headlining the charge were physical and talented players like David Krejci (69 points) and Jarome Iginla (61 points). In contrast, the Red Wings’ best skaters only managed a point high of 49 courtesy of Daniel Alfredsson and Niklas Kronwall. Though they were physical in their own right, the rest of the team limped along the regular season, desperately grappling at a balance between being physical and finesse.

The Red Wings’ lackadaisical puck movement has become unmistakable when compared to current cup-contending teams in their conference. Taking into account the high-octane style of the Washington Capitals or Tampa Bay, the Wings fall desperately short in the energy category. Though they have never been a highly-physical team, the aggressive pursuit of the puck was a notable attribute of the Wings once upon a time.

As a result of the slump of seasons past, Detroit finds themselves in the midst of an aggressive developmental phase. Accumulating draft picks and loading Grand Rapids’ roster with Red Wings soon-to-be’s, the effort to recover this urgency is underway. Given the promise behind young defenseman with edge like Joe Hicketts or Filip Hronek, the Red Wings seem to be striving for a more assertive style of play.

The Wings currently have speed and skill individually, however, the team as a unit has not seemed to blend that skill into a cohesive on-ice performance. The roster is teeming with young men with vast experience that need to push and be pushed harder. If the improvement of Dylan Larkin is any indication, a push is what this team needs. Blending the veteran leadership and freeing up cap space is a start, but not the final solution. The Wings need to be more aggressive, stronger along the boards and learn to lead plays, not just chase them.

The competition in the East is getting more challenging and will continue to do so if these Stanley Cup Playoffs are a foreshadow. Detroit’s consistency faded shortly after the 2013-14 conference shift and has not regained the stamina and strength of seasons past. With a strong core group currently in Detroit and several promising players in Grand Rapids, the Wings have the fundamentals of building a dream team once again. The Eastern Conference teams won’t wait for the Wings – Detroit must once again, make themselves the team to beat.