A 3-2 shootout victory over the Islanders on Halloween afternoon improved the Devils to 6-4-1 in October. After going winless in their first four, the Devils have gone 6-1-0 to close out the first month of the 2015-16 season and are finding a knack for the dramatic finishes along the way. New Jersey has six wins on the season–four coming in overtime and five of their wins have been one-goal games. The Devils are quietly flipping the script on critics, who pegged the team to be a shoe-in’s for the Auston Matthews sweepstakes as the first overall pick at the 2016 NHL Draft. Here are some of the early observations of this Devils team:

Adam Henrique Back to the Middle

Internally, there was debate over how fifth-year Devil Adam Henrique would be slotted. Last season he spent time at wing and center, leading the team in points with 43–the lowest point leading total in franchise history. Still the 25-year-old has featured prominently this season as part of the solution and not the problem–and as of late, the team’s best option down the middle. Since moving back to center in the second game of the regular season, he’s scored nine points in ten games and has a spelled Travis Zajac for the number-one center spot with Mike Cammalleri and Stempniak. He’s averaged over 20 minutes a game and on a team with offensive concerns he has a chance to be the difference-maker up front with a breakthrough season.

The Devils have won just one of their six games by more than a goal. A 4-1 win over the Flyers on Thursday, Oct. 29 saw Zajac net two goals and three shots. The center has seven points on the season (4g-3a). For the time being, he’s has been demoted from the top center role yet again. Last season he found himself demoted to the third line for a share of games as Scott Gomez and Henrique knocked at the door. His struggles have been well-documented, last season’s  25 points in 74 games among them. With six years remaining on an eight-year, $46 million dollar contract, the pressure has continued to mount for a center whose seen linemates Zach Parise and Ilya Kovalchuk leave the organization. The 2015-16 campaign though has brought on a degree of appreciation for the Winnipeg native particularly on the dot, where he has a 55.4 win percentage.

The top defensive pairing of Andy Greene and Adam Larsson are averaging 24.36 and 24.16 minutes respectively. The duo have faced a combined 240 shots, blocking a combined 34 of them and average 0.22 penalty minutes per game. After all of Larsson’s woes last season under former coach Pete DeBoer, including multiple watches from the press box, the 22 year-old and former fourth overall pick is seeing playing time and plenty of it. Fresh off signing a six-year, $25 million dollar extension this summer, he joins the veteran blue liner yet again and this time it looks permanent. The strength of the Devils is in their youthful defense and it starts with a pair that is among the most underrated in the NHL.

Reaping Rewards on a Dime

The Devils were not an active player in free agency. John Moore’s three-year, $5 million dollar contract was the longest signed from the open market this summer. Moore has done well playing inside the defense’s top-four and makes up part of that youth core on defense, chipping in the first Devils goal Saturday versus the Islanders. Departures including Scott Gomez, Steve Bernier, Martin Havlat and Michael Ryder made it apparent the team was going to offer opportunities to others up front and have done so for cheap, short-term deals. Jiri Tlusty’s one-year, $800,000 contract, Stempniak’s one-year, $850,000 contract and David Schlemko’s $625,000 contract among them. Tlusty and Stempniak have combined for ten points in nine games, both seeing time on the top line. 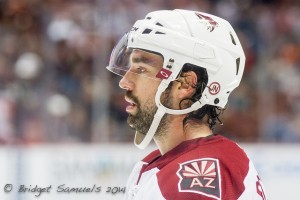 Schlemko appeared to be a safe, seventh man option on the team’s defense. Now, averaging just over 16 minutes a game, he’s appeared in all nine games this season, forcing Eric Gelinas, Jon Merrill and Damon Severson to make trips to the press box. In case you weren’t doing the math–that’s $2.275 million for three players that average over 15 minutes a night.

The changes in Jersey have been apparent, I wrote about some of them earlier this month. Twitter and social media, warm-ups without helmets, half beards? So far the Devils appear well-adjusted to the landscape that has changed within the organization, working to help better facilitate their fan base. Early struggles in attendance (averaging roughly 12,000 a game) have magnified the long overdue need to be a more inviting, fan-oriented entity.