The new Ice Patrol team allows us to expand what we have done with the Ice Girls in the past. Opening the squad up to both men and women gives more people the opportunity to become a part of our entertainment team. Plus, the Ice Patrol will have the ability to be involved with many different aspects of our in-game experience, leading to more face time with our fans.

Little-known fact: I was the first contestant at the Cedar Park Center ever to win at ‘Card Sharks’ during a so-termed in-game experience. It was during an 18 March 2010 game vs the Milwaukee Admirals. Texas held a 4-1 lead deep into the third. Then, perennial “Top 10 NHL Draft Busts” listee Hugh Jessiman made things interesting by assisting on an Andreas Thuresson goal then adding one of his own in the span of about 80 seconds. It wouldn’t be enough– Stars win 4-3. 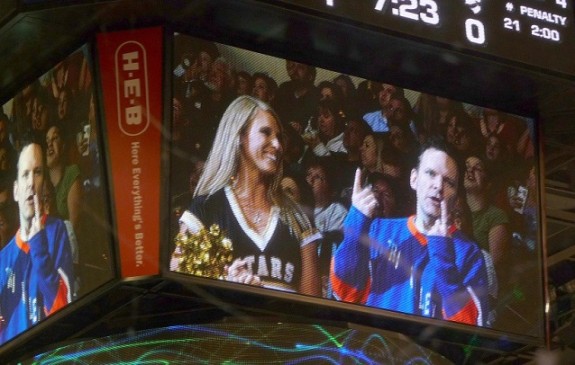 I knew I would be playing Card Sharks on the Jumbotron that night so I wore one of my jerseys from my days playing minor hockey. Go Tri-Valley!

So I can’t say I greet the news of their termination with any great sorrow, or any great emotion at all really. With all due respect, I don’t really care. But I do wonder what other reasons drove this decision, if any, and whether it is all a set-up for a much worse scenario.

For four seasons, the only thing that was constant about the Ice Girls was that their numbers seemed to decline over the course of the season. In September ten would be announced as the new squad, and at the final home game maybe six would be there, and at least one or two weren’t even among the original ten. Attrition is common in almost every job, so perhaps some of this is to be expected. However, rumor is also common in every job, and the many rumors over the years involved far too many player-Ice Girl hook-ups (which was forbidden) and the alleged discovery of at least one Ice Girl moonlighting at a local strip club, among other salaciously unsavory stories.

Perhaps this is one reason why the Stars went and hired a former Dallas Cowboys cheerleader to manage the Ice Girls, as that renowned squad is also famous for maintaining a chaste image. Nonetheless, this doesn’t seem reason enough to can the squad.

Cheer teams are supposed to be seen and heard. But they’re supposed to be seen and heard cheering the team and having their pictures taken with fans; putting on the cheer-y persona, in other words. And maybe it doesn’t matter to Texas what kind of infamy an Ice Girl can create for herself on national television, so long as she is a former Ice Girl.

Current Big Brother house guest Aaryn Griess, whose racist remarks and other deplorable behavior have made her a member of that club of America’s most-despised reality show contestants, was a Texas Stars Ice Girl.

But she is only negatively impacting her own image; the Stars can’t possibly be too bothered their former association with Griess.

Spirit sticks are given out mostly at cheerleading summer camps to squads who exemplify what it means to be ‘spirited’ in the cheerleading sensibility. The movie Bring It On prominently featured not only a spirit stick but also a superstition associated with it: Receiving the stick is both blessing and curse—it rewards a squad for their spirit and hard work, but should they drop it and should it touch the ground—the squad will be cursed with a horrible cheer year.

The very last Ice Girls feature on the Texas Stars website ran on 1 March 2013, and it introduced the Texas Stars Impact Stick, as well as the first recipient of the stick. After consulting with two former cheerleaders who cheered in the state of Texas (one being my wife, reminding me again of her status as a National Cheerleading Association (NCA) champion), I can find no discernible difference between an Impact Stick and a Spirit Stick.

Well take a look at the picture included with that feature: 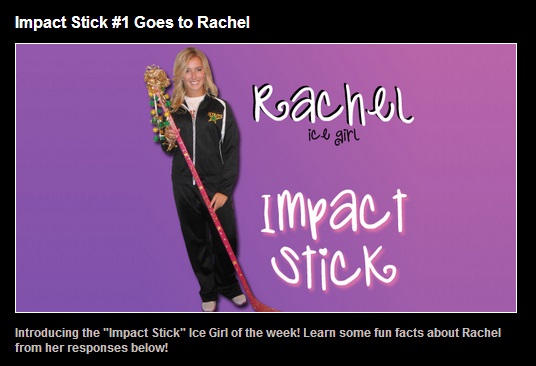 The Impact Stick is almost assuredly touching the ground. The Texas Stars Ice Girls, officially disbanded, are poised to have a most terrible 2013-14 cheer year.

My biggest concern is that the Ice Patrol is actually a program meant to find, groom, and then slowly ease a furry, ridiculous mascot onto this team.

And I do not want a damn mascot.

11 thoughts on “Did a Spirit Stick Doom the Texas Stars Ice Girls?”