Anyone interested in the history and theory of sport should be intrigued by hockey, far from being the modern game one may imagine, hockey has ancestral variants reaching right back into ancient times and cultures. There are a multitude of variations of the game – often depending on which part of the world you’re from.

Many of us may have been raised with simple high school variants of the game, and a lot of you will have played uni-hoc at some point. It’s the best starting point from which to study hockey as the term uni-hoc basically stands for universal hockey – a bare bones version of the classic game.

Uni-hoc generally involves a puck and cheap plastic sticks, meaning players avoid injury but get the full thrill of hockey. It tests your control and requires a good strategic brain, being quite a territorial sport, players move the puck through simple zones of play and generate space for a shot.

Field hockey is a step up from uni-hoc, and is often quite a female dominated sport in Europe, apart from in countries like Ireland where it holds a lofty perch amongst its national games. It’s much more fluid than uni-hoc, partly due to the heavy ball and solid wooden sticks. It thus demands much more physical exertion, but a lack of protective gloves often leads to a lot of bashed fingers and thumbs.

Field hockey ties into street hockey, or road hockey as it is sometimes know, which can be played all year round by substituting a puck for a ball, this kind of hockey is mainly popular amongst kids. Typically, is it called street hockey because it is played on the street without wearing protective equipment.

A new kind of hockey game that seems to be sweeping nations is online hockey. Places like RiverBelleCasino.com cleverly incorporate the hockey theme into their slot machine games and make it accessible to everyone (aged 18+) at any time. The chance to play the bonus rounds of these kinds of games is something that attracts many people as the opportunity to gain an even bigger jackpot is something no one wants to pass up on.

These hockey slots games can be played at online casinos whilst at home, on the move or even during half time of a hockey match. The accessibility has even meant that hundreds of people can get their hockey fix outside of the hockey season and even stand the chance to win a little money.

Hockey betting is another way of playing the game and it has become a popular method when it comes to spicing up a match. By simply picking which team will win during a match could result in 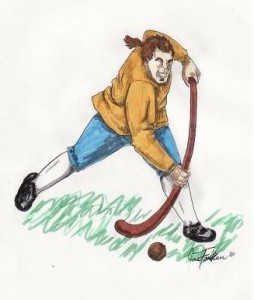 winning a lot of money. This is mainly popular within ice hockey competitions and it can even be done online, not just at the local bookies.

Ice hockey is the popular North American/Eastern European variant of the game and adding the element of ice provides speed, ice skating skills, and many added physical dimensions to the game – remembering that we’re discussing hockey as a stick and ball concept. Ice hockey is the most physical of all the variants and this can be seen in the attitude to fighting on the rink and sometimes even the stands!

If you take away the ice, you still have roller hockey which is played by over 60 countries across the world and has a massive global following. The idea is pretty similar to ice hockey and, although there’s no ice, it still involves speed, skill and the idea to think tactically while skating and trying to shoot the ball.

Hockey has become more universal and accessible to an even wider audience since the creation of sledge hockey which is aimed at people with disabilities affecting the lower half of their body. Players sit on a specially designed sledge and use their hockey sticks to pass, shoot and propel their sledge across the court.

Possibly the most random kind of hockey is underwater hockey, which is played, as you guessed it, under the water of a swimming pool. This is a limited-contact sport and the sticks used to play are a lot smaller compared to normal hockey sticks.

To throw air hockey into the mix may seem a tad frivolous now but it fits hockey’s definition perfectly. Using a perforated table which provides an air cushion for the puck, kids in arcades across the world have enjoyed air hockey for years.

Hockey is a prime example of how a sport can change and develop over time and the different variations played across the world on foot, underwater on online has meant that hockey will keep developing for years to come.