Two of their most promising rookies scratched, a substantial drop in goal scoring, and a team that has suddenly become full of despair and rife with inconsistency

That’s what the 2016-17 Philadelphia Flyers have become.

This is all emanating from a team that sat fourth in the entire league in the middle of December.

As if that wasn’t enough, the Flyers have been making several roster moves lately that have left some scratching their heads. Those moves may have shifted the teams focus more towards defense, but it is coming at a very steep price. The team cannot score goals, let alone create any sustained offense.

Shayne Gostisbehere has been one of the most controversial lineup decisions as of late. The youngster hasn’t looked nearly the same as last season, but has he still been a valuable asset to the Flyers?

Dave Hakstol has said that his goal is to put the best lineup forward night in and night out. So are the Flyers better off without the Ghost? Or should he have never been benched at all?

Creating Offense From the Blue Line

There’s been a lot of controversy running through Philadelphia regarding the benching of Gostisbehere. He was recently named Philadelphia’s Pro Sports Athlete of the Year, but that has been largely overshadowed by the three games in a row he’s spent in the press box.

That begs the almighty question, does Gostisbehere deserve to be benched? More importantly, does scratching Gostisbehere make sense given the options to replace him?

Before delving into the advanced statistics on the matter, it’s important to look at some basic statistics and how Gostisbehere compares to his counterparts in the orange and black.

We’ll start out with goals for per 60 minutes and goals against per 60 minutes. This will give a good representation of how much offense each defenseman creates while they are on the ice, and how effective they are at keeping the puck out of their own net. Keep in mind that this is a measure of how many goals the team scores or gives up for every 60 minutes the player is on the ice. 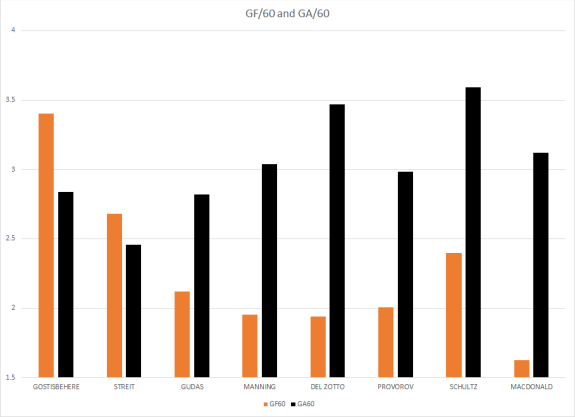 Those stats pretty much speak for themselves. The Flyers score at a significantly higher clip when Gostisbehere is on the ice, in fact, they average almost a full goal more per 60 minutes. All of that also comes while Gostisbehere allows the second fewest goals against per 60 on the ice. Compare those numbers to the guy who has been taking his spot (Schultz) or the guy who probably should be on the bench (MacDonald) and you’ll see why people are left scratching their heads.

No other Flyer defender can even come close to creating that sort of offense, but there is a more important aspect to this stat.

If you look at only power play time, the Flyers average 8.66 goals per 60 minutes with Gostisbehere on the ice. That’s ninth in the entire league. Of course, everyone knows that special teams are where Gostisbehere (and the Flyers as a whole) excel, but the importance of him being on the blue line is unmatched, and it’s quite clear.

During the past 3 games that Ghost has been on the bench, the Flyers are just one for nine on the man advantage (11%), and they’ve only managed 13 shots on goal over those power plays, which comes out to an average of just 1.4 shots per power play. Not nearly good enough and having the dynamic defenseman back on the blue line would certainly help.

Now that we’ve gone over the basics, it’s time to dive into possession metrics.

Since the NHL doesn’t track the length of time players spend in each zone, possession statistics give us a good idea of that. You can find a cheat sheet on advanced statistics here, but generally speaking, if a player’s CF% is over 50%, it means he’s firing more shots and the opposing net than the opposing team is firing at his net while he is on the ice.

This is a very important stat, especially for defensemen. It tells a better story than the plus/minus statistic, which is probably a bad metric to go by, for a plethora of reasons. With Corsi, you essentially get the full story as opposed to plus/minus, which may be very dependent on several outside factors.

Let’s take a look at how the Flyers defense stacks up against each other in terms of Corsi-percentages. 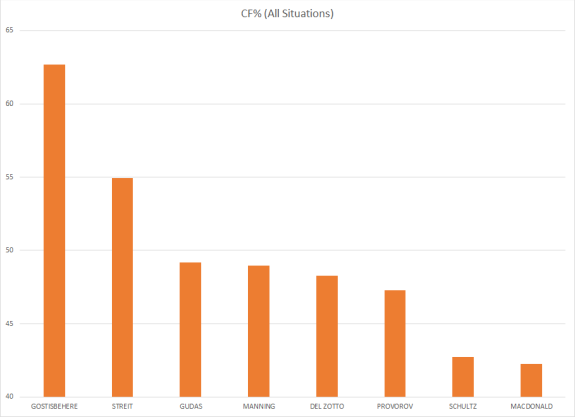 Yes, you read that graph correctly. Gostisbehere’s CF% is 62.67% which is second in the league behind only Tory Krug. Now, this is, of course, taking into account all situations, which means it includes power play time. So what happens when you calculate this at just even strength?

Gostsibehere’s CF% at even strength is 53.69%, which is still good for 21st in the league. More importantly, that number represents a significant tick up from his even-strength possession metrics last season when he sat at just 50.14%.

It’s also important to compare this to the numbers that Andrew MacDonald and Nick Schultz are putting up since these are the guys who are likely filling Gostisbehere’s spot. Both of their CF% sit right down around 42%. Once again, it’s important to note that includes all situations, and both of those players kill penalties (little to no shots generated), whereas Gostisbehere does not.

However, when you compare things at even strength, they still sit dead last on the Flyers, hovering right around 48%. That’s still significantly lower than the number Gostisbehere possesses, and keep in mind, he is the offensive defensemen in all of this.

If Dave Hakstol is aiming to field the best lineup night in and night out, then there is no reason why Gostisbehere should continue to be a healthy scratch, basic and advanced stats are on his side.

Does that mean Gostisbehere should be immune to criticism? Certainly not. Being an offensive defenseman carries inherent risks, and we’ve seen those risks come to life this season as Gostisbehere has had his fair share of bad decisions this season

But does it mean he should become the scapegoat for a team that is struggling defensively? Absolutely not, because the problems aren’t limited to just him.

Claude Giroux had an atrocious turnover the other night that contributed to the blow-out against the Hurricanes and Jake Voracek had a costly turnover against St. Louis that essentially sealed the game for the Blues early in the third period. By the logic the Flyers are living by, those two guys should see time in the press box as well, however, that really wouldn’t put the Flyers in any better position to win.

Even Ivan Provorov struggled early on in the season in a game against the Blackhawks, going minus-5 in his third NHL game ever. The Flyers didn’t scratch him, they stuck with him, threw him right back into the fire, and two months later he came back and scored two goals against the same team. That’s how you instill confidence into young players.

It’s important to remember that Gostisbehere is still a young player and patience is a virtue, especially in today’s NHL. He came into the league as such a force last season that unrealistic expectations were placed on him this season, and that has led to undeserved criticism.

Given the fact that the Flyers have now only scored two goals (three counting an empty netter) and are struggling on special teams, they need all the help they can get offensively, and that means putting Shayne Gostisbehere back into the lineup.