By now, you’ve heard your fair share of commentary relating to Buffalo Sabres fans cheering against their team. Everyone from the media and players to other fans have chimed in on the behavior. The simple fact of the matter is if you’re looking to point fingers, then be upset with the National Hockey League, not Sabres fans, and not even Sabres management. The draft lottery system is broken and everyone’s just playing to the system that’s put in place.

Don’t Tell Someone How to Be A Fan 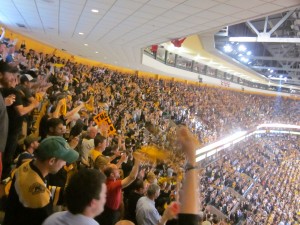 First off – personal opinions aside – no one has any right to tell someone how to be a fan or challenge someone’s fanhood (assuming someone isn’t doing something detrimental to others or his/herself).

That means if the “pro-tanking” crowd wants to cheer for the opposition in hopes of being better positioned for the draft because they consider this to be the best long-term strategy to better their team, then they have every right to do so.

On the flip side, if the “traditionalist” crowd wants to cheer for the Sabres to win through thick and thin, no matter the circumstances, they also have every right to do so.

Both sects are supporting their team in the way they believe is best. However, what’s not okay is members from each sect chastising the other. Within some discussions, it’s gotten downright nasty with people’s morality and intelligence coming into question.

This is what’s most disappointing. The whole tanking discussion has driven a wedge between Sabres fans, which deteriorates one of the core pillars of fanhood: unity. Quite possibly the greatest effect sports has on culture is its ability to bond together individuals from varying backgrounds.

I think all Sabres fans can agree, that they’re eagerly awaiting the end of this season so that they can return to a sense of normalcy and unity.

The Draft Lottery Needs to Change

The real culprits here are those that created the system which incentivizes losing. The fact that the NHL has put Sabres fans (as well as fans from a half dozen other teams) in the uneasy position of hoping for losses is the only thing unsettling here. From a hockey outsider’s perspective, this certainly doesn’t make the league or the game look very good (to say the very least). 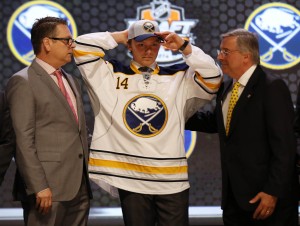 Picks like Sam Reinhart will now get tested at the combine in Buffalo the next two seasons. (Bill Streicher-USA TODAY Sports)

In addition to the fans, no one can fault owners or GMs for simply working within the rules of the system. The number one goal for management is to put their team in a position to not just win, but become champions, even if that means making short-term sacrifices.

Mark Cuban summed it up best when he told The Buffalo News,

The first step is admitting to having a problem, which the league clearly isn’t doing. When asked about tanking, NHL deputy commissioner Bill Daly responded,

“I don’t think it’s an over-riding concern for the league. I don’t think any of the teams are actively tanking, and we have new rules that address the situation…” “We’ve taken steps to address the perception. I don’t have any concern about the integrity of the competition as it’s playing out.”

One solution would be to conduct the draft lottery in reverse order, meaning the best finishing non-playoff team has the best odds of getting the first pick all the way down to the last place finishing team having the worst odds of winning the lottery.

To shake things up even more, the lots would be drawn in reverse order until finally arriving at the first pick. By making the order of the lottery picks completely random – with no guaranteed draft positions – this should all but eradicate any sort of “gaming” of the system.

Have any better suggestions of how to change the system? Let’s here them!