DENVER — Ryan Nugent-Hopkins scored twice as part of Edmonton’s four-goal second period, Mikko Koskinen stopped 39 shots and the Oilers extended their winning streak to four games with a 6-4 victory over the Colorado Avalanche on Tuesday night.

Connor McDavid added a goal and an assist as the Oilers improved to 8-2-1 since coach Ken Hitchcock took over the struggling team on Nov. 20.

Kyle Brodziak scored his first goal in more than a month, Leon Draisaitl added another in his 300th NHL game and defenceman Darnell Nurse got into the scoring act with a slap shot early in the third.

Mikko Rantanen, the league’s leading scorer, had two goals and two assists to give him at least a point in 12 straight games. It’s tied for the longest active streak in the NHL with Alex Ovechkin.

Colin Wilson and Gabriel Landeskog also scored for the Avalanche.

Edmonton was up 1-0 heading into the second before Nugent-Hopkins scored twice over a 4:11 stretch to chase Semyon Varlamov. Philipp Grubauer entered and McDavid quickly added another. 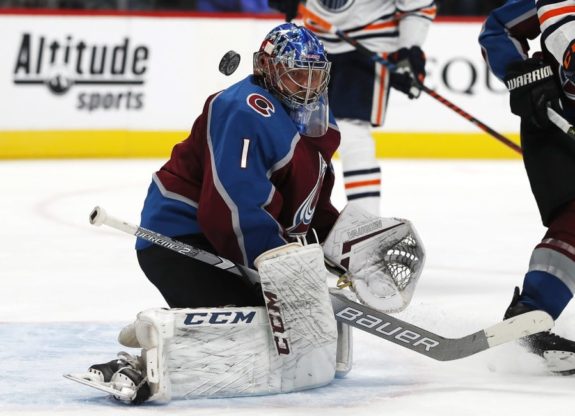 After Rantanen beat Koskinen, Draisaitl gave the Oilers a 5-1 advantage by knocking in a rebound. Nugent-Hopkins nearly had his third goal of the second period, only to have his wrist shot turned back by Grubauer.

Tempers flared in the third period, with Matt Calvert and Matt Benning squaring off. As Benning went to the visitors’ penalty box, a fan appeared to shatter the glass by tapping on it. Benning sat on a chair down the tunnel from the bench as the shards were swept up.

Trailing 6-3 late, the Avalanche pulled Grubauer and it led to Landeskog’s goal.

This has been a rough stretch for Colorado, which has allowed 21 goals over the last four games.

With his big game, Rantanen reached 52 points for the season.

“Mikko is one of the best in the league right now,” teammate Nathan MacKinnon said. “If he was in New York, he’d probably be in that conversation a lot more. Since we’re in Colorado, it’s tougher. He’s so good and so important for the team.”

NOTES: Nine different Oilers had an assist. … Avalanche forward Vladislav Kamenev will have shoulder surgery. … F Alexander Kerfoot was a scratch with an undisclosed injury. … The Avalanche recalled forward A.J. Greer from the Colorado Eagles of the AHL. … The Avs have played the fewest games at home so far this season. They’re 6-3-3 at home.

Oilers: Start a back-to-back Thursday in Winnipeg before a home game against Philadelphia.