Edmonton Oilers fans have always held a special place in their hearts for Sam Gagner. Although he never became an elite offensive talent, he was a quality top-six forward for the Oilers and never gave up on the team during seven consecutive non-playoff seasons. Gagner, who was acquired by the Oilers in a trade with the Vancouver Cancuks for Ryan Spooner on Feb. 24, told Scott Oake and Louie DeBrusk on CBC After Hour that he’s ecstatic to be back in the city where he began his NHL career.

I am so excited to be back with the @EdmontonOilers. I have so many great memories from my first time here and can’t wait to create more. The community and fan base has always been great to my family and it feels like we are coming home. #LetsGoOilers https://t.co/D0Sdq5Sl3c

Edmonton does feel like home to me. There’s just something about the city and the people and the passion they have for hockey that I love. And coming back here just reinforces that. At the time I was traded, it was probably good for me to go out and see some other things, and I feel like I’m better for it. I’m excited about the challenge of continuing to push forward and hopefully call this home for the rest of my career. – Sam Gagner

Here’s a look back at Gagner’s most memorable moments with the Oilers.

Gagner has dazzled fans with his exceptional hands in the shootout since his arrival in 2007-08. His signature move has always been to fake the wrist shot from the hash marks, then go backhand to forehand. While he displayed this move many times during his first stint with the Oilers, Gagner’s shootout marker against the Arizona Coyotes on Apr. 4, 2014 was surely his best.

With the Oilers trailing 2-1 late in the third period, then-head coach Dallas Eakins pulled goaltender Ben Scrivens for an extra attacker. Gagner dumped the puck into the offensive zone, which was stopped by Coyotes goaltender Thomas Greiss behind the net. Then, Jordan Eberle stripped the puck from Greiss and sent a pass out front that hit the skate of Zbynek Michalek and deflected into the crease, where Gagner scored on the backhand with 40.4 seconds on the clock to extend the game to overtime. 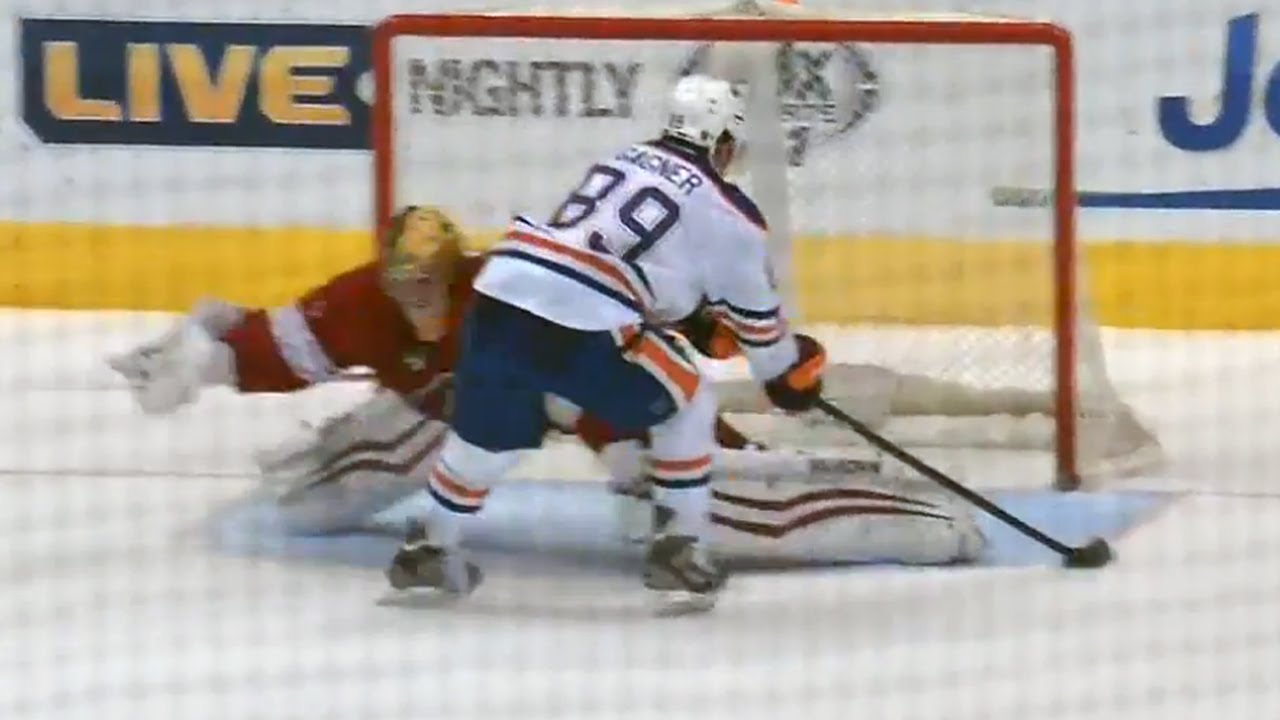 Oilers fans have historically traveled well to Glendale, and when Gagner put the puck in the net, the hundreds of fans dressed in orange and blue erupted. After neither team secured the victory in overtime, Gagner scored the only goal of the shootout to lift the Oilers to a come-from-behind win on the road in dramatic fashion.

Fighting for His Job

After a disappointing showing in training camp prior to the 2009-10 season, Gagner was demoted to the fourth line by newly hired head coach, the late Pat Quinn. So, during the Oilers’ home opener against the rival Calgary Flames on Oct. 3, 2009, Gagner asked Flames veteran Craig Conroy if he would fight him in the hopes of getting out Quinn’s doghouse. Conroy agreed to do the kid a favour. Then, two seconds after the Flames tied the game 2-2 in the second period, they dropped the gloves.

Gagner, who had fought once in each of his first two NHL seasons, took three shots to the side of the head before Conroy tore his helmet off. However, Gagner landed the best punch of the fight with a direct shot to Conroy’s nose. Two the middleweights traded a few more blows until Conroy fell to the ice and Gagner gave him one final shot before the officials separated them.

The fight ultimately helped Gagner get back on track offensively and earn some trust with his coach. Quinn put Gagner back onto the top line with Ales Hemsky and Dustin Penner, where he had 10 points in his first 10 games.

Coming into their game against the Chicago Blackhawks on Feb. 2, the Oilers sat in 14th place in the Western Conference standings, and were basically out of playoff contention with 33 games left to play. Gagner had also been struggling with just two assists in his previous nine games. No one could have imagined that Gagner would have one of the greatest performances in franchise history that night.

Trailing 2-0 early in the second period, Gagner sent a precise stretch pass to Taylor Hall who shrugged off a check from Brent Seabrook and beat Corey Crawford with a wrist shot to cut the deficit in half. Less than five minutes later, Gagner skated in on a two-on-one with Ryan Smyth, but his saucer pass was blocked by a sprawled-out Nick Leddy. However, Gagner picked up the loose puck, circled the net and buried it to the tie the game 2-2.

Before the end of the period, Gagner tried to dangle through three Blackhawks players, but had the puck knocked off his stick and onto the blade of Ryan Whitney who unleashed a rocket to give the Oilers their first lead of the night, and Gagner his third point of the period.

With the game tied 3-3 in the third period, Gagner continued to dominate offensively. Early in the frame, Eberle curled out of the corner and set up Whitney for a one-timer that he whiffed on and went wide of the net. But Gagner was there to bury the bouncing puck off the boards behind the net. Everything he touched that night went in.

Less than two minutes later, Gagner picked up a secondary assist on Cam Barker’s goal to give him five points. After picking up a loose puck in his own end, Gagner chipped the puck down the ice to Hall who skated past Niklas Hjalmarsson to gain possession in the offensive zone. Hall then spotted Gagner streaking into the zone out the corner of his eye and hit him with a pass that beat Crawford blocker side to match his father, Dave Gagner, who also had a six-point game in the NHL on Apr. 12, 1994.

With 5:29 to play, Gagner buried a beautiful touch pass from Eberle for his fourth goal and seventh point. Less than two minutes later, Gagner returned the favour by setting up Eberle for a goal to lift the Oilers to an 8-4 victory on home ice and give Gagner his eighth point of the night. Gagner tied Wayne Gretzky and Paul Coffey’s shared team record for most points in a game. He also registered his 200th career NHL point and received first, second and third star honours.

The then 22-year-old became just the 13th player in NHL history to score eight or more points in a game and the first since Mario Lemieux on Dec. 31, 1988. Gagner and Lemieux are also the only two players in NHL history to score eight points on all eight of their team’s goals in one game. Every Oilers fan who watched that game will never forget it.