The 2013-14 season is winding down and members of the Calgary Flames are set to head out for their long summer holidays.

The questions begin in earnest:

Will Michael Cammalleri return to play for the Flames next season? Highly unlikely.

Who will the Flames draft with their top 5 pick? Depending on the results of the lottery, it looks like Calgary will pick fifth overall. The NHL Central Scouting lists left winger Michael Del Colle of the Oshawa Generals fifth on its final report. The team could use another top notch centerman like Sam Reinhart (whose father played for the Flames) or Leon Draisaitl for a one-two punch with rookie Sean Monahan. 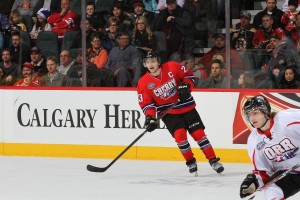 Who will become the Flames’ new General Manager? Brian Burke promised he won’t be in the GM seat come training camp in the fall. Former Flame All-Star Joe Nieuwendyk has been mentioned but it’s all speculation for now.

Who will emerge as the next rookie to have an impact on a rebuilding Flames team? Max Reinhart or Markus Granlund could stick permanently next season after making a good impression in Abbotsford and a few games in Calgary. Is Sven Baertschi finally ready to be a consistent performer in the big league? He has been playing much better in the past month in Abbotsford and will be given a big opportunity next season.

Will any of the college kids stick around with the Flames in the fall? Probably not as Ben Hanowski and Kenny Agostino need to gain experience playing in the AHL before graduating to the NHL. It would be another step in the right direction if the Flames can bring Boston College linemates Bill Arnold and Johnny Gaudreau to Abbotsford.

Who will be in goal for the Flames in 2014-15? Karri Ramo will definitely be back. Since his return from injury last month, Ramo has been good most nights and spectacular on occasion. He enters next season as the team’s #1 goaltender. Who backs him up? Is Joni Ortio better off playing a lot in Abbotsford or is he ready to push Ramo in Calgary? 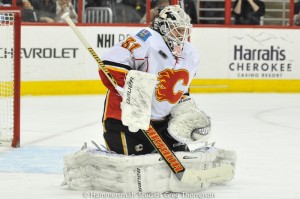 Will any of the Flames’ veterans be traded, possibly at the draft? Defenseman Dennis Wideman may not be needed as much with the emergence of TJ Brodie on the top pairing with captain Mark Giordano, Kris Russell raising his game to another level, and rookie Tyler Wotherspoon playing well in his first few games with the Flames. Unless the team gets a great offer, none of the major forwards will likely be moved with the loss of Cammalleri.

Will the Flames sign any free agents in the summer? Not likely since few players available will want to join a team in the middle of a rebuilt. If Calgary signs anybody, it will be a veteran forward to help the rookies up front or a veteran presence on defense if Chris Butler isn’t resigned and/or Wideman is traded.

Will the Flames finish near the bottom of the standings again next year? Probably but the improvement will continue. It may be that the team has at least one more year to bottom out. With the work ethics of coach Bob Hartley and the willingness to play hard even after being eliminated from the playoffs, the Flames are creating a positive environment for the future. It’s important for the new players, especially the rookies, to learn how to win. It appears everyone is on board, including the veteran players. The rebuilt in Calgary may be a bit quicker than expected.