As the National Hockey League continues to evolve, the ripple effect can be seen in every league providing it young talent. Along with the demands for changing skill sets comes new developmental regimes, styles of play and consequently, a new method of evaluating prospects. This is especially true with defensemen, who’re experiencing a great deal of change in the role they play. As such, scouting for European defensemen may require a different approach than their North American counterparts.

The first contributing factor to this change is the global growth of hockey, which we can thank increased media coverage. This growing interest in hockey outside of Canada translates into increased participation at the grassroots level. As participation increases, so too does the level of talent. Over time, the caliber of talent rises and with greater talent comes more national wins and with that comes more media coverage.

The influence of “Euro flair” has become a well-adopted term when describing the unique finesse European players bring to the ice and to their wardrobe off of it. This wide range of valuables brought to the North American game is greatly appreciated, both in terms of aesthetics and entertainment.

Yet their contributions to the league’s evolution may be undervalued.

Between the 2005 and 2015 drafts, 129 European defensemen developed in European leagues were drafted to the NHL (this number does not include defensemen who were drafted while playing in Europe and then crossed the pond to play in the CHL, USHL or NCAA). Of these 129 defensemen, only 36 have played in at least 30 NHL games and of these 36 defensemen, 72 percent were drafted after the first round.

Throughout these 10 drafts, the projection given to European picks has been largely underrated and it begs the question of why?

Contrary to popular belief, a closer look at player’s nationality and styles of play doesn’t reveal any concrete evidence that a single nationality plays a specific style of hockey. Instead, we’ll find that certain leagues are more likely to develop players in a way that fosters a specific style and this observation isn’t restricted to leagues in Europe.

Over the last 10 drafts, there have been numerous European defensemen drafted out of European leagues who’ve gone on to have success at the NHL level. Interestingly, the majority of these European picks were drafted after the first round, many of which were developing in the Swedish Hockey League (SHL) during their draft-eligible year.

After taking a look at some of the prospects eligible for the 2017 draft and the league’s they’re playing in, some interesting findings arose. Below, I’ve categorized seven groups of players, each consisting of 10 top defensemen and/or defensemen with the highest point-per-game played rates into each category: 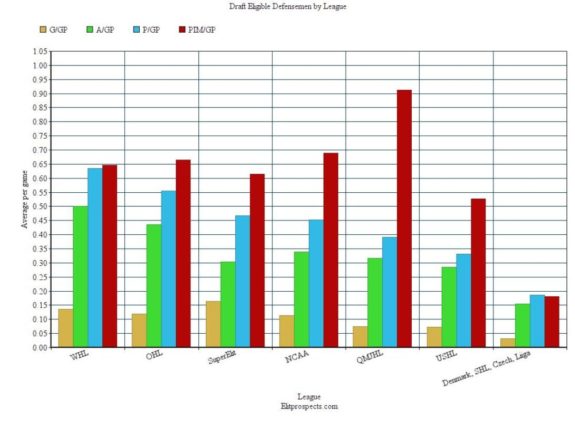 As you can see, European defensemen developing in the SuperElit league rank highest for most G/GP. However, that’s only because the G/GP rates of Erik Brännström and Timothy Liljegren were included. This season, these two defensemen have also played in the SHL, so when comparing their scoring rates from the SHL, they rank among the lowest of all defensemen ranked for G/GP. Furthermore, the European leagues with an average age range between 22-27 have lower G/GP, A/GP and P/GP rates of all the league categories.

1. Dylan Coghlan of the WHL’s Tri-City Americans ranks among top defensemen for most goals, assists and points per-game-played while remaining among the lowest for PIM/GP.

2. Artyom Minulin of the WHL’s Swift Current Broncos and Adam Thilander of the OHL’s North Bay Battalion ranks among top defensemen for most assists per game played while remaining among the lowest for PIM/GP.

3. Erik Brännström, Timothy Liljegren and August Berg of the SuperElit league are the only defensemen playing in Europe who’re among the top defensemen for most G/GP.

5. Defensemen in the QMJHL rank first for most penalty infraction minutes: 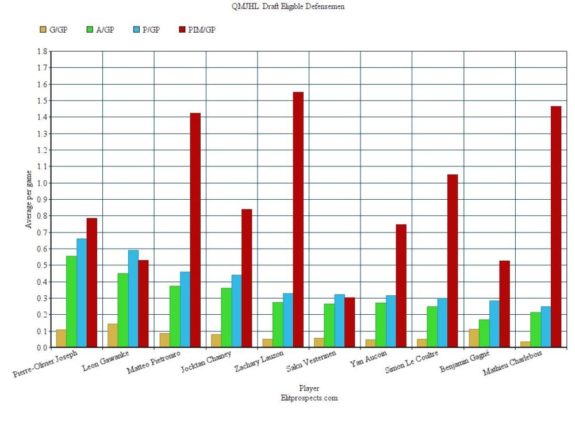 The general lack of offensive contribution from European defensemen developing in European leagues, who’re competing against older players may have something to do with the low number of European league-developed defensemen getting drafted. When it comes to defensemen in these leagues, there are simply more variables influencing their trajectories.

We all know elite European defensemen exist because guys like Roman Josi, John Klingberg and Erik Karlsson have made big names for themselves in the NHL. However, the league’s ability to project the offensive capabilities of European league-developed defensemen seem to be based on point production in the seasons leading to and including their draft-eligible year. The style of defensive play fostered in these leagues seems to be one of lower offensive contribution, though, and that means only players who defy the status quo will truly be seen as first round picks.

Let’s take a look at Klingberg for a moment. He was drafted by the Dallas Stars in 2010 during the fifth round and during the 2009-10 season, his point production was quite low: 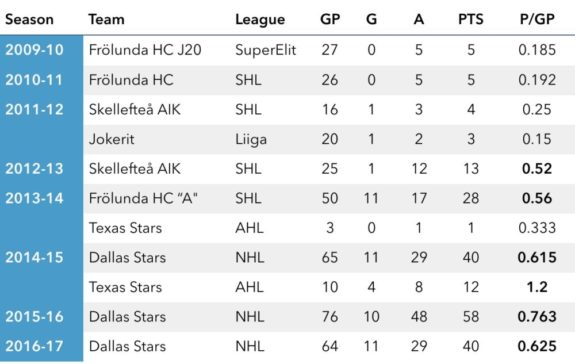 It wasn’t until his third season playing in the SHL when he started making massive changes in point production. How can this be explained? Klingberg’s low point production in 2010 was likely the reason he was drafted in the fifth round but could the Dallas Stars have spotted his potential at that point? What’s interesting about the Stars is during this 10-year time period (2005 to 2015), they’ve drafted the most European defensemen out of Europe who’ve played in at least 30 NHL games. Although that’s only five players, it’s still more than any other team.

The hunt for top defensemen is already underway and this year’s entry draft will be somewhat different than the previous drafts. It’s not just because of the league’s expansion but also because of the defenseman’s evolving role and the need for additional skill sets. Gauging trajectories for this new breed of blueliners means teams should be using a new set of criteria for their list of must-haves.