Throughout the last two decades, the popularity and participation of hockey have increased around the world. The underlying driving force of hockey’s growth is the result of increased media coverage. This growing interest translates into increased participation at the grassroots level. As participation increases, so too does the level of talent. Over time, the caliber of talent rises, and now more diversity exists in the NHL.

Up until the 1970s, the National Hockey League had been mainly comprised of Canadian players.

Things are changing now, thanks to new media.

The early 1970s experienced a mass influx of non-Canadian nationalities playing in the NHL, the greatest rise being held by Americans. 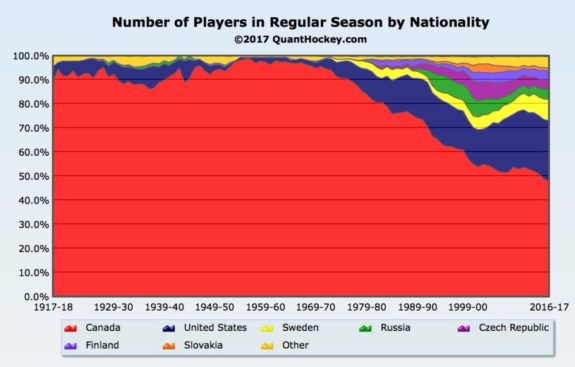 The NHL’s popularity in the United States is largely due to the continual growth of media coverage. Ice hockey participation in the U.S. has increased by nearly nine percent since 2010, according to the International Ice Hockey Federation (IIHF).

In November 2013, the NHL embarked on a 12-year, $5.2-billion media rights agreement with Rogers Communications. This meant all national rights to NHL games would be exclusive to Rogers beginning in the 2014-15 season.

Since then, the NHL sold overseas distribution rights to IMG in October 2015, which provides NHL game coverage to the United Kingdom. NHL media rights were also sold to Eurovision to broadcast games in Russia. Beginning in the 2016-17 season, NHL games have become more accessible to Russians than they’ve ever been. Modern Times Group also entered into a five-year partnership renewal deal with the NHL. This includes broadcast and online exclusivity rights for NHL games across the Nordic countries.

New digital advancements are quickly making their way onto the hockey world’s center stage. Gary Bettman, the NHL’s commissioner, has proven to be a reliable source of change when it comes to growing the league globally. Bettman has embraced change time and time again, and he’s done so with open arms. In early 2015, the NHL entered a multi-year partnership with SAP SE, now known as the official cloud software provider of the NHL. This technology provides fans with data and enhanced analytical insights unlike any the league has ever witnessed. Starting in the 2016-17 season, the NHL’s website also started offering out-of-market fans with enhanced live game digital streaming.

The World Cup of Hockey became an event to endure changes too, as new technology like microchips were embedded into the puck and player jerseys. Tablets were integrated onto benches and around the rink for coaches to use as needed. Rogers started offering NHL games in 4K, and the NHL launched a new arena app in 2016.

Teams and fans aren’t the only beneficiaries of Bettman’s open-arms policy either. Digital sponsorship innovations are just as much a priority to growing the game, as enhancing the fan experience. The World Cup allowed sponsors to experiment with virtual ads on rink boards. Other new digital media sponsorship opportunities are constantly rolling out in the NHL, especially with social media campaigns.

Fans everywhere are getting more access and instant access to their favorite teams with greater ease than ever. As a result, the demand for print media has decreased substantially. In fact, Rogers digital consumer magazine revenue is exceeding its newsstand revenue by 50 percent. Furthermore, beginning January 2017, the Rogers Sportsnet magazine will no longer be available in its print format. This is one of several print editions the media conglomerate has eliminated in an effort to meet their audiences where they are.

As new media quickly floods the hockey scene, the internet is quickly becoming the main touch-point for fans. This includes those residing in non-North American countries, with a focus being in Europe where the game is seeing a great deal of growth. According to the IIHF 2016 Survey of Players, the Czech Republic ranked third of top hockey nations in the world. This isn’t surprising considering where the majority of European players are coming from in the CHL Import Draft. As expected, the Czech Republic has seen the most players drafted since 1992 by far.

The NCAA is also seeing more European players now than ever before. Their Division 1 men’s hockey program has an all-time high of 82 European hockey players enrolled for the 2016-17 season. Furthermore, North America produced 23 of the 30 first round draft picks of the 2016 NHL Entry Draft. Countries overseas are indeed producing some of the league’s most elite talent and it’s happening at an increasing rate. With larger talent pools forming around the world, the CHL, the NCAA and the NHL are experiencing greater diversity. This also means their corresponding fan bases are as well.

Nations outside of North America have been gaining traction in hockey’s high-calibre department for quite some time. Although Team Europe did not win the 2016 World Cup of Hockey, they were very close to beating Canada, who managed to score two goals during the last 90 seconds of the final game, for a 2-1 victory.

On television, 3.1 million Canadians watched Canada versus Russia in the World Cup’s semifinals, which was the highest-rated game in the past year. According to the IIHF, Russia is seeing serious growth in hockey participation, as participation in the sport has increased by 61 percent between 2010 and 2016.

Since 1994, there’s been six Winter Olympics. Although Canada has won half of these gold medals (2014, 2010 and 2002), European countries have won the others: Sweden (2006, 1994), and the Czech Republic (1998). An astounding 15 million Canadians watched the 2014 Sochi Winter Olympic men’s hockey game when Canada beat Sweden to win gold. However, Canada’s victory against Team USA in the 2010 Olympic gold-medal game was the most-watched hockey game in the U.S. in 30 years. Nearly half of the Canadian population watched the entire game on average (16.6 million viewers), while 80 percent of Canadians watched some part of the game (26.5 million).

The difference in viewership numbers between the 2010 and 2014 Olympics is largely due to countries who played in the gold-medal games. The rising popularity of hockey in the U.S. is feeding American competition, which raises a new challenge for Canadian players. As any champion rises to the challenge, so do their viewership ratings upon success.

Finland is also seeing a rise in viewership ratings and has experienced a 14 percent increase in hockey participation between 2010 and 2016. During the 2016 World Junior Championships, 15.3 million Canadians tuned in to watch Finland beat Russia, 4-3, in overtime. Almost 2.5 million Finns tuned in for at least part of the tournament’s final game as well. That’s a little less than half of Finland’s population.

Historically, World Junior games haven’t drawn a great deal of interest in European countries, except for when the host country competes in the gold-medal game. During the 2016 World Juniors, though, the tournament was broadcast live in nine of the 10 participating countries for the first time ever.

The Canada-Finland quarter-finals also drew 2.55 million Canadian viewers on TSK and RDS, which was the second-highest Canadian audience. The Canada-United States preliminary-round on Boxing Day, though, had the best rating and attracted 2.9 million viewers.

Hockey’s growth in new markets has spawned greater talent, and with more talent comes more national wins. One of the many ripple effects this has on non-traditional hockey markets is an increased demand for coverage. In essence, new media is the driving force growing the game on a global scale.

Although its impacts are not immediate, media coverage generates interest for hockey in new markets. In turn, hockey participation rises in these markets, and therefore so does their level of competition. With greater competition comes greater talent, and with greater talent comes more wins. This then fuels viewership ratings and resets the global growth cycle for hockey once again.