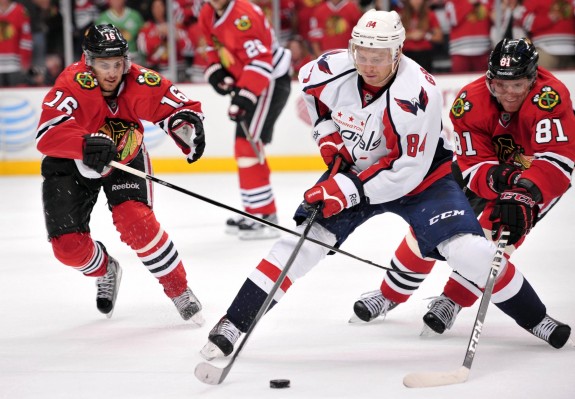 With their six-season playoff streak snapped, the Washington Capitals are facing a number of questions. The blame game is in full swing, with its targets ranging from the coaching staff to GM George McPhee to Alex Ovechkin. Pinpointing where exactly the Capitals went wrong is difficult, but determining how to get the team back on track is arguably tougher.

Regardless, the conversation begins with a hard, honest look at the team’s roster. With the exception of defense, there are few glaring deficiencies. However, McPhee’s moves at the trade deadline–swapping Michal Neuvirth for Jaroslav Halak and obtaining Dustin Penner–were more than minor tweaks to the roster. With Halak, Penner, and summer acquisition Mikhail Grabovski set to become UFAs at the end of the season, it’s imperative the Capitals think carefully when deciding who to re-sign.

The search for a number-two center came to a temporary close with the signing of Mikhail Grabovski, whose buyout paved the way for a three-million dollar contract with the Capitals. Grabovski was arguably the most underrated forward available last offseason, thus making him an absolute steal for the Capitals. In 58 games played (22 were missed due to a sprained ankle), Grabovski scored 13 goals and tallied a total of 35 points.

His predecessor, Mike Ribeiro, was a point-per-game player and dominated on the power play. Ribeiro’s inflated numbers established lofty expectations for his successor, and while Grabovski didn’t match Ribeiro in terms of production, he was one of the Caps’ strongest puck-possession players–an absolute necessity, given that the Caps struggled tremendously in that area.

Grabovski’s strong performance was accentuated by his versatility, as he centered a variety of linemates and even took on the role of a first-line left winger. A versatile, productive forward who meets the criteria for a second-line center is always an asset, particularly for the Capitals. Fortunately, Grabovski has expressed interest in making D.C. his home for several seasons, although he stated that a decision wouldn’t be made until the Capitals’ future is a bit clearer.

On the flip side, re-signing Grabovski isn’t a clear decision for the Capitals. The lack of a clear 2C must be addressed with the team’s future in mind, but Grabovski’s age and long-term interests may not be the right fit. At 30, he is seeking a lengthy contract and will want a pay raise. Even if the Capitals are willing to make that kind of commitment, cap space could be an issue. Accommodating an older forward with a large cap hit will be challenging, particularly if the Capitals already have the kind of player they’re looking for: Evgeny Kuznetsov made his long-awaited arrival in D.C. late this season, with promising results.

At 21, Kuznetsov is an up-and-coming offensive talent. His role with the Caps isn’t yet clear, especially as he continues to adjust to the North American game. Furthermore, Kuznetsov is a natural winger–not a center–which makes Grabovski appealing.

Mathieu Perreault was dealt to the Anaheim Ducks for a fourth-round pick–the same one the Capitals would later return in exchange for Dustin Penner. Acquired at the trade deadline, Penner possesses a large physical presence that complements his two-way game nicely.

His plethora of postseason experience is also valuable, as he’s a two-time Stanley Cup champion. The Capitals lack players with playoff experience–Troy Brouwer is currently the only Capital to have hoisted the Cup, and while he’s become one of the team’s strongest leaders, the team clearly needs additional veterans with successful playoff runs under their belts.

Despite his impressive resume, Penner failed to make much of an impact with the Caps. In 18 games played, he tallied one goal and three points. These disappointing numbers are likely the result of being mishandled; he spent the majority of his time as a Capital on the fourth line with Jay Beagle and Tom Wilson. As a former linemate of Corey Perry and Ryan Getzlaf, Penner clearly had the ability to play a top-six role–but he was never afforded the opportunity to play with Nicklas Backstrom, Alex Ovechkin, and Marcus Johansson, or any combination thereof.

Penner hasn’t been vocal about his desire to return to the Caps, although he indicated that he would “entertain any and all offers.” Although the Caps could stand to increase their depth at left wing, it seems unlikely that Penner will return next season.

Many of the Capitals’ problems were masked by remarkable goaltending, courtesy of no less than four netminders: Braden Holtby, Michal Neuvirth, Philipp Grubauer, and Jaroslav Halak. Neuvirth was eventually shipped to Buffalo in return for Halak, a former Blue who had been acquired by the Sabres at the trade deadline. Even before Neuvirth’s departure–which he requested due to a logjam at his position–the Capitals had plenty of goaltending talent available in D.C. and Hershey.

Yet, Halak wound up as the team’s starter (for all intent and purposes) by the end of the season. He compiled a 12-5-4 record, posting a .930 save percentage and 2.31 GAA. Those numbers comprised a relatively small sample size, but Halak performed very well during his time in D.C. However, does his performance merit his current cap hit of $3.75 million?

Even if it does, the Caps have other netminding options. Holtby’s disappointing season can be chalked up to a combination of lost confidence and the changes he attempted to make to his game. While he’s no longer a shoo-in for the role of starting goalie, he seems intent on earning the position. It’s probable that he’ll have a good shot at doing so if the Caps don’t re-sign Halak. Should Holtby compete for the number-one spot, the Caps have a good back-up option in Grubauer, who has flourished for the past two seasons.

Grubauer went 6-5-5 this season during his call-up to Washington with a .925 save percentage and 2.38 GAA. These were encouraging numbers for Adam Oates and his coaching staff, who rewarded him with a number of consecutive starts. The decision left Holtby and Neuvirth behind the bench and in the press box before Grubauer was sent back to Hershey.

Should the Capitals take a gamble and not re-sign Halak, they’ll have lost a steady veteran presence in net–the same one that helped crush playoff dreams just a few postseasons ago. But handing the reins to Holtby might be what’s needed to help him regain his confidence, and allowing Grubauer to accelerate his development in the NHL could make for one of the strongest, most solid goaltending tandems the Capitals have seen in a while. Good, young goalies are difficult to find, and these two could help create a brighter future for their team.