The San Jose Sharks have qualified for the Stanley Cup Playoffs for the past 10 straight seasons. Having never reached a Stanley Cup final while boasting some of the league’s most talented teams, fans around the league love to say the Sharks “choke” come the playoffs. Even before becoming the fourth team ever to blow a 3-0 series lead, this was a popular jab at the Bay Area organization. But truthfully, it’s far from a fair label.

San Jose’s streak started back in 2003-04, as a team that finished the prior season 13th in the Western Conference, won their division. They certainly overachieved based off their talent level and came up six wins short of a Stanley Cup. In 2005-06, the Sharks were in the midst of a long losing skid when they acquired Joe Thornton in late November.

That team went on to finish fifth in the Western Conference, beat the fourth seed Nashville Predators in round one before losing in the next round to the Edmonton Oilers. Those Oilers by the way came within one game of winning the Stanley Cup. The following year the Sharks finished fifth again, beat the Predators again in round one, only to succumb to the Detroit Red Wings. Those Wings would win the Stanley Cup the very next season. San Jose meanwhile won their first round series vs Calgary in 2007-08 and were an overtime goal short of forcing a Game-7 in round two against Dallas. 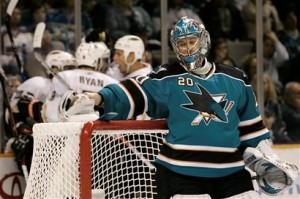 Can the Sharks avoid another post-season collapse?

It is nearly impossible to say those playoffs were choked away. The real choking label grew popular the next season when the Sharks won the President’s Trophy for the best regular season record in hockey. They finally played a full season with a legitimate puck moving defenseman in Dan Boyle and had two talented scoring lines with Joe Pavelski having a breakout year with 59 points. Unfortunately for the Sharks, they ran into a buzz-saw eighth seed Anaheim Ducks, who were on fire down the stretch of the regular season. Just two years removed from winning a Stanley Cup, the eighth seeded Ducks still featured the lethal defense combination of Scott Niedermayer and Chris Pronger. Even with those two future hall of fame defenseman, the Sharks pummeled goaltender Jonas Hiller with 230 shots over six games. That is an average of 38 shots per game, and Hiller allowed just 10 goals for an absolutely ridiculous .956 save percentage. At the other end Evgeni Nabokov only faced 155 shots and gave up 17 goals for an .890 save percentage. That is not choking, that is getting incredibly unlucky.

During the following year the Sharks went out and re-loaded with a top sniper, perhaps thinking shot placement on Hiller wasn’t good enough. In came Dany Heatley who helped the Sharks to a second straight No. 1 seed with 39 goals. The Heatley, Thornton, Patrick Marleau line helped the Sharks relatively breeze through the first two rounds of the 2010 playoffs. While it took them six games to beat the Colorado Avalanche, wins in Games 5 and 6 were never really in doubt, and they knocked off their rival Red Wings in five games the following round. Unfortunately, up next is where they really got unlucky. In the Western Conference final they went up against the 2010 Chicago Blackhawks. Yeah, those Chicago Blackhawks. The best NHL team top to bottom over the last decade easily dispatched the Sharks in a four game sweep.

One year later the Sharks would return to the playoffs as a second seed in the Western Conference. They were running three strong forwards lines going into the playoffs. In the first round they beat a Kopitar-less Kings in six games, then nearly blew a 3-0 lead to the Red Wings before prevailing in a Game 7. In the Western Conference final they lost to the better team for a second straight season. There is an argument to be made that the Sharks could have won that series. Had Ben Eager not taken stupid penalties in Game 2, and had that stupid stanchion not redirected the puck so only Kevin Bieksa could find it in overtime of Game 5, maybe the Sharks win the series. However, the better team moved onto the Stanley Cup final. 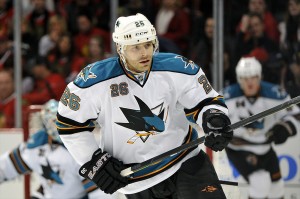 The next season is where the Sharks started to really make some crucial mistakes. Despite having a nice playoff run with Pavelski at third line center in 2011, they moved him up to the top line for 2011-12. They signed Michal Handzus to be their third line center and that move turned out to be a terrible choice. Handzus struggled his entire year-and-a-half with the Sharks. San Jose would finish the 2011-12 season just seventh in the conference. Despite a mega huge performance from Thornton, the Sharks would lose to the St. Louis Blues in five games in the first round, their shortest playoff appearance ever. Certainly didn’t choke anything away, there was nothing to choke.

In 2012-13 the Sharks got back to what made them great. With Brent Burns moved up to forward in the middle of the season, that allowed them to once again bump Pavelski down to third line center. These moves put together turned their scoring woes around. Instead of being a team struggling to score five-on-five, that became a strength. In the first round of the playoffs, the sixth seeded Sharks swept the Canucks for their first ever playoff series sweep. Facing the Kings in round two, the Sharks’ top line featuring Thornton and Burns territorially dominated the play, but injury to Martin Havlat and suspension to Raffi Torres didn’t help San Jose’s depth. All in all they still managed to take the Kings to seven games and were one goal short of forcing Game 7 into overtime. 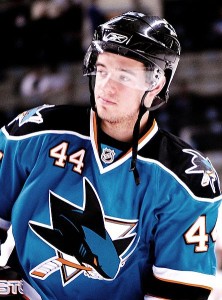 It is trouble if Vlasic were to go down…. Ivan Makarov/Wikipedia

And finally we get to last season where if you want to call blowing a 3-0 lead choking, you actually have a fair argument. That said, there is one of the most legitimate excuses available for this series. As many have noted, the Sharks probably go on to win that series if they don’t lose Marc-Edouard Vlasic to injury early in Game 5. One of the best defensemen in the world, Vlasic was having arguably the best season of his career. Kings fans like to disregard losing to the Sharks in 2011 because Kopitar was hurt. Sure this wasn’t for the entire series, but Vlasic going down for the majority of the last three games (75% of LA’s wins in the series), was a major factor.

Out of 10 straight playoff appearances, there is only one season where you could argue the Sharks “choked” away a series. Even then, there is a strong argument to suggest otherwise. The consistent label of the Sharks “choking” come the playoffs is simply put, a false narrative.