We always take a chance to review a new edition of Hockey Prospectus 2013-14 Guide. A further analysis was needed so we gave it a shot. There is something about this book that made us smile warmly. The advanced metrics and statistics are easily explained and interpreted. That is always the most striking aspect of these editions of the digital book. It may be complicated and yet the explanations are understandable.

For the advanced stats buffs, this is as close to hockey nirvana as you may ever come in an easily digestible format. Everyone remembers a point where advanced stats was considered almost taboo like a kiss of death. Now it is everywhere. The HP book weighs in at a behemoth 500 plus pages but for our purposes I focused on the New Jersey Devils. What I found was more than I could have expected. I have owned past editions along with several other e-books.

Now how about a few Devils snippets? Again, do not let the visuals intimidate. John Fischer of In Lou We Trust wrote the foreword for New Jersey.

Your eyes see a player usage chart. It looks like something out of a fill in the bubbles experiment yet reveals a lot. There are new charts at your disposal, including the Cap Efficiency Chart, Offensive Profile Chart, and Special Teams Usage Chart. These are fairly easy to read and reveal a lot of information. A picture is worth a thousand words. In this case, try several thousand. Advanced stats made easier is a big reason why Hockey Prospectus is able to do what it does.

Let’s take a look at the Cap Efficiency Chart. This has a few interesting quirks for New Jersey. 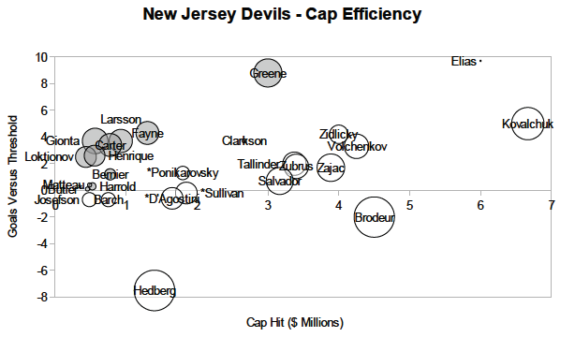 The cap efficiency chart reveals just how inept New Jersey was at times last season. Even Ilya Kovalchuk, who is now gone, has a relatively low GVT compared to his cap hit while Andy Greene and Patrik Elias were approaching double digits. It is not a surprise that two of New Jersey’s best players were Greene and Elias. If a few more had pulled their way, the Devils may have just been able to make the playoffs.

While we are at it, it is time to take a look at the total performance chart of Patrik Elias. The 37 year old has produced some off the chart fantasy hockey numbers which indicate just how underrated he really is.

Simply Patrik Elias is a player who despite Hepatitis has still found a way to defy father time. With his undying work ethic, he is a main reason why New Jersey still has a chance to make the playoffs this year. He has also been very healthy, missing only two games in the last three seasons. In a lot of ways, as Elias goes, New Jersey may go (at least from the offensive side of things.

It will be interesting to see how Cory Schneider plays into these numbers but that may be for another time. Hockey Prospectus has this 508 page guide at the palm of your hands for a low price of $24.95 in paperback and $14.95 via digital copy.

Personally for someone like me, the GVT (Goals Versus Threshold) and VUKOTA projections help make faster predictions which helps immensely. Granted, I may use my scouting instincts a lot but any little edge helps. Thanks to Timo Seppa and company, I can maintain that edge and so can you. You will not be disappointed. It is that simple.