The Philadelphia Flyers begin the regular season in about a week and they are expected to have a key piece of their offense healthy for the start of the season. The expectations will be high for Nolan Patrick in his second season with the Flyers, and he should have a breakout campaign.

Patrick was injured for the offseason in the past two years so he couldn’t get a full summer of training in. The Flyers drafted him in the 2017 NHL Entry Draft knowing that he had offseason surgery and may not be ready.  Patrick somehow managed to make the team out of camp even though he wasn’t anywhere near 100 percent. The center had a rough start to his rookie season, but he finished it strong.

The 20-year-old is completely healthy for the first time in two years. He did not have any restrictions in the summer, and was able to get in some good training. In camp, he has been skating better and not showing any effects of the surgery last year. The health of Patrick will play a big role in just how successful he is for the season.

Flyers Hope Patrick Can Build Off of Rookie Season

His rookie season got off to a slow start. Patrick was not at 100 percent and he was still getting used to the speed of a NHL game. Once he got comfortable and started to contribute, he missed some time due to another injury. In the first 40 games of his rookie season, the center only had three goals, seven assists and 10 points. On Jan. 31, 2018, he was moved up to the second centering Wayne Simmonds and Jake Voracek and that is when his season took off. 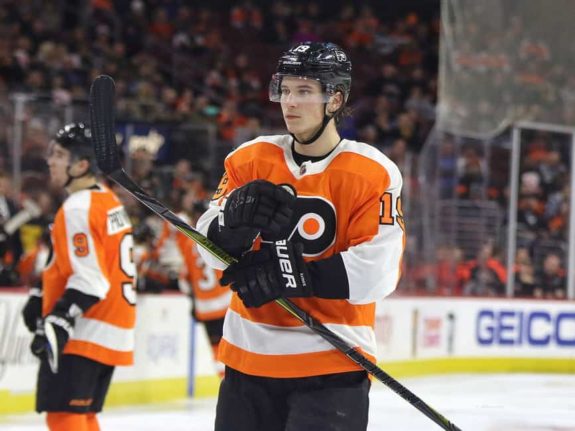 It was clear that Patrick was finally feeling like himself since the skating and playmaking was back. The center also seemed to gain some confidence after he was given a bigger role by the coaching staff.  He was also moved off of the dismal second power play unit and onto the first one after an injury caused Simmonds to miss some time, as well.  In the final 33 games last season, he had 10 goals, 11 assists and 20 points. The Flyers hope that Patrick builds off of the second half of his rookie season to avoid the dreaded Sophomore Slump.

In the offseason, the Flyers went out and signed James van Riemsdyk, who is figured to be playing on the second line with Patrick. This is an upgrade over the mishmash of players that he played with last season. I’m not saying he played with terrible players last season, but the addition of JVR will definitely help his point total. Voracek was the most consistent linemate of Patrick last season so those two have some chemistry on the ice. 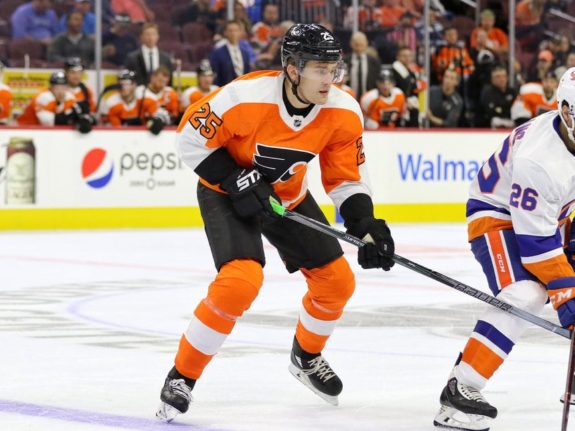 There is always that possibility that van Riemsdyk could take away some production from Patrick, but that won’t stop him from getting his points. The addition of van Riemsdyk to the left side will take some pressure off of Patrick so he could be open for more scoring chances. The focus just won’t be on Patrick to take the shot since JVR has no problem doing just that, whereas Voracek likes to rack up his assists.

Patrick Will Play a Key Role on the Power Play

Patrick will be on the Flyers power play this season, but what unit has not been determined. The coaching staff has been tinkering with each unit putting different players on different units. Wayne Simmonds has not played much this preseason and with all of the different players trying to make the roster, it has been hard to get a take on which unit Patrick will be on. It really won’t matter which unit he is on because he will produce on the power play anyway.

Wayne Simmonds has never shied away from the physical side of the game. (Amy Irvin / The Hockey Writers)

He can be used in multiple positions while on the man advantage. Patrick could play the half-wall and be one of the power play quarterbacks. The center can stand in the slot and fire some one-timers past the opposing goalie. One of the places he succeeded at last year while on the top power play unit was standing in front of the goalie taking his eyes off the puck, while waiting to bounce on a rebound or deflect a teammate’s shot into the net.

He is going to have a breakout season by putting up 25 goals, 30 assists and 55 points. The 20-year-old will be a big part of the Flyers offense playing in the top six forward grouping. If the chemistry can develop between himself and his wingers, watch out because that line will be dangerous and will put up some major points. The potential line of van Riemsdyk-Patrick-Voracek should spend a ton of time in the offensive zone since they win the battles along the boards and should be able to cycle the puck to get some scoring chances and extend zone time. 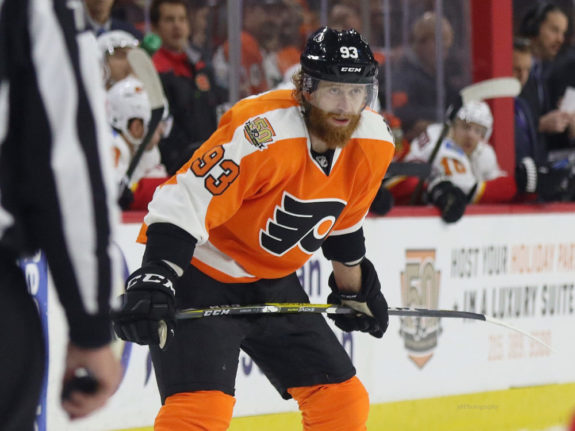 Jakub Voracek has become a major piece for the Philadelphia Flyers. (Amy Irvin / The Hockey Writers)

He will be in the top six grouping of forwards, so he will not have to worry about having the best defenders on him night in and night out since they will likely be matched up against the first line. This will free up the second line to do some damage. The coaching staff should put Patrick in a position to succeed in the offensive and defensive zone. He knows what to expect and should be adjusted to the speed of the NHL.