With Ted Nolan, head coach of the Latvian men’s hockey team, coming back to North America to also coach the Buffalo Sabres, the national team has finally been getting a bit of exposure. But other than Nolan’s ringing endorsement and a couple of players’ names, what do we really know about hockey in Latvia? Let’s take a deep dive to learn more.

Latvia is a small easter European country with a population of about 2 million inhabitants. Although the nation has had success in basketball and soccer, its true 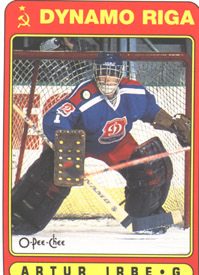 passion lies with hockey. The national team’s history dates back to before World War II, but would later become part of the Soviet Union.

The success of Soviet hockey boosted interest in the sport in Latvia. Several rinks were constructed and many Latvians began playing the sport on a local level. Latvia would eventually get their own team in the Soviet League – Dynamo Riga.

After the fall of the Soviet Union in 1992, Latvia reclaimed its national team with the inception of the Latvian Hockey Federation and eventually joined the International Ice Hockey Federation (IIHF). Starting out in Pool C, the nation slowly worked its way through the ranks. In 1993, Latvia would go on to win the Pool C tournament in Bleda, Slovenia after beating the Ukraine 2-0 in the final and advanced to Pool B.

Climbing out of Pool B would not be as easy. After twice losing in the final in 1994 and 1995, the Latvians hoped the third time would be the charm to qualify for Pool A. Only needing a draw in their final game against Switzerland, the team found themselves down 1-0 after two periods. Latvia would manage to muster a goal in the final frame to finally join the ranks of hockey’s elite.

The hockey federation’s next great achievement would come when they for the first time qualified for the 2002 Olympics in Salt Lake City.

Currently, Zemgus Girgensons is the only Latvian in the NHL, incidentally being coached by Nolan in Buffalo. In total, there have been 31 Latvian players taken in the NHL Draft, with 18 of them playing at least one game in the league. There are no Latvian players in the Hockey Hall of Fame, but three have been inducted into the IIHF Hall of Fame: goaltender Artūrs Irbe, defenseman Sandis Ozolins and forward Helmuts Balderis.

Many hockey fans know Irbe and Ozolins as being two of the most successful Latvians in the NHL. Ozolins is the all-time Latvian leader in NHL games played, goals, assists and penalty minutes, while Irbe is the all-time leader in wins and shutouts.

Balderis made his claim to fame at the international level, not with the Latvian team, but as a member of the Soviet Union, including the infamous 1980 team. Although he failed to capture Olympic Gold, he helped the Soviets capture three world championships (’78, ’79, ’83) and was named the best forward at the 1977 World Championships.

Balderis also was successful at the club level. He played the majority of his career in the Soviet Hockey League for Dynamo Riga and CSKA Moscow. He scored 333 goals, including leading the league in scoring in 1977 and 1984 and also was named player of the year in 1977. During the later part of Balderis’ career, he’d be drafted by the Minnesota North Stars and play 26 games for them, notching nine points.

Other notable Latvians include, Kārlis Skrastiņš, Raitis Ivanāns and Pēteris Skudra, who all have significant NHL experience.

Although Latvia has never made it past the quarterfinals in any major event, they have had wins against USA, Sweden, Russia and Belarus to boast about. They’ve also managed to qualify for the last four Winter Olympics, including the upcoming games in Sochi. The video below features some of Latvia’s top on ice moments.

Their best showings have come at the World Championships where they have managed to reach the quarterfinals four times, most recently in 2009.

Nolan has been the national team coach since 2011 and sees a very bright future for Latvian hockey. “The players and fans [are] very welcoming and very open,” said Nolan. “I couldn’t be more proud. For the size of the country, the talent level [is] very impressive.”

5 thoughts on “The History of Latvian Hockey”