In his first game back from a four-game suspension, Raffi Torres looked to assert himself physically like he normally does. He went out trying to hit everything that moved, and he picked up an early penalty because of this desire. Then, in the middle of the second period, he nearly decapitated Brent Seabrook on a hit behind the Chicago net: 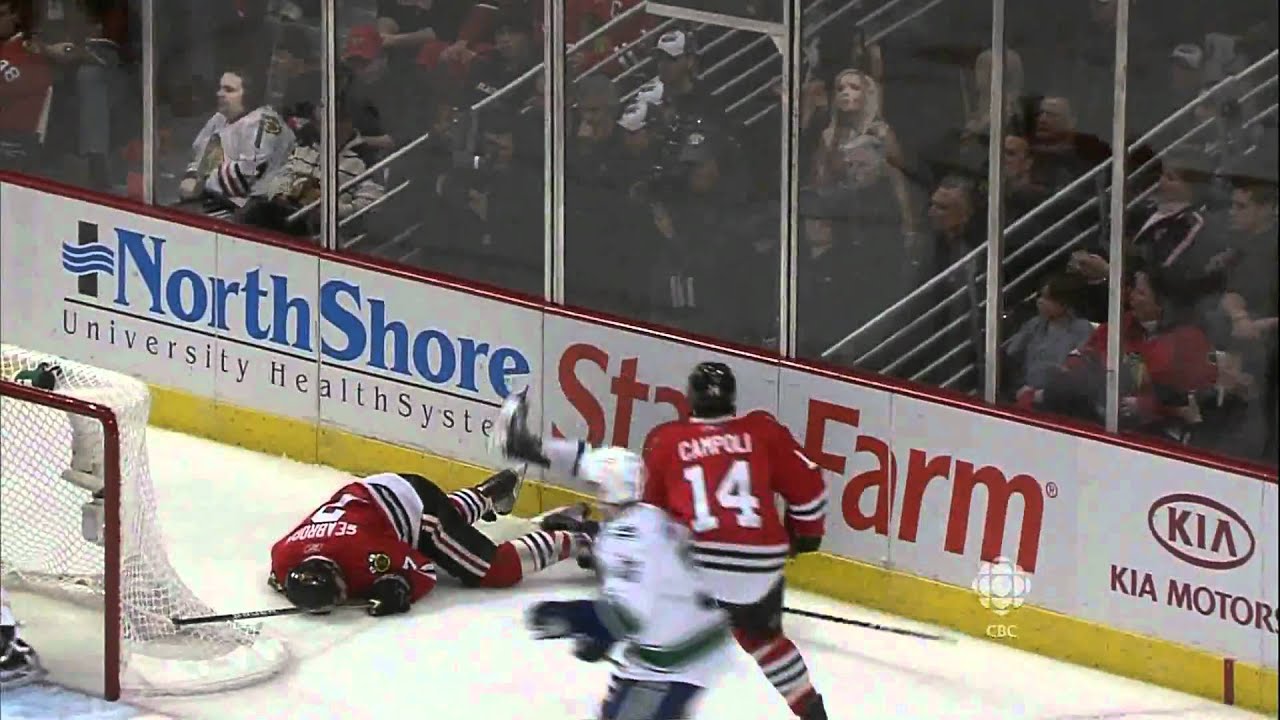 Instantly the internet was abuzz with talk about the hit. Rage emanated from Blackhawks fans, Canucks fans slowly backed away from their player, and hockey pundits from everywhere began debating the same thing: how many games should Torres sit out for? In addition to that, how on Earth could the referees officiating the game only give Torres a two-minute minor for a hit that was that reprehensible?

Before we start arguing whether or not the play warrants a suspension, it would be appropriate to break down the play for the various components that go into determining a suspension. To start with, the puck was near Seabrook on the play. He was looking down to play it, and Torres undoubtedly saw that Seabrook had his head down to do so and went for the hit. Unfortunately for the Canucks’ defenseman, that is the only defensible thing about what he did.

The first and most crucial element is that it could be argued that Torres had no interest in just forcing Seabrook off of the puck. He had his target picked out even before the puck came behind the net, and he kept his eyes locked onto Brent the entire time he skated towards him. That by itself isn’t troubling, but the other components of the play are.

When Torres goes to hit Seabrook in the video, you can see that he deliberately aims high on the hit. Whether he was targeting Seabrook’s head or not can be debated at length, but the fact of the matter is that it certainly appeared that he was. When you have a player drilling a guy in the head from the blind side, that automatically ratchets up the deplorability quotient of the situation. Torres definitely wasn’t just going for the knockdown; he appeared to be going for the knock-out.

That last sentence applies to the final thing that has to be looked at: intent. Granted, you’re never sure about what a player’s intent was (although in some instances, such as the Matt Cooke hit on Fedor Tyutin and the Trevor Gillies hit on Cal Clutterbuck, you can infer it pretty easily), but on this hit, it definitely appeared that Torres was attempting to knock Seabrook into next week, and he was looking for a high hit to do it.

So now that the intent that Torres has on the hit has been discussed, a wrinkle or two does thicken the plot. TSN’s Bob McKenzie brought up an interesting point on Twitter Sunday night when he discussed the league’s stance on hits behind the net. He discussed how one NHL GM said that the league is more lenient on hits on unsuspecting players in that area of the ice, and that the league views those hits as more “North-South” instead of “East-West,” which would fall under the auspices of Rule 48. McKenzie also brought up that the distinction needed to be made between “a straight-on body check where shoulder also struck head” or a “head shot.”

As is usually the case with Mr. McKenzie, he definitely adds some much needed insight, but his argument is centered around the interpretation of a DVD issued last year by the league about hits in various areas of the ice. The main thing that is disagreeable about what he said was that he definitely did not take the intent of the hit into consideration, and that’s what makes it a more suspendable offense in this instance. It was pretty clear that Torres wasn’t just trying to knock Seabrook down; he was trying to injure him by leaping into his upper body, and likely was targeting Brent’s head.

With that in mind, the question becomes how long Torres should be suspended for. As a repeat offender, he certainly is going to get a long look for discipline in this situation, and if the league is serious about sending messages for these types of hits (that sure is a common refrain, isn’t it?), then they need to suspend Torres for at least the remainder of this series. That would mean a suspension of at least four games, and that seems to be appropriate considering the other discipline the league has handed out in these playoffs.

Jarret Stoll got a game for drilling a player from behind head-first into the boards, Bobby Ryan got two for stomping on another player’s foot with his skate, and now the repeat-offender Torres, fresh off a suspension for a similar play, should receive double Ryan’s ban at least.

Is the league finally getting to a point where they have to ban headshots outright? After all, players are still targeting the head even with the ban on blindside and lateral hits in place, so why not just disallow hits to the head altogether? Sure, you’re going to have the arguments that some headshots are inadvertent, but are there really any other options left at this point? Players aren’t stopping just because of Rule 48, so maybe the league needs to take even more drastic steps.

In this instance, the league probably won’t explore the option of completely banning headshots, but they also need to evaluate whether their on-ice officials properly did their jobs in only giving Torres a two-minute interference penalty. As was astutely observed by various reporters covering the game, if Seabrook had milked his injury and stayed on the ice longer, the odds that Torres would have received a game misconduct would have gone up quite a bit. As we’ve seen multiple times this season, including in the Brad Stuart incident among others, the league’s officials tie their punishments way too much to the severity of the injury sustained by the player involved, and that simply isn’t right.

To sum it up, this play is exactly the type of thing that the league should want to get out of the game. A player attempting to injure another player shouldn’t be tolerated, and if the NHL turns a blind eye to this and fails to suspend Torres, it will be one more black mark against a league that is quickly becoming known for their inability to properly protect their assets on the ice.

81 thoughts on “Hit Me With Your Best (Head) Shot: Should Raffi Torres Be Suspended?”