In today’s NHL, you don’t win the cup without at least three or four things: A true number one center, preferably someone who’s up for the Selke, a number one defenseman, and either world beating goaltending or a penalty kill that’s tops in at least the playoffs.  Of course depth at every position is usually a requirement as well, but the pieces mentioned above are the building blocks used to form a contender.

I would say that the combination of Matt Duchene and Nathan MacKinnon evens out the absence of a Selke nominee.  Goaltending might be an issue, but Semyon Varlamov has played exceptionally well in the past, well enough in fact that it wouldn’t be a stretch to see him steal a series.  Should he falter, however, the Avalanche have Calvin Pickard, one of the top-ranked goaltending prospects in the league, who’s already shown flashes of what he can do in the NHL, becoming a steadying presence in goal when Varlamov was showing signs of inconsistency.

That leaves a number one defenseman.  Erik Johnson was supposed to be just that when the Avalanche traded for him.  That has not been the case.  Tyson Barrie and Francois Beauchemin lead the team in Time-On-Ice, but the former could use some work consistently connecting with that first pass while the latter simply needs to be in a smaller role for his age.  So what are the possible solutions?

Current Prospects or the Draft

The Avalanche currently have two defensemen rated as top five prospects for their organization.  Nicolas Meloche is certainly an imposing option at 6’2, 200 pounds, but he needs to work on his footwork if he’s ever going to be able to take advantage of his stature, much less play top pairing minutes in the NHL.

Chris Bigras is a more intriguing option.  We’ve seen him play a focused, mature game in his time with the Avalanche this season.  I’ve mentioned previously how he won’t ‘wow’ you with offensive talent, but it isn’t hard to see him maturing into a top-four role in the near future.  He has good instincts and a very high hockey IQ that will certainly help the team once he gets a little more seasoning.

Having said all that, it’s way too early to tell what the future will hold for Bigras and the Avalanche.  While I truly hope that he ends up as good as he’s looked, it will certainly take some time for him to develop.

Then there’s always the draft, and this year is reporting solid, blue-chip prospects all the way to around the 20th pick.  But even if Colorado finds a way to trade up high enough to grab Jacob Chychrun, the chance that a prospect steps in and immediately and reshapes the defense is next to non-existent.

Most years, this would be a complete dud.  Teams tend to lock up their players for longer periods than they did before, sweetening the pot with no-movement or no-trade clauses.  It’s been (seemingly) great for the overall competition among the top teams, but it’s left days like July 1st a total dud.

This year is a bit different.  There are three very intriguing defensemen heading into free agency this year.  All three of them left-handed shots, making it easy to slot them in next to Barrie or Johnson.  Two of them have played as a number one defenseman at some point in their respective careers.  Like with most things, however, there are caveats with this.  All of them will be at least 30 next year and two of them have been reported to be trying to resign with their current teams.  Those two are Brian Campbell and Dan Hamhuis.  The other is Keith Yandle.

Hamhuis is likely not the answer anyway though he would be a significant upgrade.  They could use a top-four defender to keep the kids from being forced to play a significant role too early while keeping the dregs on the lower pairing or in the press box.

Now, Brian Campbell, if he could be persuaded, could ignite this team.  At 36, he’s not getting any younger, but he’s been a positive possession player even while playing for the generally ‘top heavy’ Panthers team.  What’s more, one of the few things that have remained constant between the Panther’s last trip to the playoff’s and this one is Campbell’s presence as arguably their number one defenseman.  He’s going to have to come down from $7.1 million cap hit he had on his previous contract anyway, so it might be worth it to kick the tires on him over the summer. 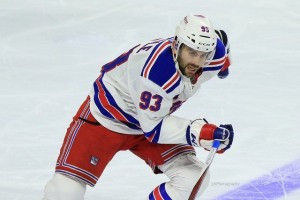 That brings us to Yandle.  His numbers throughout his career, including his advanced stats, are generally positive.  He’s a threat at five-on-five and can quarterback a powerplay.  As of this writing, Yandle is currently fifth in TOI per game for the Rangers, yet leads all of their defensemen in scoring, is fourth on the TEAM in overall scoring (as of April 1st), and has stronger possession stats then all four skaters in front of him; though, to be fair, he isn’t playing the toughest competition.

Take into account New York probably can’t afford him next year due to their own cap constraints, coupled with the fact his value may have taken a hit because of his usage, and the way the New York media has portrayed him, it start to seem not so unlikely he’d come at somewhat of a discount, considering what he brings to the table.

But for the sake of realism, all of these suggestions need to be taken with a grain of salt due to the fact that Avalanche owner, Stan Kroenke (who actually had to transfer the team over to a family trust in October), is notoriously cheap.  New contracts for MacKinnon and Barrie will likely not be. Unless they can get creative, don’t expect too big of a splash in the offseason.

I put this last because, quite frankly, I feel like it’s the least likely thing to happen.  Duchene and MacKinnon are quality centers, and as the Avalanche should know by now, you don’t want to lose those.  Gabriel Landeskog is the captain, and while he’d certainly fetch what the Avalanche are looking for, and possibly more, the problems his departure creates would be nearly catastrophic.  Sure, he’s had some penalty problems this year and there have been questions about effort, not just for him, but the team as a whole, with part of the blame being laid at his feet.  I realize the majority of Avalanche media and fans support Landeskog, but I feel this needs to be said: you don’t trade players of his caliber in their 20’s.  You just don’t.  He still has time to mature, any issues that were previously mentioned usually have a way of working themselves out as he gets older and figures it out.  Would you rather him do that in Colorado or in someone else’s sweater?

Other than that, there’s not much on the roster that wouldn’t take picks or prospects to sweeten any potential deals. Jarome Iginla’s value won’t improve until around next year’s trade deadline, and then only if he’s playing well. Even so, he’ll likely only fetch a mid-round pick or two, maybe mid-level prospect.

Erik Johnson is going to be making six million dollars next season.  As it stands, he currently has 11 goals and 26 points in 68 games, which isn’t terrible considering he’s missed a chunk of time.  But he’s also 11th on the team in Corsi and only just barely positive relative to his team.  If this pattern continues, eating some salary in an effort to turn him into prospects or picks would serve the purpose of freeing up cap space in the future, as well as possibly gaining a high pick or decent prospect.

This year’s free agency class might be the Avalanche’s best chance to grab a solid defenseman that can play a lot of minutes while mentoring the prospects coming in. To do that, though, some contracts would likely have to be cleared in order to loosen the purse strings for the team.  The team is projected to have a little over $21 million in cap space with fifteen players already signed for next year.

Though, when it comes to Kroenke, it probably won’t matter.

Jim has been a freelance writer for last 3 years and an Avalanche fan for last 15.