There are many roads leading to the NHL – even after you are drafted. One way is to go directly from the entry draft in the summer to a spot in the lineup in the fall. Extraordinary talents like Patrik Laine, Connor McDavid, and Auston Matthews, to name a few, have walked that path in recent years.

Another way is to remain in a less glamorous league, waiting for the opportunity to come – basically just trying to improve and educate oneself as a player before the window closes. These players perhaps need more experience to adapt to senior level hockey or simply haven’t been good enough for the big move.

Meanwhile in the Swedish Hockey League, the 2016-17 regular season is nearing its end. Since the start, a handful of players have emerged from that latter category, slowly earning their ticket to the NHL teams that still hold their rights.

In light of their individual development, with respect to their potential, I want to bring out three names in particular who I think have good chances to make the cut next season for their respective rosters. Note, however, that I have left out players that are not drafted or aren’t draft eligible yet. The same goes for players already having made their NHL debut. Otherwise, Minnesota Wild’s Joel Eriksson-Ek and Anaheim Ducks’ Jacob Larsson would be given choices.

Lindblom attempted to break into the Flyers’ lineup before the 2015-16 season but ended up in the AHL with the Lehigh Valley Phantoms. After eight games and seven points in the farm team, Lindblom returned home – a choice that was made on his own. In retrospect, that was the smartest thing he could do.

Since then, the 20-year-old Gävle native has grown to become one of the top producing players in the SHL. As I’m writing this, only two players are ahead of Lindblom in points this season. And even if we look beyond that, the winger has taken his game to another level. His skating, which has been declared an issue for him in the past, has improved vastly – making him an even bigger offensive threat now.

Although Lindblom hasn’t signed an entry-level contract with the Flyers, it’s obvious that the mindset of both Lindblom and the Flyers is that he should be an NHL player next season. In fact, it wasn’t impossible for him to make an appearance for the Flyers this season had he decided to stay in North America.

“Maybe in a perfect world we want him here, but if he doesn’t want to be here, is he going to be better off being where he wants to be for one more year with his mindset for developing,” Flyers general manager Ron Hextall said.

“He’s playing against men. It’s not like he’s going back to junior that maybe he’d outgrown. He was going to play against men and he wasn’t a top player last year in the SHL, so he comes this year and he’s taken his game clearly to the next level and he is a top player at that level. Now next year it’s time to come on over and see what he can do.” 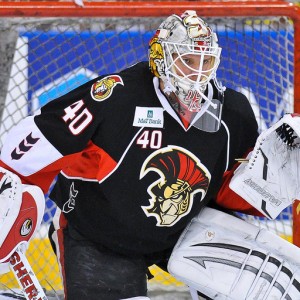 The rising development curve of this 6’5” Örebro native is best described as slow but steady. It’s been four full years since Högberg was drafted by the Senators, and since then he’s been marinating in Sweden, guarding the net for Linköpings HC. Judging from this season, however, he’s finally beginning to look ready.

Högberg has not only improved his individual numbers, making this his best SHL season of his career so far, but he has also learned from all the errors that have stacked up against him over the years. We have always known that he can be an outstanding goaltender at times, although inconsistent. That doesn’t seem to be the case anymore, at least not as much as before, which surely catches the attention of the Senators.

With Craig Anderson, Mike Condon and Andrew Hammond having shared the net for the Sens this season, will there be room for Högberg? Well, it looks like it.

“We have a plan for Marcus and the idea is that he will be playing in North America next season. We definitely see NHL potential in him, he’s a part of our future,” Ottawa Senators assistant general manager Randy Lee said earlier in February. “He’s big, but still got quick feet, and has shown more maturity and consistency in his game. He has really embraced the things we’ve said he needs to work on. We’re really happy with that, and how he has prepared himself.”

Most likely, however, Högberg will begin next season with Ottawa’s AHL affiliate Binghamton Senators to adapt to the different style of hockey and rink size. From there, it will be interesting to see if he can save his way to the NHL.

This is a long shot, I realize that. We know little about Holmström’s status as of now, and to expect him to travel the fast lane to the Red Wings lineup might be an unrealistic idea. Due to a serious knee injury, Holmström has barely touched the ice in the past year. And in his first home game following his return for Skellefteå in November, the big-sized center suffered a setback and got injured once again.

However, Holmström is no average player and I expect no average recovery.

After all, we’re talking about the player who made the history books in 2015, after setting a new record for most points scored by a junior player in the SHL playoffs. With 18 points in 15 games, he erased Daniel and Henrik Sedin (14 points each in the 1999-2000 SHL playoffs) from the top. If Holmström can return to be just half the player he was then, he has no reason to worry about his future.

In the meantime, the Red Wings seek a shift in generations (although the recent additions of experienced players like Frans Nielsen and Thomas Vanek partly suggest otherwise), and that’s where Holmström fits in perfectly for the 2017-18 season. That being said, it’s not unlikely that the 20-year-old, who signed a three-year entry-level contract with the Red Wings in 2015, decides to stay yet another year in Sweden to make up for the progress lost because of his injuries.

Either way, let’s genuinely hope that Holmström has better luck from here. In fact, he’s back and has made a couple of SHL appearances in February, which is good news for both Axel and the Red Wings.

Feel free to reach out to me on Twitter (@_David Carlsson) and let me know your viewpoint on these prospects, as well as your opinion on this article. Thanks for reading!

From NHL Pause to Playoffs: How to End the 2019-20 Regular Season