The New York Islanders entered into the 2015 NHL Draft with no first round picks. They walked out of the BB&T Center Friday night with two selections made in Rd. 1. New York traded top prospect, defenseman Griffin Reinhart (2012 4th overall selection), to the Edmonton Oilers for the 16th overall pick in the first round and the 33rd overall pick in the second round in this year’s draft. 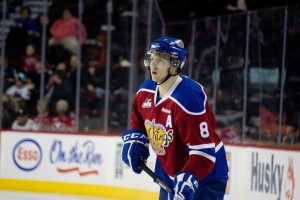 Depth on the Blue Line

Hockey fans want to know why the Islanders moved Reinhart. Was New York down on the top prospect? I don’t believe that was the reason. New York is flushed throughout the organization with defensemen. They already have locked up Johnny Boychuk, Nick Leddy and Travis Hamonic. Indications are New York is closing in on signing Thomas Hickey to a long-term extension, as well. In addition, New York is looking to add a veteran defenseman this offseason. This could happen by either trade or through free agency. Arthur Staple of New York Newsday reported Garth Snow has a strong interest in free-agent Christian Ehrhoff. Finally, the Islanders have two top defense prospects in Ryan Pulock and Scott Mayfield, who appear to be NHL ready. New York also has a number of solid secondary defense prospects developing in their system, as well.

But despite the great depth on defense that New York has in their organization, again according to Arthur Staple of New York Newsday, the Islanders would not have made this trade unless Barzal was available at No. 16.

Source says #Isles only made this deal when Barzal fell to 16. No chance they make it otherwise.

Barzal is a center who is a competitive two-way player with strong puck-possession skills. Many experts had Barzal going in the top 10 in this draft, including Hockeys Future. Here is their talent analysis on Barzal.

Barzal is definitely more of a playmaker than a goal scorer at this stage of his development, with his play-making skills being high-end. Also at an elite level is his skating as Barzal has quickness and acceleration as good as any player in the 2015 draft pool. Barzal has a decent frame but needs to fill it out to handle the rigors of the pro game. He is definitely a student of the game, and has a good on-ice hockey IQ. There is a lot to suggest that Barzal is a high-end prospect, but the results haven’t been quite as evident the past two seasons.

With their second pick, they acquired from Edmonton, New York traded up to No. 28 to take forward, Anthony Beauvillier. At the end of the day, the Islanders got deeper and acquired more talent in their organization. In addition to their depth on the blue line in their pipeline, New York has Michael Dal Colle, Josh Ho-Sang, Matthew Barzal and Anthony Beauvillier coming soon at the forward position, as well.