The Edmonton Oilers have acquired New York Rangers goaltender Cam Talbot and the Rangers 209th pick in exchange for the Oilers’ 57th, 79th, and 184th pick.

The New York Rangers have traded goaltender Cam Talbot and pick No. 209 to the Edmonton Oilers in exchange for picks No. 57, 79 and 184 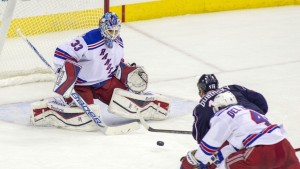 The Rangers were open about their desire to ship out Talbot for picks, particularly since GM Glen Sather has a propensity to trade away the team’s top draft picks at the trade deadline. However, the return is less than was rumored earlier in the week when teams were saying that offers had been made for two 2nd round picks in exchange for Talbot.

The Oilers are shoring up their issues and starting to build a roster that could finally turn the corner. Talbot posted a .926 all situation Sv% last season playing in 36 games, largely in relief of Henrik Lundqvist when he was injured late in the season.