On November 12, the Calgary Flames fell 4-1 to the New York Rangers on the back of a lackluster effort and slid to 5-10-1. The record would match last year’s start, tying the worst 15 game beginning to a season since 2000-01. For a team entering the season with playoff aspirations, the Flames were laying the proverbial egg. It doesn’t take a brilliant mind to conclude that a record like that is going to keep a team from any kind of meaningful games down the stretch.

Since then, however, the Flames have had somewhat of a resurgence, going 4-2, and creeping back to a .500 record. Despite the terrible start, do the Flames still stand a chance at a playoff appearance?

If you are not familiar with the current playoff format, the top three teams from each division will qualify for the Stanley Cup playoffs. The remaining teams in the conference combine together to fight it out for the last two wild-card spots. The way things stand now, the Flames are benefiting greatly from a weak division and conference. While Edmonton, San Jose, and Los Angeles 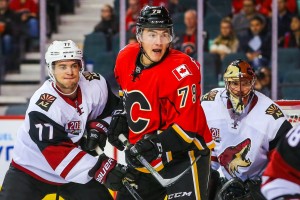 sit atop the Pacific, they are all placed behind  the other division leaders. The Canadiens are the cream of the crop with an NHL-leading 30 points, and the Blackhawks and Rangers are not far behind leading their divisions with 28 and 30 points respectively. The Pacific Division-leading Oilers are at the bottom of the divisional bests with 25 points to their name.

Breaking down the Pacific Division, the Oilers are an anomaly within themselves. The Oil came out of the gate firing on all cylinders, and have recently put together another mini-streak, winning their last three contests. Streak aside, cracks had shown when the Oilers took a step back winning only three of 10 in a sequence that spanned almost three weeks.

Next, Los Angeles stumbled out of the gate but have pulled things together recently. That being said, the Kings still have their concerns. Questions surround Peter Budaj’s longevity after the injury to Jonathan Quick, as one main area to keep an eye on. Finally, San Jose has been a little sluggish to start the season as well, leaving an opening for other teams in the Pacific to strike. Andrew Bet took a look at the Sharks‘ compete level as a result, and all three teams are still well within reach for the Flames.

In conjunction with that, the Western Conference is still up in the air. After the Blackhawks in the Central Division, there’s a slight dropoff to St. Louis at 25, and then even further to Minnesota who sneaks into a divisional birth at only 22 points. The two teams holding the wild card spot are split from both divisions.

The Anaheim Ducks hold the first wild card spot at 22 points from the Pacific and the Nashville Predators worked their way in from the Central with 21 points, only two ahead of the Flames. The Ducks are on shaky ground, as Felix Sicard recently noted 3 Troubling Stats for the Ducks. As far as catching Nashville goes, there are goaltending concerns that make them a target to overtake as well.

Looking in the Mirror

All of that being said, attempting to poke holes in other teams isn’t going to put the Flames in playoff contention. Despite Calgary showing dramatic improvement in their five on five play, and with goaltending being exponentially better, they too have their demons.The special teams, as Dary Hume explored, is still 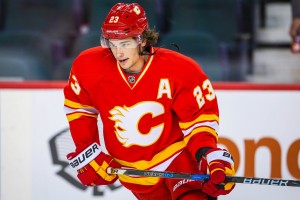 The special teams, as Darcy Hume explored, is still a significant area of concern. A dead last power play and second to last penalty kill are game breakers that the Flames need to improve on immediately. In addition to that, the Flames’ best players have significantly underperformed, leaving much to be desired. Sean Monahan is ninth on the team in points and looks lost. Mark Giordano hasn’t been himself, and even T.J. Brodie is last on the team with an abysmal -12. Hopefully, last night indicates a corner being turned special teams wise. The Flames went 1/3 on the power play and 4/4 on the penalty kill against the league’s best power play. If the top end players can fire things up in conjunction with improved special teams, there’s potential for

Hopefully, last night’s game indicates that the team is turning a corner in terms of special teams. The Flames went 1/3 on the power play and 4/4 on the penalty kill against the league’s best power play. If the top end players can fire things up in conjunction with improved special teams, there’s potential to gain some ground.

"We have to be way better on our special teams." – Mark Giordano

It seems ridiculous watching the standings this early on, however American Thanksgiving has been a date that many prognosticators have circled on their calendars over the past few years. The statistics have shown that if a team does not possess a playoff spot at this point in the season, odds are they won’t find themselves in a spot at the end of the year.

American Thanksgiving will have come and gone tonight with the Flames on the outside looking in, and every day that passes their chances dwindle significantly. At the quarter mark of the season, there’s no more time to waste. Optimistically, the Flames can put a run together if everything falls in line. The division and conference are as close as an outside team could hope for. There are signs of improvement, and as Hans Solo said, “never tell me the odds”.