At the beginning of last season, the Anaheim Ducks struggled to score goals, netting only 10 goals in the first 10 games. Corey Perry didn’t light the lamp until the 12th regular season game against the Florida Panthers. This season Perry got off to a better start with four goals in the first eight games. However, since then he hasn’t scored a goal in his last 12.

Perry has made a living in front and around the opponent’s net. He screens, camping out in front of the opposing goalie and sometimes makes plays behind the net. The majority of Perry’s scoring chances and goals come within 5-10 feet around the net. This season, he hasn’t been as effective around the net, but to his credit, he has 12 assists in his last 12 games even though he hasn’t scored a goal during that time.

Split Up Getzlaf and Perry? 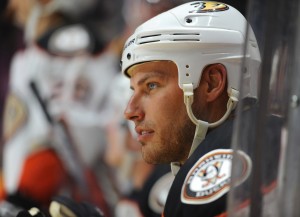 For the majority of this season, Perry has played with Ryan Getzlaf and Nick Ritchie on the top line. Getzlaf has been the setup man on the line, looking to pass (sometimes too often) to his linemates. With Perry’s recent play, the Ducks have two players on the same line making passes to create scoring chances for fellow linemates.

Randy Carlyle should consider splitting up Getzlaf and Perry since their play has been similar. Getzlaf leads the team with 15 assists and Perry is right behind him with 12. Perry and Ritchie have scored four times this season and Getzlaf has just scored once. They have combined for nine goals, the lowest total of the three scoring lines on Anaheim. The Ryan Kesler line has scored 19 goals and the Antoine Vermette line has contributed 11 goals.

Carlyle should change up the Getzlaf and Vermette lines. The head coach could put Ondrej Kase on Getzlaf’s line with Ritchie. Kase has played just four games and hasn’t scored a goal, but his best game came against the Islanders this week. In that contest, Kase beat Thomas Greiss twice but unfortunately hit the post on both occasions. However, he scored a great backhand goal in the shootout. Putting him with Getzlaf could be a good combination leading to scoring chances for Kase the rest of the season.

Carlyle could then put Perry on the Vermette line with Rakell. Vermette has been outstanding in the face-off circle winning 66.9% of his draws. He has also contributed offensively with four goals. Vermette and Perry could develop good chemistry. Rakell has played well with Vermette so far this season, though last game he was paired with Getzlaf and Perry on the top line. Rakell has scored six goals while paired with Vermette and one goal with Getzlaf and Perry against the Islanders.

One line that shouldn’t be adjusted is the Ryan Kesler line. The trio of Kesler, Andrew Cogliano, and Jakob Silfverberg have led the way in Anaheim with 19 goals. Kesler leads the team with eight goals and in all six games he has scored, Anaheim is a perfect 6-0-0. Since coming to Anaheim in 2014, the Ducks are an amazing 20-0-1 during the regular season at home when Kesler scores.

This line hasn’t just been getting it done offensively. The trio is regularly matched up against the league’s best forwards night in and night out. Recently, this line shut down Connor McDavid, holding him off the scoresheet in Anaheim’s 4-1 win over Edmonton. The three Anaheim forwards have a combined on-ice rating of +23 this season. The Kesler line has been getting it done at both ends of the rink this season.

If the Ducks can get all three scoring lines to produce goals with more consistency, then Anaheim could go on a run like last season. The Ducks dominated from the holiday break, rallying from last place in the Pacific to first for their fourth Pacific Division title in a row. They are off to a better start this season and a few tweaks to the forward lines could provide for even better Ducks hockey down the stretch.