After losing six consecutive games on the road, the Winnipeg Jets picked up back-to-back victories against tough divisional opponents on Dec. 3 and 4. But the journey to these victories was not easy.

“Definitely huge,” Jets forward Mathieu Perreault told the Winnipeg Sun. “You know, now we are a .500 team and we give ourselves a chance to get above and look ahead. If you lose those two games, you are in a pretty deep hole. We played these games really hard, we made sure these guys knew what were the stakes here in the room.”

The Jets had been outscored 23-8 in the six road games prior to these Ws, including a road trip in which they lost all five games.

“After the last road trip, we’re really happy with how this weekend went,” said Andrew Copp, who scored the game-winning goal against the Blackhawks.

What makes Winnipeg so ineffective on the road? Part of it is due to their tumultuous travel routine.

Life on the Road

The road has been unforgiving for the Jets since their return to Winnipeg in 2011. For the entirety of the 2011-12 season and the lockout-shortened 2013 season, the Jets played in the Southeast Division like their predecessors, the Atlanta Thrashers. This meant having to travel as far as Washington, D.C.; North Carolina; and Florida, just to visit division rivals.

To solve this the NHL implemented a league-wide realignment which saw the Jets move to the Western Conference while the Detroit Red Wings and Columbus Blue Jackets moved out east. Despite the move to the new-and-improved Central Division, the team was forced to make long journeys – and still are today.

“Our travel dictates our rest and recovery process, so we end up maybe not having the luxury of getting the amount of quality sleeps that a team like Washington might have,” said Jets fitness director Dr. Craig Slaunwhite in an article from SB Nation.

The Capitals are a good example of a light travel schedule. They have the advantage of playing in the Metropolitan Division; a division in which all its teams are in proximity. Geographically speaking, Washington’s farthest divisional opponent is Columbus, approximately 420 miles separate the two cities. Meanwhile, in the Jets’ case, their shortest trip would be to St. Paul to visit the Minnesota Wild, 460 miles away. 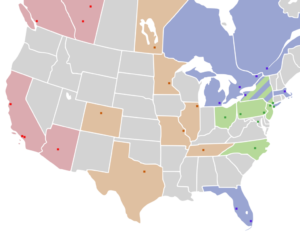 “[The Capitals] have the ability to have more traditional practices,” Dr. Slaunwhite continued. “Everything is a balance. We feel like, ‘yeah we need practices, we need guys to maintain their skill and chemistry,’ but at the end of the day we need them to be as fresh and as prepared as possible for the games.”

This map shows the location of each NHL team, and the color denotes what division they’re in. This makes it easy to visualize how far the Jets have to travel for every game. Though the Oilers, Flames, and Canucks — all colored in red for the Pacific Division — also seem isolated, they have it better off than teams like the Jets and the Avalanche. Teams in the Pacific are in clusters: one in western Canada and one in California/Arizona. Even when they’re traveling from one cluster to the other, so to speak, road trips are made that much easier because teams can play a few games within a short distance.

Jets head coach Paul Maurice on Tuesday, following a loss at home, confirmed that their recent travel schedule was a big reason they couldn’t keep the momentum going.

“We played six straight fantastic, full-on periods,” Maurice said, referring to the road wins against the Blues and Blackhawks. But he continued to say that “we were just struggling to find some legs” against the Red Wings on Tuesday.

How did the Jets find success on their most recent road trip?

In both of the games against the Blackhawks and the Blues, the Jets found success in their strong defense.

“That was the most tired I’ve ever been playing hockey,” goalie Connor Hellebuyck told the Winnipeg Sun following Sunday’s game in Chicago. Despite the Blackhawks registering only 13 shots through the first two periods, they had streaks of strong pressure, particularly when they were down in the third period.

Seven of the 25 shots Hellebuyck faced came in the final four minutes of the third period, including four during a late Blackhawks power play.

“The guys in front of me were doing everything,” Hellebuyck continued, referring to the Winnipeg D during that four-minute frenzy. “They’re battling twice as hard and especially in a back-to-back you could see that they really wanted it. They were battling extremely hard and when guys are laying out to block a shot on the PK with two minutes left you know they’ve really bought into the system and they really want it.”

The Jets will continue the search for their penicillin when they face the Oilers and Flames in back-to-back games on the road this weekend.

Emma Miller is a journalist-in-the-making with a passion for all things hockey. She is currently studying Journalism at Ithaca College, where she received the Rod Serling Communications Scholarship for excellence in the field of communications. Before her venture as a Winnipeg Jets contributor for THW, Emma completed several internships with Swimming World Magazine which allowed her to explore her love of on-the-fly sports journalism and live radio broadcasting. She is also proud to have been recognized by the Garden State Scholastic Press Association for Honorable Mention in Sports Writing across all high school journalists in the state of New Jersey. Above all else, Emma wants to convey her love for the sport of hockey through her writing and hopes to gain experience for a possible career in this field. You can follow Emma on Twitter at @emiller04 or shoot her an email at emiller8@ithaca.edu.