Nestled on the Lake of the Woods in far northwestern Ontario, Kenora has a rich history that also includes hockey. This small city has recently celebrated the spoils of the Los Angeles Kings’ Stanley Cup victories in 2012 and 2014, when hometown player, Mike Richards, brought the trophy back in the summertime. In fact, when Richards first brought the Stanley Cup back to Kenora in August 2012, he and the chalice both arrived by floatplane on the Lake of the Woods. But few realize that Kenora’s hockey success dates back much further. On this day in hockey history in 1907, the Kenora Thistles won the Stanley Cup.

In 1894, the Thistles Hockey Club was formed in Rat Portage. Prior to 1905, Kenora was actually known as Rat Portage and at the time, the small town was best known for its abundance of natural resources such as lumbering, fishing, and gold mining. However, by 1907 Kenora would be immortalized on one of the most iconic and treasured trophies in all of sports.

Although the National Hockey League (NHL) was not formed until November 1917, the Stanley Cup had been awarded to amateur hockey teams since 1894. At this time, there was no single league across Canada so the winning clubs from various amateur hockey associations competed for the honour to hoist the Cup. This was known as the Challenge era because the current holder of the cup could be challenged each year, sometimes more than once, by another amateur club. This format continued until 1914 when it was decided that the Stanley Cup would be awarded to the winner of a series, at the end of the season, between the champions of the National Hockey Association and the Pacific Hockey Association, forerunners to the modern NHL.

At the end of the 1905-1906 season, the Kenora Thistles were the champions of the Manitoba Hockey League, making them eligible to issue a challenge for the Stanley Cup. Unfortunately, their season ended too late and Kenora would have to wait a year before it could throw down the gauntlet. When the challenge was finally issued, the Thistles were to square off against the Montreal Wanderers of the Eastern Canadian Amateur Hockey League; the defending champions of the most recent Stanley Cup.

The best of a three game series began in Montreal on 17 January 1907. Before a crowd of nearly 8,000, the Thistles downed the Wanderers 4-2. Four days later on 21 January (108 years ago today), the series resumed, giving Kenora the opportunity to clinch Lord Stanley’s trophy. The second game had no shortage of excitement. By the time the game was only half over, the Thistles were up 5-2, but the Wanderers were not ready to concede. Even after Kenora made it 6-2, Montreal refused to quit and rallied back, tying the game up at 6-6 with two minutes remaining. However, Kenora responded by scoring two quick goals, and securing the Stanley Cup with an 8-6 victory. There would be no need for a third game, the Thistles were returning home to the Lake of the Woods with Lord Stanley’s chalice in tow. 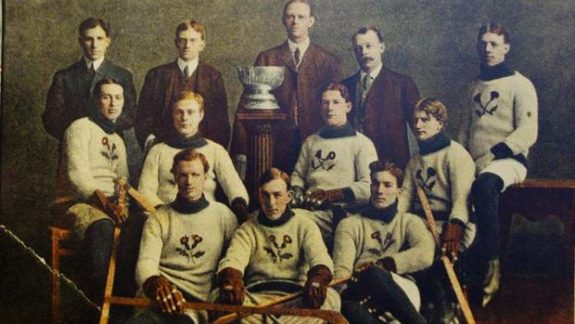 When the Thistles won the Stanley Cup in 1907, the town’s population was between 5,000 and 6,000, giving Kenora the title of the smallest town to ever win the Stanley Cup, a distinction it still holds today.

Art Ross was a Thistle 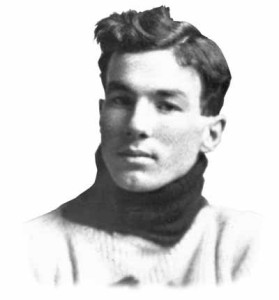 Kenora’s team included the likes of Art Ross, whom was loaned to the team for the Stanley Cup Challenge in 1907. At the time, Ross was playing for the Brandon Wheat Cities, also part of the Manitoba Hockey League. After helping the Thistles defeat the Wanderers, Ross’s services were acquired by Wanderers the following season. As part of Montreal, Ross won his second Stanley Cup the next year. After retiring from the game as a player, Ross served as a bench boss for eighteen years, capturing another Cup as coach of the Boston Bruins in 1939. Ross was inducted into the Hockey Hall of Fame in 1949 and is also immortalized on the eponymous Art Ross Trophy, which is presented each year to the player with the most regular season points.