On Sunday, the Los Angeles Kings have placed forward Mike Richards on unconditional waivers with the intention of buying him out, according to James Mirtle.

Richards was long expected to be a buyout candidate, particularly after the Kings sent him and his $5.75 million cap hit to the AHL this season after he passed unclaimed through waivers.

They will be losing over $4 million in cap space in two consecutive seasons for a player who hasn’t player for the team in three-four years. It’s hard not to see their current situation as a major misstep for Dean Lombardi who chose not to use a compliance buyout on Richards. No matter how you felt about the guy, it was clear that you’d hate that cap hit six years down the road. A compliance buyout would have saved the team a lot of trouble.

A few of you have asked if PHI is liable for cap recapture under Richards buyout. Answer is no, because he was traded prior to lockout.

Last season Richards had five goals and 11 assists through 53 games in the NHL, while playing very few minutes for most of the season. His P/60 of 1.2 was the lowest of his career. His average of 13.3 minutes per game as also a low point of his career.

Richards is only 30 and with some good salary coming in over the next ten years from the Kings, another team may be able to get him on a deal. The Kings couldn’t find a trade partner last year because even if the Kings retained the maximum 50% of his salary, he was making too much. If a team is able to bring in Richards on a more reasonable cap hit following a buyout, he ought to be able to find a job pretty easily.

But, what’s working against him is that he’s never been a particularly excellent defensive forward. With his offensive production trailing off, it’s hard to see what exactly he’ll be contributing three years down the road. He had a score-adjusted CF%Rel of -4.1% last year and -3%, -3.5%, and -6.9% in the three years preceding that. It’s not a pretty picture if he’s not able to put up 20 goals.

Here are a couple more looks at Richards’ impact. 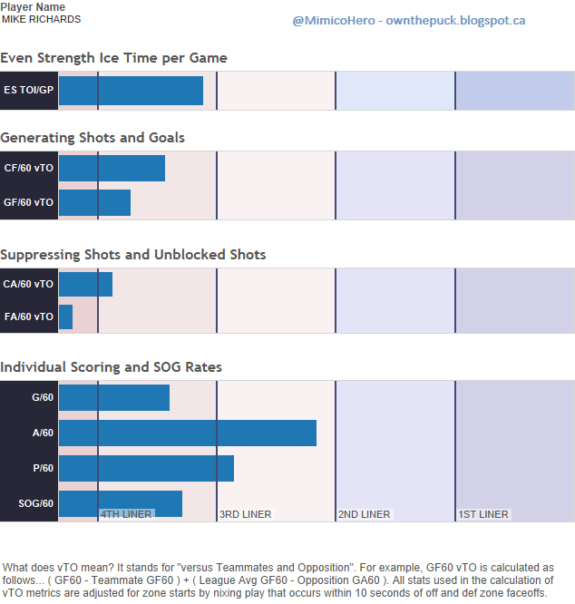 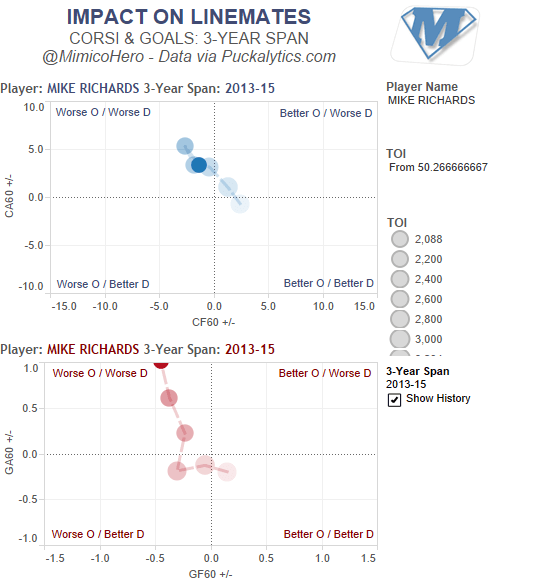 RELATED: A New Look for the Kings’ Top Six