It happens every year. Voters vote for the Norris Trophy to honor the NHL’s top defenseman. And invariably, it goes to a defenseman who scores a ton of points on the power play (PP). The award for best defenseman is largely based on performance during times when he doesn’t need to play defense.

Every year, there are those that bemoan this process. In a recent article, my THW colleague Mitch Michals wrote about his candidates for the Norris. In his article, he included 13 different defensemen. 11 of the 13 were in the top 20 in power play scoring. He also bemoaned the lack of defensive consideration involved in the voting process.

For starters, I looked at two metrics to create a dataset. I took the top 30 defensemen in non-PP points and the top 30 in plus-minus. I combined two groups and the resulting data set included 49 players. No doubt the Norris winner is in this group. Prominent names include PK Subban, Shea Weber, Brent Burns and Erik Karlsson. This graphic, without the player names, is below (a complete list of all 49 players is the notes section). In the graphic, better is further right and further up. It is that corner which is most interesting. 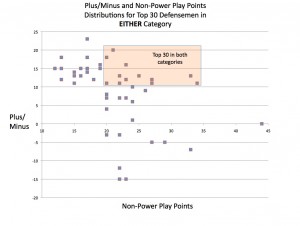 The top 30 defensemen in EITHER non-power play scoring OR plus-minus. 49 players are in one category or the other. Twelve are in both categories, indicated by the orange box (games though February 29, 2016).

Next, I culled the dataset to players who were in both categories; players in the top 30 in both plus-minus and in non-PP scoring. Only 12 players remained from the original group. That box is highlighted on the above graphic. None of the prominent names I mentioned in the prior paragraph made this cut. In the graphic below those 12 players are identified. It has a number of the usual suspects, but also several unexpected players show up.

In the final distillation, I highlighted players who had more face-offs in the defensive zone than in the offensive zone. Those names are in orange italics. While the zone start statistic is indicative of tougher positional starts, it also suggests something else. Coaches put their better defensive players out in tougher situations. The players who get more defensive zone starts are typically the ones coaches rely on for handling the tougher matchups. The five players highlighted are the players coaches trust against top-tier forward lines. 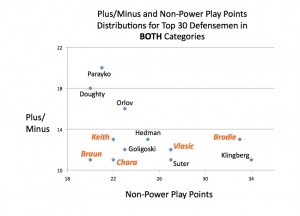 The 12 defensemen who are in the top 30 in BOTH non-power play scoring AND plus-minus (games through February 29, 2016)

That Zdeno Chara and Duncan Keith are in this group probably surprises no one. That Marc-Edouard Vlasic and TJ Brodie are the top scorers in the group is surprising. The fifth member of the club is Vlasic’s partner, Justin Braun. Of the five highlighted, only Vlasic and his partner Braun take less than 25% of their face-offs in their offensive zone. 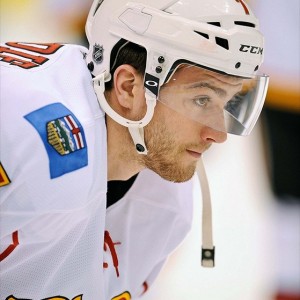 Also of note, the five highlighted defensemen all average over 2:00 minutes per game of penalty kill time. Of the other seven members of the group on the second graphic, only two, Drew Doughty and Alex Goligoski, are also above that amount. This just furthers the argument that the highlighted players are the players trusted to play defense.

If people are going to be serious about the Norris being for something other than power play prowess, this sort of analysis deserves to be part of the consideration. Vlasic fares very well in this approach.

Also faring well is T.J. Brodie. Brodie has been nothing short of remarkable. He is second on the Flames entire roster in non-PP scoring. His plus-13 leads the team — only three other mainstream teammates are positive for the year. Brodie has multiple strikes working against him. He missed the first nine games of the year, meaning his numbers will be a little bit down from where they could be. He is playing for a struggling team, meaning he will not have the visibility other players get who play for playoff contending teams. He does not have big power play point numbers, which are a major part of Norris candidates overall scoring. And he does not have a history of being a top candidate. None of these strikes should matter. In practice, they will all matter. 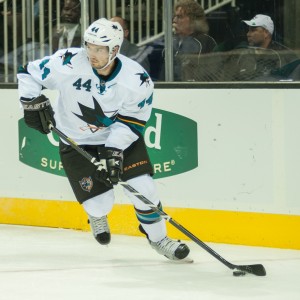 As a Sharks writer, I am more familiar with Vlasic than Brodie, so I’ll make the case for him here.

While history should be irrelevant to an annual award, we all know it isn’t. So I’ll add a few historical notes on Vlasic’s behalf. It is pretty much a given that Vlasic’s defensive game is among the best in hockey. In any discussion of the best defensive defensemen in hockey, Vlasic’s name comes up. Vlasic got rave reviews as a member of Team Canada’s romp to the gold in Sochi. It shocked no one that he was selected to be on Team Canada for the World Cup tournament.

Vlasic was drafted in 2005, the only member of his draft class with a better plus-minus is Sidney Crosby (and its close).

Vlasic was injured a few minutes into Game 5 versus the Los Angeles Kings in the 2013-14 Stanley Cup playoffs. He missed the rest of the series during the infamous reverse sweep to the Kings. With Vlasic playing, the Sharks were 3-1. With Vlasic out of the line-up the Sharks lost three straight and the series. This led to many describing Vlasic as the Sharks most irreplaceable player.

That irreplaceable ‘factor’ came up again this season. Vlasic missed three games in early December and the Sharks lost all three. In the game Vlasic was hurt against Anaheim, he missed the third period. The Sharks had outshot the Ducks 21-16 through two periods. Without Vlasic, the tables turned. The Sharks spent pretty much the entire third period hemmed in their own zone, were outshot 10-2, and lost on a goal scored in that period. The old saying ‘you don’t know what you’ve lost until its gone’ applies. It is Vlasic’s absence that clarifies what his presence means. When he is not out there, the entire team takes a big step back. Vlasic is not just extremely good, he is also extremely valuable.

The argument for Vlasic is simple enough. His scoring shows he among the better offensive defensemen in the league at even strength. His plus-minus shows he is among the best in the league in tilting the ice favorably for his team. He zone starts shows that he faces tougher competition than most of the top players. And while his absences from the lineup have been relatively few, the team’s record suffers significantly without Vlasic in the lineup.

To the astute observer, none of this comes as a surprise. Over the course of his career, Vlasic has been quiet, yet extremely effective. But stick lifts, solid positional play, smart zone defensive zone exits and clean offensive zone entries don’t make highlight reels. It is hard for Vlasic to find the spotlight, especially with the NHL’s most interesting player, Brent Burns, on the same team. Burns is an offensive tour de force, yet the Sharks have scored more goals with Vlasic on the ice during 5-on-5 play than with Burns on the ice.

I am under no illusion about the Norris Trophy and how the vote will go down this year. As in previous years, I fully expect the top vote recipients to be the usual suspects: players that have placed highly among the overall scoring leaders in significant part because of their power play scoring. If some voters decide to take a longer look, they will find interesting and very deserving candidates outside of the usual suspects.

Many of the statistics used in this article came from the website http://stats.hockeyanalysis.com/.

In researching this article, I also checked into new Sharks defenseman Roman Polak’s penalty kill numbers. Polak is sixth in the league in penalty kill time-on-ice among defensemen. More impressively, of the top 50 defensemen in penalty killing ice time, Polak has the second best GA60 (goals against per 60 minutes) at 4.80. Only David Savard of Columbus (4.66) is better. The Blues Jay Bouwmeester is the only other player in the group of 50 with a PK GA60 under 5.00.