The blockbuster trade between Boston and Dallas involved Rich Peverly, Tyler Seguin, Loui Eriksson, and some prospects. This post is one fan’s tribute to one of those prospects.

The first two seasons for the Texas Stars had established this team as defense-first. Scorers got it done by grinding away and getting the dirty goals. Aaron Gagnon’s 27 goals held the top spot in the books, but with all due respect, one might be pressed to remember too many of them.

Everybody likes to score goals. Matt Fraser loves it.

He needed just ten minutes in a Stars uniform to score his first professional goal. It was the first of his league-leading 37 in 2011-2012, a bright spot in an otherwise grim season. During one 15 game stretch, the 6’2″ 207 winger from Red Deer, Alberta scored 11-7-18 points, failing to register a point in just one of those games.

During his two seasons in Texas, Fraser’s 70 goals are the most among all AHL players in that span. They included:

One of those 2-goal games should have been a 3-goal game.  In overtime against Oklahoma City, Fraser cranked a slap shot past goalie Niko Hovinen. The photo below shows the puck over the line. But it also shows Fraser looking behind him. Why? 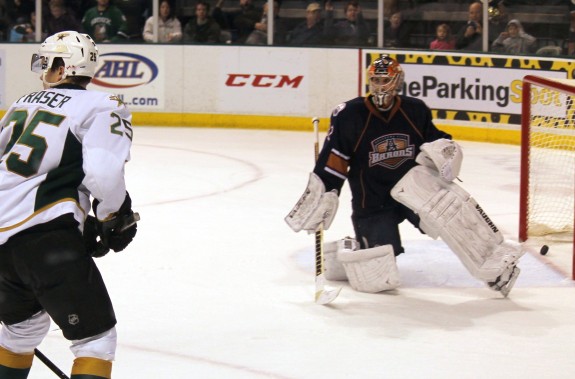 Because the moment he took the shot, way behind the play, Stars defenseman Jace Coyle took a dumb slashing penalty. No goal. Not only would it have been Fraser’s first professional hat trick, it would have been his first overtime goal.

While talk of Fraser’s contributions tend to center around his phenomenal world-class shot, which is as heavy as it is accurate, he is a more well-rounded player and person than that.

For instance, some Texas fans may bluster at the suggestion that Fraser plays with a nasty edge, but he does, subtle though it may be. I remember one woman telling me about Matt’s visit to her child’s school and how, throughout, Fraser displayed “literally the best manners of anyone I’ve ever met.”

That’s fine. That has nothing to do with his game. Just one example among many came this past March in a game against rival San Antonio. Thanks to a pair of goals by Fraser, the Stars had crawled back from a 3-1 deficit to tie the game at 3. Then late in the third, Fraser clobbered former Star Greg Rallo with a thundering crosscheck that went unseen by the referee.

And I would be remiss to omit mention of Fraser’s 2009 WHL Doug Wickenheiser Humanitarian of the Year award. It would be easy to say that he won the award for raising money to help in the fight against breast cancer but this would be doing a great disservice to what Fraser actually accomplished, and how it speaks to who he is as a person.

The dominant concern in oncology is whether a patient’s cancer has metastasized (disseminated) to other parts of the body, beyond the location of the primary tumor. Metastasis makes treatment exponentially more difficult and worsens outcomes considerably. In breast cancer staging, metastasis is determined according to the principle that, if the first lymph node that drains lymphatic fluid from a breast tumor contains cancer cells, then all the nodes in the region do.

Prior to 1992, surgeons conducted this staging by using an invasive surgical technique known as axillary lymph node dissection (the axillary lymph nodes are found under the arm). This procedure has its shortcomings, namely the high rate of post-op complications like lymphedema in which the nodes don’t drain properly, leading to a host of other problems.

In 1992, researchers developed a technique called sentinel lymph node biopsy. Minimally invasive and with a substantially lower rate of complications, this technique eventually became the standard of care for breast cancer patients with small tumors.

The procedure involves injecting a radiolabeled dye in order to find the sentinel node. A gamma camera is used prior to the procedure to visualize the node; but during the procedure, a hand-held gamma probe is required to actually detect the node.

Fraser, then with the Kootenay Ice, had seen his grandmother, his mother, and most recently, his billet mother, endure a cancer diagnosis. On his own initiative, he launched a program with the aim of contributing $5,000 towards the purchase of a $54,000 gamma probe so that patients would not have to make that seven hour drive. Ultimately, the program raised over $14,000 and, with the help of other organizations, the hospital was able to buy the device.

We can all be appreciative of anything, in any situation, that spares us from having to make a seven hour drive. But anyone who has had cancer or cared for someone with cancer has a much greater appreciation for this very specific contribution, because their lives are utterly dominated by exhausting hospital and clinic trips, one after the other.

It’s one thing to raise money for cancer research, money that goes into a general charity fund and gets allocated according to the decisions of administrators. It’s quite another to identify a highly specific need for a specific subset of patients and to focus your efforts on meeting that need.

I’m also saying that on account of all those attributes, Matt Fraser will be missed here in Austin. We wish him the best.