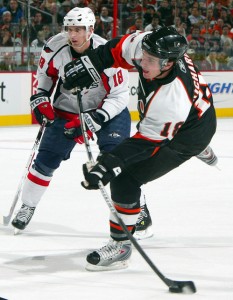 Prior to the start of the 2008-09 season, the Philadelphia Flyers made the decision to let their current captain, Jason Smith, leave via free agency as he signed a contract with the Ottawa Senators.  A decision needed to be made as to who the next captain of the team would be.  Some may feel the captaincy is an overrated position, however, this is not the case with the Philadelphia Flyers organization and their fans.

With arguably one of the greatest captains in the history of the NHL, Bobby Clarke, leading them to two Stanley Cup championships in the mid 70s, and other great captains such as Bill Barber, Dave Poulin and Ron Sutter, it has always been seen as an honor to be named captain of the Broad Street Bullies.  It would not be a tough decision to choose the next captain, after all, they knew Mike Richards was a future captain when he was drafted 24th overall in the 2003 NHL Entry Draft.  On September 17, 2008, Richards was named the 17th captain in Flyers history.  After being handsomely awarded for his dedication to the team with a 12-year $69 million dollar contract in mid-December, 2007, he will most likely be the captain for a long time.

Richards was born February 11, 1985, in Kenora, Ontario and began playing hockey at 5 years old at Kenora’s Evergreen Community Club.  The Club was run by Richards’ family along with some help from a friend’s family.  Mike’s brothers Matt and Mark and his father would care for the ice while his mother Irene would work the concession stand.  A cousin, Jeff Richards, also would play at the Community Club and would go on to play for the Sault Ste. Marie Greyhounds of the OHL.

Playing on an outdoor rink in Ontario brought with it a wide range of players from ages 5 up to 25.  Richards would usually give up several years and size to most of the players on the ice but would play regardless, and would never be deterred by bigger, better competition.  Mike’s mother Irene said, “Even as a 10-year-old, he played with anybody, it didn’t matter who it was.”  It was on this outdoor rink, while going out and having fun, that Richards really developed his skills and the competitive desire as a hockey player.

As early as the peewee division, Richard’s coach, Barry Reynard was touting him as a future star telling then-Kitchener Rangers GM Jamie McDonald about him.  McDonald would eventually go see Richards play.  Following his final year of minor-junior in which Richards scored 76 goals and 149 points in 85 games, McDonald would draft him 4th overall in the 2001 Ontario Hockey League Draft.

Richards had a solid first season in 2001-2002 with Kitchener finishing with 20 goals and 58 points.  The following season is when he would really make a name for himself.   Kitchener was a dominant team that year and captured the Memorial Cup Championship. Richards led the team in scoring during the regular season with 37 goals and 87 points, also posting a +35.  He would continue his pace in the playoffs with 27 points in 21 games.  That summer, the Philadelphia Flyers selected him in the NHL Draft.

Mike Richards returned to the Rangers for two more seasons. In his last season with Kitchener, 2004–05, the team would go on another Memorial Cup run.  Richard would play huge with a remarkable 28-point performance in just 15 playoff games.  Unfortunately, the Rangers were eliminated by the London Knights in the OHL semi-finals.   As soon as Kitchener was eliminated, the Flyers assigned Richards to the Philadelphia Phantoms their American Hockey League (AHL) affiliate, along with fellow 2003 draft pick Jeff Carter, for their playoff run. Scoring 15 points in 14 games, Richards became a key part of the Phantoms’ 2005 Calder Cup championship.

Richards also made a name for himself in international play with Team Canada in the 2004 and 2005 World Junior Championships, and in 2006 for the senior team in the World Championships.  In 2004, the team would come up just short losing to the United States in the Gold Medal game, settling for the silver.  Richards would score 5 points in the 6 games.  The following year, Richards would be named captain of a World Junior Dream Team that included phenom Sidney Crosby, fellow Flyers draft pick Jeff Carter, Ryan Getzlaf, Dion Phaneuf and tournament MVP Patrice Bergeron among many other great players.  He would again score 5 points in 6 games, leading the team to its first Gold Medal since 1997.  Canada would not win a medal in the 2006 World Championships.

Richards made his NHL debut with the Flyers the following season, 2005-2006 and scored a goal in his first game on October 5, 2005, against the New York Rangers.  Later in the season, he scored his first career NHL hat trick, which included two shorthanded goals, against the New York Islanders on February 8, 2006.  Flyers coach at the time, Ken Hitchcock, would put Richards in positions to succeed that year.  Richards centered both the 3rd and 4th lines, and also played a shut-down role with Michal Handzus on his wing.  As a rookie, Richards would see a lot of time killing penalties and also got some time playing the point on the powerplay, something that would become a staple of his game in his 3rd season.  Richards finished the season with a respectable 11 goals and 34 points for a player that played mostly in the bottom 6.

Richards second season would be a disaster.  Richards was kept to 32 points in 50 games due to abdominal surgery and it would be the team’s worst season in franchise history.  However, Richards would finish the season very strong, scoring 18 points in the final 19 games, showing offensive potential that would be realized in the following season.

When drafted with Jeff Carter in 2003, Carter was looked at as the one with the physical talent and huge offensive potential while Richards was always looked at as the player that succeeded based on his effort and determination.  Not blessed with blinding speed or elite skill in any one specific area, with the exception of maybe passing, it was thought that he would top out as a 2nd/3rd line center that would be an elite defensive force, special steams player and a great leader.  Boy were “they” wrong!

Richards emerged as a star with the Flyers in 2007–08 and topped the team in scoring with 28 goals and 75 points. The organization recognized his development as a leader on the team and Richards was named one of the Flyers’ alternate captains at the beginning of the season.   Shortly after signing his 12-year, $69 million extension in December, Richards was selected to represent the Eastern Conference at the 2008 NHL All-Star Game in Atlanta, his first of hopefully many.

The Flyers entered the 2008 Stanley Cup Playoffs against the third-seeded Washington Capitals.  On the back of a strong golatending performance by Martin Biron, the Flyers defeated the Capitals in seven games and then upset the Montreal Canadians in 5 games before falling to the Pittsburgh Penguins in the Eastern Conference Finals.  Richards finished the 2008 playoff run with 14 points in 17 games.

For the 2008-09 season, his first as captain, Richards would set new personal career highs with 30 goals and 80 points.  He would also continue to play the point on the first powerplay unit, score 7 shorthanded goals (including a record 3rd while shorthanded by two men), drop his gloves when needed and continued to develop into a great leader on and off the ice.  Unfortunately, the Flyers would be eliminated by the Penguins in the first round of the playoffs.  After elimination, it became known that Richards played through the playoff series with shoulder injuries, requiring surgery once the team was eliminated.   The fact that he played through shoulder injuries, while still throwing his weight around consistently was a surprise to no one.

A player who has been a captain and a winner wherever he has played, from peewee hockey to minor junior, major junior, international competition and minor pro hockey, the Flyers are hoping that Richards will be the one to lead the organization to their first Stanley Cup Championship in over 30 years.