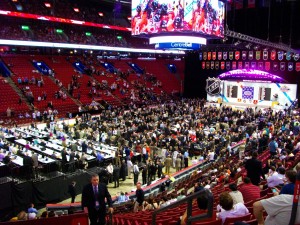 When I found out that the 2009 NHL Entry Draft was going to be in Montreal, I was dedicated to attend knowing that it would be real opportunity to be a part of something special: a big time event in the most important city affiliated with the sport of hockey and the National Hockey League.

I’ll admit though, that I was a bit skeptical about what the NHL Entry draft had in store for the average, everyday hockey fan. I was hoping in the back of my mind that it wasn’t going to be some glorified press event with little attention focused on the people that really make the sport what it is: the fans.

So, at 12:30am on Friday morning, I hopped in my tin can and trekked it north 12 hours to Quebec. The fun began the moment I arrived and didn’t stop until I got into my car to leave. 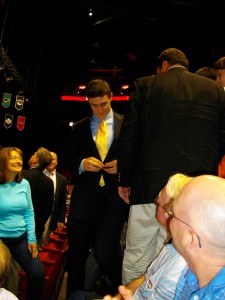 Friday’s Recap:
-I met Georges Laraque and watched him play outdoor hockey with kids on a makeshift rink just outside the arena.
-I watched prospects and coaches outside their hotels and the Bell Centre bantering and taking pictures with fans.
-I met John Moore in the streets and told him I look forward to having him in Buffalo (swing and a miss).
-I was able to meet up with Bruce Hollingdrake at the draft and shared some beers and stories with great new friend.
-I met some nice bloggers who let me hang out with them for the duration of the trip.
-I sat 10 rows from the floor for the Entry Draft and was sitting amongst players being drafted.
-I met Frank Musil and Scotty Bowman on my way back to the hotel.

Saturday’s Recap
-I woke up early and had breakfast with friends that were attending the Draft as a part of the NHL Tweetup.
-I played floor hockey with fellow Twitterers including Eklund from Hockey Buzz in an epic battle of Canada vs. the United States.
-I sat in front of Brian Burke as he thanked the city of Montreal and their fans for the hospitality (hilarious) before making the Leafs’ last pick.
-I took part in the NHL Tweet up for the 2009 Entry Draft and met some really great people.
-I had dinner with some great guys over at The Lighthouse and saw @dani3boyz with the Stanley Cup (which was right outside our restaurant!)

What made this experience all the more better was the city of Montreal and the people that live there. There is so much history to the city; so much beautiful architecture and cultural attractions that make Montreal a special place for someone who had never been. Combing hockey and Montreal was the perfect pairing.

Overall, the experience from the draft was one I will take with me for the rest of my life. The people I met and the interactions I had are experiences I would never trade in. If you ever have the opportunity to explore an Entry Draft in the future, I highly suggest it. Get locked into Twitter, look into a Tweetup, hook up with some fans and make the commitment. You won’t regret it. 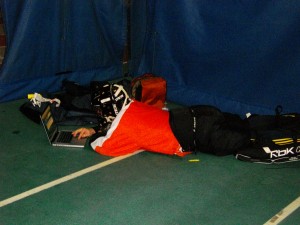