Monte Carlo algorithms are one of my favourite methods for analyzing hockey. I’ve used them previously for my work on this site when we analyze Ondrej Pavelec. A Monte Carlo simulation is explained by Wikipedia as “broad class of computational algorithms that rely on repeated random sampling to obtain numerical results; typically one runs simulations many times over in order to obtain the distribution of an unknown probabilistic entity”. Translating that to English, this means we can take the results of the quarter season for each team and try and predict how the team will look in the standings at the end of the year.

My thesis work found that in the National Hockey League random chance plays a large role within individual games for a vast number of reasons including parity, introduced with the salary cap, and the low number of events. As a result the better team is guaranteed to win only 24% of the games while the remaining 76% are a coin flip. We can use the Monte Carlo to simulate the remainder of the schedule based on these rules and determine the probability each team will finish within the rankings of their division.

For our Monte Carlo method we run it 10,000 times, a number that is based on previous experiment. To determine which teams are better than others we use their Score-Adjusted Corsi, which can be found currently on PuckOn.net.   As 25% of NHL games go to overtime we also included this in our simulation so that the simulated losing team would still earn an extra point.

It should be noted that all of these predictions are based on the teams as they are today. Massive injuries and trades can change the layout of the land that can have major effects on the possession abilities of these teams. A good example of this was in 2012 when the LA Kings traded for Jeff Carter vastly increasing their Score-Adjusted Corsi by over 7%. This is just a simple monte carlo but it does a good job capturing a large portion of what we know about the NHL today.

Today we will look at the results of the Pacific Division. 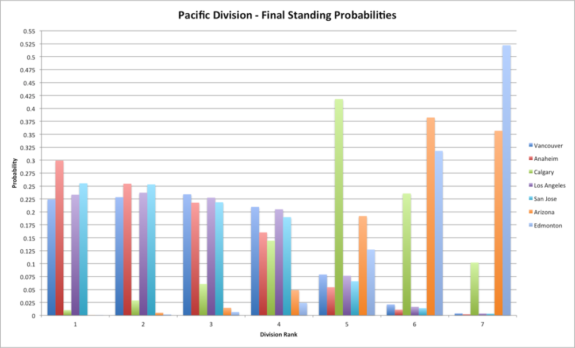 (I apologize to those who are colour blind; I have yet to find a colour pallet in Excel that works for all)

The Vancouver Canucks are currently sitting in first in the Pacific Division but their Score-Adjusted Corsi has them sitting at 16th with 50.3% and a slightly lucky PDO of 100.58%. Given that there are a number of division rivals who are better than them in possession with an unlucky PDO, it is not surprising that they are a team likely to fall. They shouldn’t fall out of a playoff picture but it is still within the realm of possibility. The most likely solution is to see Vancouver finish in third.

The Anaheim Ducks are currently sitting in second place in the division with 33 points in 25 games. Their Score-Adjusted Fenwick has the team sitting at 14th place with 50.9%. Anaheim has been quite unlucky given their large number of injuries combined with a below average PDO. Their luck should turn around and as they continue their strong play with the Ducks most likely looking at the division title.

Calgary has had a much better start to their season than anyone could have predicted. The Flames continue to fight regression as they are currently sitting at 3rd place in the division with 32 points in 25 games along with a 43.5% Score-Adjusted Corsi, good for 29th in the league. With a 102.51% PDO, they are the third “luckiest” team it’s no surprise to see them so high. It’s most likely that Calgary will drop to 5th and not make the playoffs given the strong play of the Central division with a high probability of capturing both wild card positions.

Los Angeles Kings are another surprise to this season as people were expecting them to continue their powerhouse domination. Instead they are sitting at fourth in the Pacific with 29 points in 24 games and a mere 51.5% Score-Adjusted Corsi, good for 13th in the league. The Kings are not being affected by luck as they are posting a 101.67% PDO but it seems the Kings will continue to stay in fourth and given how their wild-card counterparts do in the Central, could possibly be facing missing the playoffs.

San Jose Sharks are sitting much lower than expected, to start the season, thanks to a low PDO currently at 98.87. The Sharks have 26 points in 25 games and in their possession game they are the league’s 8th best team at 53.2%. It should be expected to see the Sharks climb up the standing most likely finishing in 2nd place in the Pacific.

Arizona Coyotes have performed worse compared to many people’s expectation with many pundits expecting them to be competing for a wildcard spot. Rather the Coyotes are in 6th place with 21 points in 24 games and are ranked 24th in Score-Adjusted Corsi at 47.3%. It is likely the Coyotes will continue to sit in 6th place for the year.

Very few people, outside of Edmonton, are surprised to see the Oilers dead last in the playoff race, but are quite competitive in the McDavid sweepstakes. The Oilers are second last in the league with 16 points in 24 games and are posting possession numbers of 49.1%, good for 21st in the league. It is the PDO of the Oilers, currently at 96.53% that is causing them to be performing as badly as they have been. Regardless it would be quite difficult for Edmonton to climb higher than 7th within the Pacific.

The likely final standings within the Pacific Division should be as follows: