As the general manager of the Montreal Canadiens, Marc Bergevin is notorious for making unpopular trades. However, what he has managed to get right are the small depth acquisitions that fall under the radar. He grabbed relatively unknown Paul Byron off waivers a few years ago and he has turned into a 20-goal scorer for the Canadiens. Last season, he added grit and speed when he traded for tough guy Nicolas Deslauriers, and before this season, he made trades for big forward Joel Armia and versatile defenseman Brett Kulak.

Kulak is a perfect example of a valuable player that Bergevin grabbed from obscurity. The 25-year-old from Stony Plain, Alberta played in the Western Hockey League for three seasons with the Vancouver Giants, where he was known for his durability. He missed just three games during his time with the Giants and played one season with Canadiens alternate captain Brendan Gallagher.

Last season, Kulak had two goals and six assists in 71 games with the Calgary Flames. He was the sixth defenseman on a team that was stacked on the blue line, which made him expendable, and his overall stats were not indicative of how well he played.

Bergevin Hit the Mark with Kulak

Montreal gave up two minor-league defensemen for Kulak in Matt Taormina and Rinat Valiev. At the time of the trade, the Canadiens were heading into the season with an injured Shea Weber, two young blueliners in Victor Mete and Noah Juulsen and one steady defenseman in Jeff Petry. Defense was their most vulnerable position.

After a facial injury to Juulsen in November, Kulak became the next man up. He spent 19 games with the Habs’ AHL affiliate, the Laval Rocket, producing 11 points during that time. Since the call-up, he has played in 27 games for the bleu, blanc et rouge, and has shown great speed, versatility and a tremendous hockey IQ.

He also showcased some of his talents during the Canadiens’ recent skills competition, where he finished as the team’s fourth-fastest skater. Despite that impressive feat, the most noticeable improvement is the Canadiens’ place in the standings since his arrival.

Before Kulak was called up, the Canadiens were on the cusp of a wild card spot and 11 points behind second place in the Atlantic Division. Since then, Montreal has jumped to third in the division and are just one point shy of the Toronto Maple Leafs. The Canadiens have been playing at a much higher level with Kulak in the lineup, and in that time they have a 17-11-1 record for 35 points and are winning sixty percent of their games.

There are certain numbers in hockey that give you a bigger picture of a player and how successful his game is. Since Kulak’s call-up in late November, he has been one of the team’s best defensemen when it comes to controlling shots (Corsi For %) and is second behind Weber in controlling scoring chances (Scoring Chances For %). That is impressive for a guy whose played in just 52 percent of the team’s games.

Over the last two months, he has split time with Weber and Jordie Benn. He has mainly been paired with the latter, but when you dive into the stats, it shows that he has become the ideal defensive partner for Weber. Their styles of play compliments one another.Weber is free to jump into the rush more and focus on his offensive and physical game, whereas Kulak will play a more reserved defensive role and lay down the hammer when he has to. 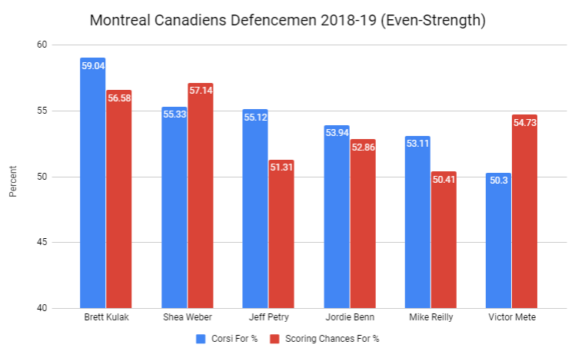 Breaking down the Montreal Canadiens’ defencemen rankings.You can tell by looking at both graphs that Kulak has been helping the Canadiens in every facet of the game. With number 17 in the lineup, the Habs go from controlling 53.4 percent of the goals to 59.4 percent during his shifts. That may sound like a minuscule six percent increase, but that is a big jump when you take into account that it is calculated per shift.

From special teams to five-on-five, his insertion into the lineup has paid dividends and contributed to the team’s success. When the trade went down right before the season started, it did not grab any news headlines, but in classic Bergevin fashion, the value was there. Management hoped Kulak could be a depth player on a maligned defense corps, but since his addition, he has proven to be one of the Canadiens’ greatest assets.

Ever since I was young, I lived and breathed hockey. I am a proud graduate of the College of Sports Media and Centennial’s Sports Journalism program. I spent two years covering the Oshawa Generals in the OHL before that I worked with CBC Sports and TSN.