LOS ANGELES — Carey Price tied Jacques Plante for most career wins by a Montreal Canadiens goalie, making 26 saves in a 3-1 victory over the Los Angeles Kings on Tuesday night.

Price won his 314th game in 611 appearances for Montreal, matching the total Plante had in 556 games with the team. 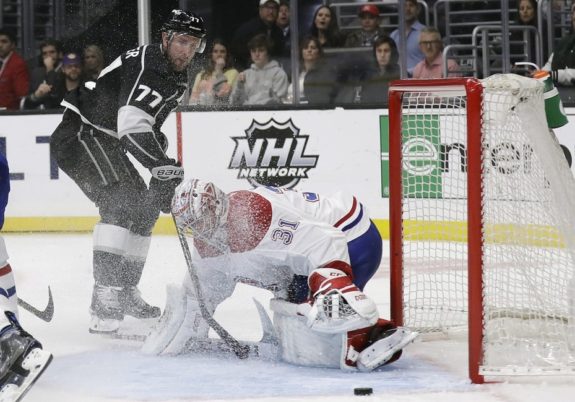 The Canadiens remained tied with Pittsburgh for the first Eastern Conference wild card, two points ahead of Columbus.

Matt Luff scored and Jonathan Quick stopped 21 shots for the Kings, who lost for the 11th time in 12 games.

Brendan Gallagher extended his scoring streak to four games by tipping in Victor Mete’s shot from the blue line and giving the Canadiens a 1-0 lead 3:11 into the first period.

Jordan Weal made it 2-0 at 10:07 of the second, scoring in his Canadiens debut after being acquired in a trade from Arizona at the Feb. 25 deadline. Dion Phaneuf turned it over to Weal at the right circle for his fifth goal of the season in 48 games with Montreal, the Coyotes and Philadelphia.

Shea Weber made it 3-0 just 49 seconds into the third period on a one-timer from Phillip Danault for his 10th goal.

Luff got his eighth goal on a shot through traffic at 11:03 to keep Price from earning his 44th career shutout.