For two seasons, Brandon Carlo has played for the Boston Bruins. And for two seasons, he has been a core part of the defensive group that has helped the team into the playoffs.

Yet, he hasn’t stepped foot on the ice for a single playoff game.

The 22-year old defenseman has suffered two season-ending injuries at the most inopportune times. The regular-season finale of the 2016-17 season resulted in Carlo getting a concussion and being ruled out for an extended period of time and missing the opening round of the playoffs where the Bruins fell to the Ottawa Senators. 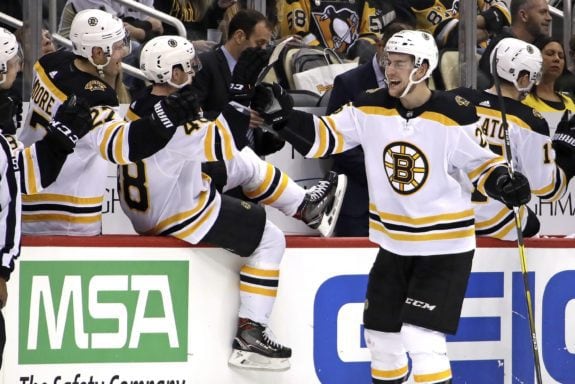 Then, in 2017-18, Carlo suffered an ankle injury in March that ruled him out for the remainder of the season. The Bruins went on to lose in the second round of the playoffs to the Tampa Bay Lightning.

Now Carlo is in his third season with Boston and the Bruins are priming for a run in the playoffs. Carlo has developed into a shutdown defenseman who can be relied on to stop opposing offenses. The Bruins will need Carlo and his defensive strengths if they want to shut down teams like the Toronto Maple Leafs or the Lightning come playoff time. Carlo has yet to suit up in the postseason and show what he can do in the brighter lights, but this season may finally be the time for Carlo.

In a league where the premise of offensive defensemen is the focus, Carlo provides the stay-at-home defensive style that goes under the radar. He certainly does not jump out on the scoresheet, as he has totaled only 28 points in 214 career games, and only six points in his 56 games this season.

Looking at the Bruins’ current defensemen, not many of them shape up like Carlo. Young stars like Torey Krug, Matt Grzelcyk and Charlie McAvoy are known more for their offensive production and power play time. Other guys like Zdeno Chara and Kevan Miller play more conservatively but don’t offer the speed and finesse that Carlo does. Carlo is pretty much the only young defenseman the Bruins can rely on in the defensive zone. Because of that, he may be the least talked-about young stud on the team.

The perfect example is his last game, in the Bruins’ 1-0 win over the New Jersey Devils on Sunday, March 5. You won’t see Carlo’s name in the stats. But watching the tape, his tough defensive game played a big part in how the Bruins were able to get their seventh shutout on the season.

Carlo’s game is similar to the style of now-Columbus Blue Jacket Adam McQuaid. McQuaid was traded by the Bruins at the beginning of this season and some questions were raised if this softened the back end. However, Carlo has stepped into a more prominent role this season, and while he may not have the fear factor that McQuaid brought, his defensive play is probably better than McQuaid.

When looking at statistics, people immediately go to the big three – points, assists and goals. However, when it comes to a player like Carlo, the key is to look at the less glamorous statistics to see how good he actually is.

Carlo is top-five on the team in plus/minus, blocked shots, average time on ice and hits. He boasts a plus-12 plus/minus, which is good for fourth on the team. In a league where the average is a minus-0.4, he offers a lot of upside in that category.

In terms of blocked shots, he again ranks fourth on the team with 70. Ahead of him are Miller, Chara and John Moore and the four of them make up roughly 33 percent of the team’s blocked shots. Blocked shots, in my opinion, are one of the most overlooked stats in the league. The stat speaks to the defensive play of Carlo and how good he is at getting into shooting lanes and breaking up scoring chances.

Carlo sits fourth on the team in average time on ice. He can be a reliable force to put up at least 20 minutes every game and between 25-28 shifts per game, as well. He has also shown that he can take on the biggest workload, as was the case in the Bruins’ 4-1 win against the Lightning, when he logged 21:19 minutes on the ice, leading all Bruins’ players.

For hits, he is fifth on the team with 107. He leads all Bruins defensemen in the category and it’s not even close. McAvoy is the next best at 73, a good 34 hits behind Carlo. Physicality is one of the best parts of Carlo’s game. He uses his 6-foot-5, 205-pound stature to his advantage to body opponents off the puck and get himself in passing lanes.

Having Carlo finish this season healthy will be crucial for both the Bruins and Carlo himself. Carlo will become a restricted free agent after this season with his entry-level contract expiring. Having three seasons of injuries will not help his cause for getting more money. And obviously, the Bruins need his defensive dominance if they want to go far in the playoffs.