BOSTON — Brad Marchand scored a power-play goal early in the opening period and Tuukka Rask made it stand up with 20 saves for his third shutout of the season, lifting the surging Boston Bruins to a 1-0 victory over the New Jersey Devils on Saturday night. 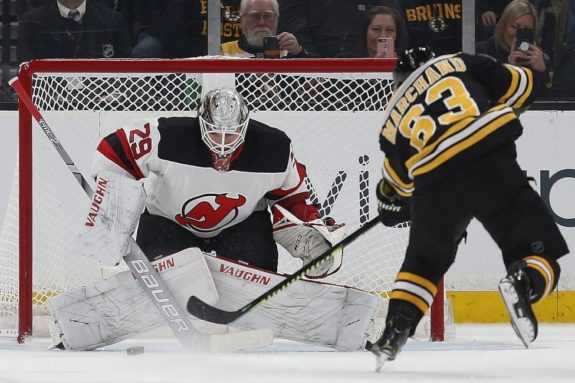 With Kenny Agostino in the penalty box for interfering with Rask, Marchand beat Blackwood with a wrister from the bottom of the right circle just 14 seconds into the power play after collecting a pass from Bergeron at 2:37. It was Bergeron’s 793rd career point, moving him into a sixth-place tie with Wayne Cashman on Boston’s all-time scoring list.

Marchand had his penalty shot after getting hooked by defenceman Damon Severson almost five minutes after his goal, but Blackwood made a right-pad stop.

Rask made a nice left-pad stop on winger Jesper Bratt, who cut in alone midway into the final period, bringing a loud roar from the crowd looking for some offence by the Bruins.

In the second period, the Bruins outshot the Devils 10-4, getting a couple of good chances in the final minute that Blackwood turned aside.

CAN’T MAKE THIS UP

Marchand played his 666th career game and entered the contest with 666 career penalty minutes against, yep, the Devils.

Bruins winger Jake DeBrusk, manning the front, with defenceman Charlie McAvoy carrying the rear, came jogging down a hallway holding a ladder to get a soccer ball down that was caught in some pipes in the ceiling about an hour before the game.

Typically, a group of players kick the ball to each other in a circle wearing shorts and T-shirts before they get into their uniforms for warmups.

Bruins: Host Carolina on Tuesday with the Hurricanes wearing their old Hartford Whalers jerseys, where the franchise was located before moving to North Carolina.