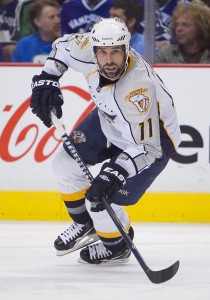 So much has been written in regards to the Nashville Predators finances the last few weeks, that many are missing the fact that Nashville has fairly quietly gone on a 7-1-2 run in their last ten games.  Most recently the spotlight continues on the new minority owner Brett Wilson.  Prior to Wilson, the big news was star goalie Pekka Rinne and his 7 year $49 million dollar contract.  In case anyone was interested, on ice, the team is second in the Central Division.  That’s been par for the course in Nashville this season.

There is a lot to be anxious about financially in Nashville.  The team has unrestricted free agent Ryan Suter they have to deal with.  In addition to that, team captain, Shea Weber is a restricted free agent at season end.  Those two big pieces are top priorities in the front office of Nashville.  The player contracts of the NHL, just like any professional sport, become big topics of conversation when ever team stars are involved.  What shouldn’t be overshadowed is that the Predators, on ice are becoming one of the top teams in the Western Conference.

Unfortunately, this is not the first time this season the Predators on ice abilities have been overlooked.  During the preseason while pundits and analysts were making their predictions, most were swarming the potential show down between the Red Wings and Blackhawks for Central Division supremacy.  As we reach the quarter mark of the NHL season, Chicago has indeed proven they will be a force this year, yet it is Nashville that sits second in the division.  The Predators also went toe to toe with the Blackhawks in their one meeting so far this year, dropping the game in overtime.

What the Nashville Predators are starting to build, on ice, is just as important as any contract or ownership move.  The Predators are gaining confidence.  Earlier this season Nashville dropped back to back games in which they held the lead going into the 3rd period, which indicates the lack of instinct necessary to finish off their opponents.  However, in the last ten games, the only game they took the lead into the third period and did not leave with two points, was against the Blackhawks.  The real sign that Nashville is starting to believe they deserve to win is this: Since the Chicago game, Nashville has outscored their opponents 10 – 2 in the third period.  That run has spanned over seven games and is proof that crunch time is becoming their time.

The focus of the Central Division will continue to stay on the Blackhawk’s high powered offense, Detroit’s recent woes, and mixed in will be the surging St. Louis Blues.  When looking at the Nashville Predators through the sports looking-glass, it’s easier to comment on what they might do in the offseason than what they are doing  on the ice.  None of that has fazed this team for the last three weeks.  They are the under appreciated that will make everyone take notice.  They are the Nashville Predators.  Just like their namesake, they lay in wait and will strike you down when the time is right.  The real hunt will begin in April and the Predators will be looking for their prey.