NASHVILLE — Colton Sissons scored 3:05 into overtime to give the Nashville Predators a 4-3 victory over the Vancouver Canucks on Thursday night.

Jay Beagle, Brock Boeser and Bo Horvat had the goals for the Canucks, who had won three in a row.

Vancouver tied it with 43.5 seconds remaining in the third period when Horvat, parked at the far post, slipped one past Rinne. The Canucks were short-handed at the time and had pulled goalie Anders Nilsson for an extra skater.

In overtime, Bonino sent a pass from the left boards to Sissons skating through the slot and he elevated a shot over Nilsson. 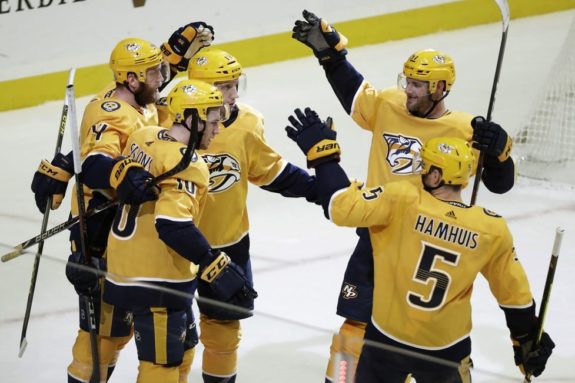 Hartman scored the game’s first goal at 5:52 of the opening period.

With the Canucks changing lines, Predators defenceman Dan Hamhuis sent a long pass from inside the Nashville zone to Hartman at the red line. Skating in on the right side, Hartman used Vancouver defenceman Ben Hutton as a screen and beat Nilsson on the glove side with a wrist shot from above the right circle.

Bonino made it 2-0 at 8:40 of the first with a wrist shot from the left faceoff dot that beat Nilsson high to the far side.

Beagle halved the Nashville lead at 15:15 of the first.

With the Predators on a power play, Markus Granlund intercepted a pass from defenceman Mattias Ekholm in the neutral zone. Granlund carried the puck into the Nashville zone on the left side. Inside the circle, he sent a pass to Beagle in the slot, where he made a quick forehand-to-backhand move and beat Rinne on the stick side.

Nashville regained its two-goal lead at 11:05 of the second when Jarnkrok tipped Kyle Turris’ shot past Nilsson, who finished with 30 saves.

Turris returned to Nashville’s lineup after missing eight games with an injury.

NOTES: Beagle’s goal was his first with the Canucks. … Nashville is 16-1-0 when scoring first this season. … Middle Tennessee natives David Price and Mookie Betts of the World Series champion Boston Red Sox attended the game. Betts is from Nashville and Price is from Murfreesboro and attended Vanderbilt in Nashville. … Hartman has six goals in eight career games against Vancouver.