The season is starting to wind down and the playoffs are inching closer. The Central Division remains the cream of the crop in the NHL and the race is only getting tighter. The Nashville Predators, Winnipeg Jets, Minnesota Wild, and Dallas Stars are all jockeying for position and the competition is getting nastier by the day. Tuesday night looked like a classic playoff game where both goalies were playing lights out, unexpected players were getting in on the extracurriculars, and depth players were stepping up.

It wasn’t pretty, but it was a lot of fun, so let’s see who made a real impact on the ice.

No, Roman Josi was not able to play on Tuesday, but an old captain made his return to Bridgestone Arena. Mike Fisher stepped onto the ice as the Nashville faithful cheered uncontrollably. Fans had no reason to worry, as he continued his solid play. He started on the second line between Kevin Fiala and Craig Smith, a role I wouldn’t say that he’s particularly suited for, but it wasn’t too bad. Fisher went up against the second line, and did completely average, which is fine. Fiala mostly carried the trio, but at the end of the day it all worked out. For reference, I’m using unblocked shot attempts (Fenwick), scoring chances (SC), high danger chances (HDC), and zone starts for (offensive) and against (defensive). All stats used are at five on five. 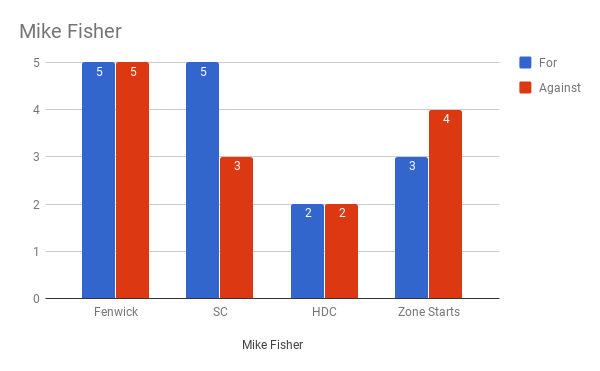 No goals were scored for or against while Fisher was on the ice, but that’s ok. It’s not like he wasn’t pressuring, as Fisher created one shot and one of the five scoring chances that occurred. That wasn’t where the Stars were beaten by Fisher though. The old captain’s defense was impeccable as he stifled Jason Spezza and the Stars’ middle six.

I thought there was going to be a longer re-adjustment period, but things are going smoothly. While I don’t expect his offense to get much better, if it does get better at all, the defense is wonderful. He hasn’t missed a beat in the slot, although his corner work is still coming along. I think the current one game on, one game off format is perfect for preserving the old man’s health as the season winds down.

The Stars’ big three is Jamie Benn, Tyler Seguin, and Alexander Radulov, and it’s quite the three-headed monster. The trio has played with each other on and off throughout the year, but has amassed 179 points in 201 games and looked like a dominant possession juggernaut. The team looks even better when guys like Jason Spezza, Martin Hanzal, Devin Shore, and Mattias Janmark are forced to play on the second, third, and even fourth lines. But let’s not focus too much on the depth, let’s take a look at the four minutes that the Stars’ big three spent together. We’re using the same stats as the previous example. 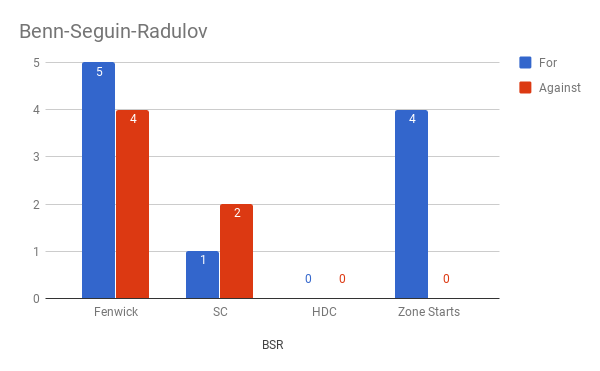 The BSR line won the possession battle, but lost in every other meaningful category. P.K. Subban was up against the trio all night, although he focused on Benn and Seguin while Radulov was on another line. But when the line was together, Subban was on them like white on rice. When it mattered most though, the Predators stepped up and shut down one of the most dangerous lines in hockey. The Stars only managed one scoring chance with the trio on the ice, which is for sure a disappointment as there was no shortage of zone sheltering. To receive four offensive zone starts and only produce one scoring chance and zero high danger chances isn’t what Ken Hitchcock envisioned when he sent the line over the boards.

We have to give credit to the JoFA line though, who played a great two-way game that smothered the Stars. While they didn’t produce any goals, they kept a few off the board as well.

The Stars are not the team of yesteryear, where games were consistently ending five to four and goalies were going crazy. Ken Hitchcock has made a world of difference, as the Stars now allow the third fewest amount of high danger chances at five on five. On top of that, they allow the fewest high danger goals, which is partially due to Ben Bishop, but the defense has been great as well. That’s why they have a heat map that looks like the one above. It looks great compared to the Predators, who rely on the immaculate performance of their goaltenders.

If people want to make a Vezina case for Pekka Rinne, this image should be what they lead with. That red area around the net is terrifying, as that shows that the defense is hot garbage around the net. I think the Predators have the most talented defense in the NHL, but clearly, they’re far from the best.

With that said, the Predators gave the Stars a taste of their own medicine on Tuesday. Once again, let’s go the chart. 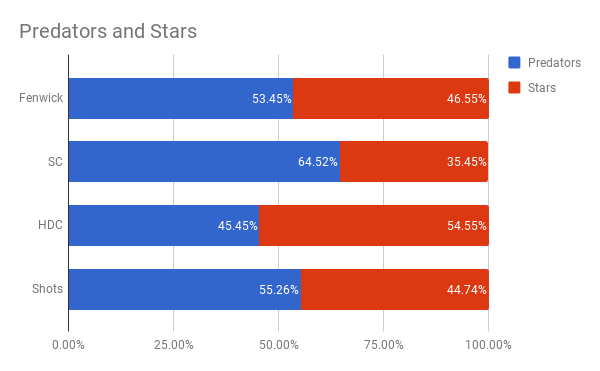 What a beautiful picture for Predators fans. They won every category in a meaningful way, except for high danger chances, although they only lost it five to six. When we include all situations, the Predators actually take a lead of eight to seven. While the heatmaps inspire dread, this game should lead Smashville fans to a sigh of relief. They showed they could take on an offensive powerhouse and keep them to very little significant offense.

The Anaheim Ducks look to reignite some of the fire these two teams had during the 2017 Stanley Cup Playoffs. It’ll be some old-time hockey that’ll have fans cheering and the team doctors earning their money.

It’ll be a game between two bitter rivals who will do whatever it takes to win the day.