NASHVILLE — The Nashville Predators’ sizzling 13-3 start to the season is a distant memory. The defending Presidents Trophy winners have lost three straight and seven of the last 11 on their home ice called Smashville.

Part of the problem is only the top line is scoring with any regularity. 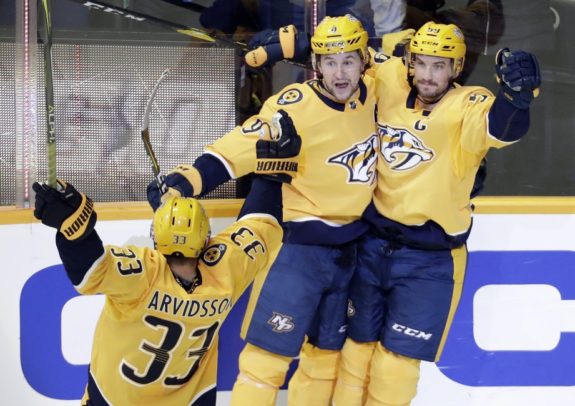 It’s enough to possibly force general manager David Poile into another big move before the NHL trade deadline Feb. 25. Fans are lighting up social media wanting something to change to snap the Predators out of struggles that have dropped them to eighth overall in the league standings. After winning the Central Division a year ago, Nashville is second with 71 points — four behind Winnipeg.

Rinne Believes Losses Could Be a Good Thing

Goalie Pekka Rinne believes the losses could possibly help the Predators in the long run.

“I feel like everybody feels the urgency and desperation …,” Rinne said Wednesday. “I mean you look at the standings and we still up there, but you don’t want to feel comfortable in our division. We just got to play better. That’s the bottom line. Get results …, and individually we all need to be just consistent, myself included, but it’s going to come. And hopefully we can look back in a little bit and … (see) that we grew from it and we learned from it.”

The Predators dropped their third straight game Tuesday night 3-2 to Detroit , which came in next to last in the NHL in points. Coach Peter Laviolette put them through practice Wednesday working on a few issues, like a power play that has produced just three goals in 49 opportunities over the past 14 games. Nashville also has allowed the first goal in 31 of its 59 games.

Still, Laviolette said he liked how the Predators played their last couple games with a 5-4 overtime loss to St. Louis on Sunday followed by the loss to Detroit.

Laviolette and the “Little Things”

“There’s 10 different things that could’ve helped us or made us better,” Laviolette said. “It could’ve been a face-off, it could’ve been a power-play, a penalty kill, a better third period. An opportunity that goes in the net instead of not going in the net. There’s a bunch of little things I think that can happen. … We did a lot of good things in the last two games and the results didn’t come our way.” 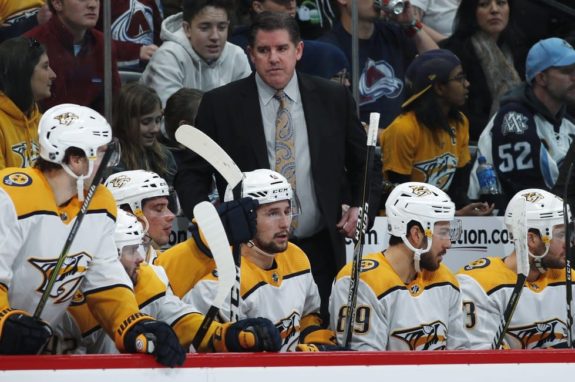 They could use more production beyond the JOFA line of centre Ryan Johansen and Filip Forsberg and Viktor Arvidsson. Johansen leads Nashville with 52 points in 57 games, while Arvidsson leads the team with 25 goals in just 35 games. Forsberg is second with 20 goals in 42 games because of injuries. Arvidsson has been on a tear since returning from a broken thumb scoring 11 goals in 11 games along with an NHL-best 17 goals since Dec. 31.

There’s a drop-off after that.

Craig Smith, who has not missed a game this season, ranks third on the Predators with 16 goals.

Nashville has 23 games left, starting Thursday night hosting Montreal. The Predators lead third-place Dallas by eight points in the division and know teams like St. Louis and Minnesota are pushing too.

“Consistency is something that we need to work on,” Forsberg said. “But at the same time, we’ve seen our highs. If we can keep going, I think we’ll be fine.”

Who Should Make the Predators’ Expanded Roster?