There aren’t too many jobs truly up for grabs as the New Jersey Devils prepare to begin their first training camp under new head coach John Hynes and new GM Ray Shero, but things can change as quick as a heartbeat as we all know in the NHL. There are certainly young players that are competing to fill a few spots in the lineup, while other players are looking to solidify their standing for the opening night roster. Injuries always create opportunities for someone else to step up and the Devils will already experience that as one of their youngsters looking to crack the everyday lineup, Reid Boucher, already suffered a concussion in the first of two games New Jersey played in Buffalo last weekend during a rookie tournament.

Boucher pretty much was guaranteed a spot in the lineup as long as he didn’t totally bomb in camp, as it was he and defenseman Damon Severson who were dubbed the unofficial leaders at the team’s rookie camp in early July. Although he hadn’t had as big of an impact at the NHL level as Severson has to this point in time, Boucher has most definitely improved his two-way play and management believes he is ready to take that next step. Having said all that, the uncertainty (at press time) around the severity of his concussion, as well as any timetable for a return to the ice may mean that another spot is available in the Devils flock of forwards. 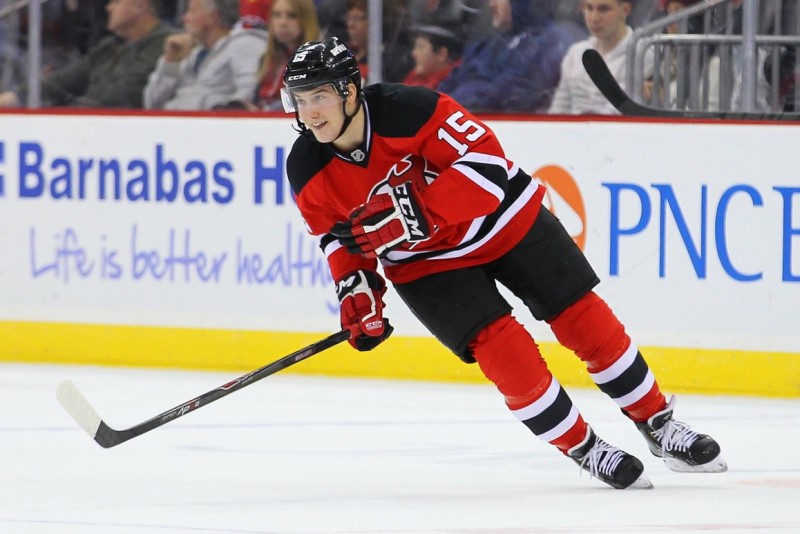 Reid Boucher’s status is now up in the air. (Ed Mulholland-USA TODAY Sports)

Here’s what we do know:

These players are a virtual lock to be in the lineup opening night vs. the Winnipeg Jets on October 9 — barring any injury, trade, not being able to keep up in coach Hynes new system or anything else bizarre like that: Patrik Elias, Adam Henrique, Kyle Palmieri, Mike Cammalleri, Travis Zajac, Jacob Josefson, Jordin Tootoo, Stefan Matteau, Tuomo Ruutu and Jiri Tlusty. That’s ten players, which leaves only likely three spots open to be filled by either: the injured Boucher, Stephen Gionta, KHL-import Sergey Kalinin, Albany Devils leading goal scorer Paul Thompson, 2015 1st round pick Pavel Zacha, 2014 1st round pick John Quenneville, UFA signing Joseph Blandisi or 2011 3rd round pick Blake Coleman; or maybe even Tyler Kennedy or Lee Stempniak — who will both be in camp on PTO’s (Professional Try-Out).  Maybe Shero is just bringing them in just to see how the younger players — who maybe thought winning a job would be a lay-up (against their main competition in the same age group) — respond to some stiffer competition.

Jiri Tlusty scores on a shot through some traffic, hopefully a sign of things to come:

Entering the final year of his current contract, it’s not out of the realm of possibility that someone like Ruutu gets beat out by both Zacha & Quenneville (who both signed entry-level deals this summer) and/or traded if the team goes with a true youth movement that allows a group of youngsters (including Matteau, Boucher + young d-men including Severson) to go through growing pains together. The extremely late September 16 signing of Tlusty (one-year/one way, $800,000) may indicate that Boucher’s injury is a serious one. If that is indeed the case the addition of Tlusty (without subtracting anyone) is quite the savvy move by Shero. 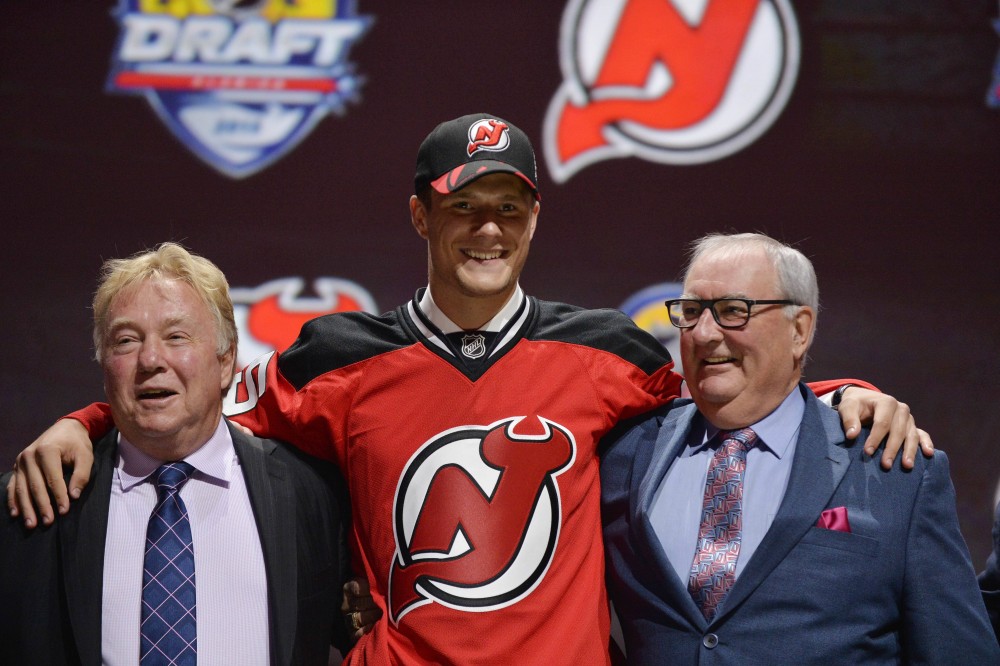 With a total of seven preseason games scheduled (three home, four away) the forwards battling for NHL spots will likely have several opportunities to make their cases as to why they belong on the opening night roster. Other minor questions that will surface will include:

Can Zacha not only make the opening night roster, but also stick around for the full season?

Shero’s team needs an injection of energy, something for the fans to get excited about, a reason to go to the arena, and Zacha may be it. The next few weeks will go a long way to determining whether or not he is ready to take the first step in his NHL career or he returns to his team in the OHL to gain some more seasoning.

Are Elias and Henrique going to play center or on the wing?

Both have been able to flip-flop during the past few years, but some sort of stability could be good — especially for the younger Henrique in building towards the future. Elias has always played his best hockey at left-wing, and despite playing as a center for the majority of the last 3-5 seasons, he may be better slotted at LW in what may be his final NHL season.

Will Zajac ever be able to play again like the no. 1 center he’s being paid as?

He hasn’t had much to work with since the departures of Zach Parise and Ilya Kovalchuk; sure playing with Jaromir Jagr had its benefits at first, but in some ways at the end of 68’s tenure in New Jersey it was more of a distraction. Zajac will have to chip in points more on the PP also, something which has been lacking lately in his game. A 45-50 assist season would be a nice step in the right direction — not to mention it would double his point total from the previous season. Here’s hoping he finds some chemistry playing alongside Cammalleri or Palmieri or both.

This is the version of Travis Zajac that the Devils will need again this season; 18 goals would be nice too:

Can Palmieri become the 20-goal scorer that Anaheim’s GM thinks he will?

It was no secret that Ducks GM Bob Murray wanted to keep the New Jersey kid on the west coast, but he also feared he would risk losing Palmieri (without compensation) if he was unable to re-sign him — mainly due to money spent in other places — if he continued on his development curve. The Devils hope the Ducks’ loss becomes their gain — let’s keep it real: if there was ever a team that needed a goal scorer to blossom after a change of scenery, it’s the Devils. If he pots 20-30 goals this season, it could mean New Jersey is having a productive year — or Cammalleri is injured!

Can Josefson not only stay healthy for a full season, but prove he can be an effective second or third line center on a nightly basis?

Due to injuries the 24-year-old Swede has only 180 games of experience despite being a 2009 draft pick. Last season (in 62 games) was one of, if not his best, where he registered 11 (6g-5a) of his 36 career points and was a solid contributor on the PK. Shero has mentioned multiple times since taking over that basically this could be a make or break year for Josefson and that one of the reasons Scott Gomez wasn’t brought back was because they wanted (and needed) to see ‘what they had’ in him.

Barring something out of the bizarro world it’s a safe bet that the starting six defensemen on opening night will be Andy Greene, Adam Larsson, Damon Severson, John Moore, Jon Merrill and Eric Gelinas. The real battle will be for the seventh spot and there will be four main contenders: Seth Helgeson, Raman Hrabarenka, Vojtech Mozik and David Schlemko. It’s tough to gauge at this point who has the edge, but the wildcard is definitely Mozik, who’s shot is a different dimension and much more lethal than the other three vying to be the first man on tap to come in should someone falter, get hurt or get traded. Helgeson and Hrabarenka’s biggest assets are their size and late, late summer UFA signing Schlemko carries more NHL experience (over 200 games) with him. Each brings something different to the table, depending on what the coaching staff wants out of their seventh D.

Get to know Vojtech Mozik in this highlight package from last season:

Larsson, Severson, Gelinas and Merrill all had their ups and downs last season, and hopefully it was all for the good of their growth and development. But they will need to continue to get better and especially more consistent if they want to help New Jersey become a playoff contender team in what looks to be another ultra-competitive Metropolitan Division. All of them will be basically getting fresh starts under a new coach who will be putting in a system that will be a tad different from what they have been accustomed to in the Devils system.

Not too many questions to answer here unless we are discussing how many games Cory Schneider will be starting in the Devils crease. In his first full season as an NHL starting goalie the 29-year-old appeared in 69 games, finishing with a 26-31-9 record. If New Jersey were to have a really good season 62-65 games would be an ideal number of starts for Schneider to make, with Keith Kinkaid (unless he completely regresses) or Yann Danis picking up the slack in the other 17-20 games. 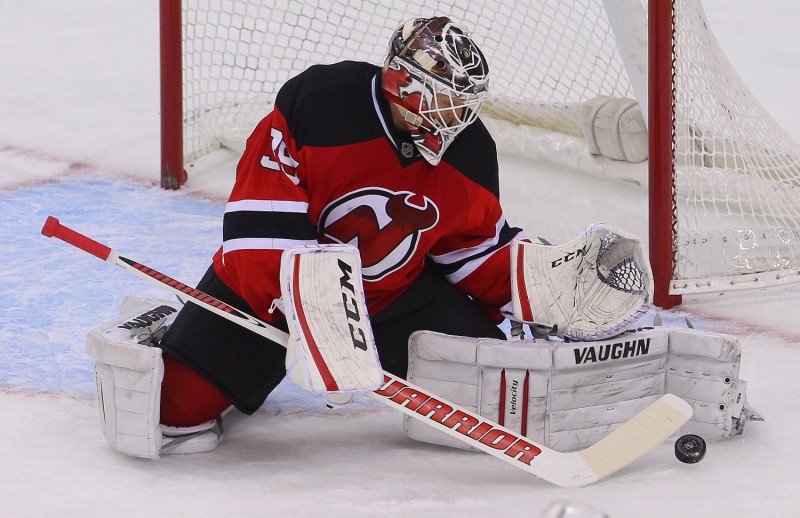 Schneider has taken over the No. 1 job in New Jersey. (Ed Mulholland-USA TODAY Sports)

Schneider has often been a hard luck loser in his two seasons since being traded from Vancouver, but he also hasn’t stolen many games that were out there for the taking. He has been almost as good as expected, but he will likely have to take his game to the next level; as the resident starter for the foreseeable future he will have to likely play just a tad better to be able to go toe-to-toe consistently and to earn a playoff berth with/against the likes of Henrik Lundqvist, Braden Holtby, Carey Price, Tuukka Rask and Ben Bishop in the Eastern Conference.

Here is who The Hockey Writers believes will be on the 23-man, opening night roster for the New Jersey Devils. DISCLAIMER: although the players listed will be listed as if they were lines this is just us throwing three names together and NOT trying to predict line combinations, pairings, etc before a practice or game has occurred: 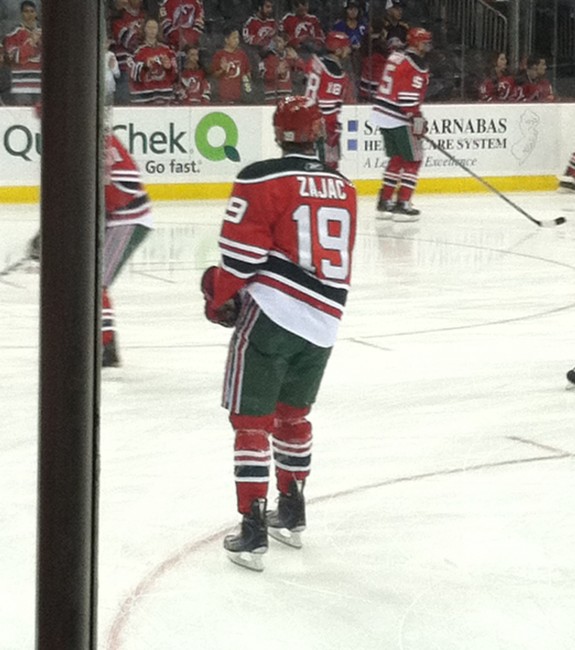 Travis Zajac will be the biggest X-factor in NJ this season. [Photo by Kevin Wetzel]