The New Jersey Devils had an active NHL trade deadline. They completed four trades over three weeks and parted with key contributors such as Marcus Johansson, who went to the Boston Bruins, and Brian Boyle, who went to the Nashville Predators.

Those moves by general manager Ray Shero opened up some roster spots in the NHL. The Devils have also been hit by the injury bug up front, with five of their top nine forwards out of the lineup. Reinforcements were needed and came after Monday’s trade deadline passed.

The Devils called up top prospect Michael McLeod, as well as Nathan Bastian, Mackenzie Blackwood, and John Quenneville among others. With the Devils’ playoff hopes finished, these players will get a chance to audition for NHL gigs and could have an impact on the end of the Devils’ season.

McLeod’s development may be progressing slower than some have hoped, but he’s still one of the team’s top prospects. Like Bastian, he had played in one NHL game this season before being called up on Monday. He’s also played well in his time down in the AHL, with 21 points in his last 31 games.

After some early season struggles, Binghamton’s head coach, Mark Dennehy, has noticed a difference in McLeod. “Great attitude and checks off a lot of the boxes that means playing Devils hockey,” Dennehy told reporters on Monday afternoon. “He skates, competes, and wants to get better. He plays on our most productive line on Binghamton, by far, and is usually matched against the other team’s best line. He has really matured this year and sees what it takes to get to the next level.” 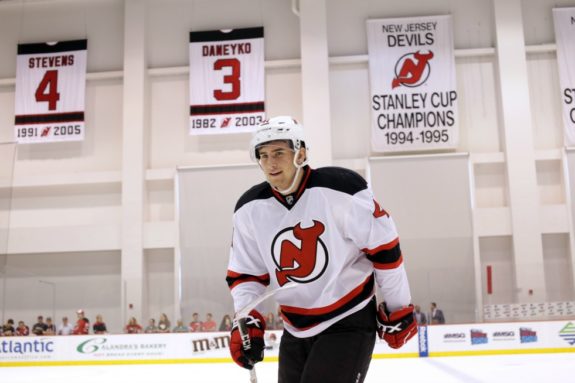 Time will tell where McLeod ends up in the NHL, but he is making some strides, and with all the injuries piling up, he’ll get more than enough ice time to keep building on those strides. His situation isn’t much different than other Devils’ prospects. If he plays well, he’ll be in the mix for a roster spot next season.

Bastian has already made his presence felt in the short time he’s been with the Devils, notching his first NHL goal against the Montreal Canadiens on Monday. It was his first NHL game since his only other appearance on Jan. 19. He had played well for the Binghamton Devils (AHL) in between then, totaling seven goals in thirteen games.

Bastian is 6-foot-4, 205 pounds, so he adds a bit of size and physicality the Devils don’t have. He’s strong around the net and scores the dirty goals as he did against the Canadiens. Even though his game is predicated around getting to the net, he’s capable of doing more. He’s totaled 131 shots on goal in 56 games in the AHL this season, so he can generate some offense.

His ceiling may not be higher than a third or fourth-line forward, but the Devils could use some depth there. Their bottom six gets caved in on a consistent basis, and they don’t score much. Bastian has shown in the AHL that he can put the puck in the net, but it needs to translate to something in the NHL. If that happens over the Devils’ remaining games, he’ll put himself in contention to grab a roster spot in 2019-20.

It’s been a wild season for Quenneville, and not always in the best way. He made the Devils’ NHL roster out of training camp but was sent down after four games. Once he returned to the AHL, he found his scoring touch and averaged a point-per-game. He earned himself another NHL call-up but failed to produce and was returned to the AHL again. To date, he has no points in 16 NHL games this season. 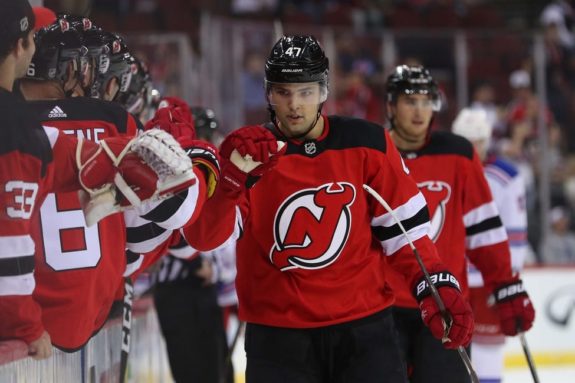 Even though Quenneville has gone back and forth between leagues, it hasn’t stopped him from producing in the minors, where he has 30 points in 32 games. He played in the Devils 2-1 win against the Canadiens on Monday. However, he left after just seven shifts and five minutes of ice time after he suffered a mysterious injury, adding to his bad luck this season.

It may seem like a now or never situation for Quenneville, but he is only 22 years old. That said, it is his fourth year with the organization, and he’s yet to crack the lineup as an NHL regular. He needs a strong end to the season, and thankfully, his injury is only a day-to-day thing. There’s an opportunity for him to play with Taylor Hall, Kyle, Palmieri, Jesper Bratt, Miles Wood, and Pavel Zacha all out with injuries. He’ll have to make the most of his ice time when he returns to the lineup.

Blackwood made a name for himself earlier this season when he took over for a struggling Keith Kinkaid and an injured Cory Schneider. He appeared in 13 games and made 11 starts, posting a .926 save percentage and a goals saved above average of 5.07. He returned to the AHL after Schneider was activated off injured reserve but was recalled by the Devils after Kinkaid’s trade on Monday.

There’s no doubting Blackwood’s potential, but it’s too early to proclaim him as Schneider’s successor. While he’s performed well in the NHL, he’s never posted a save percentage above .907 in the AHL. That isn’t always a determiner for NHL success, but it shows there are still things to improve, and that he could benefit from a larger sample size of NHL games. 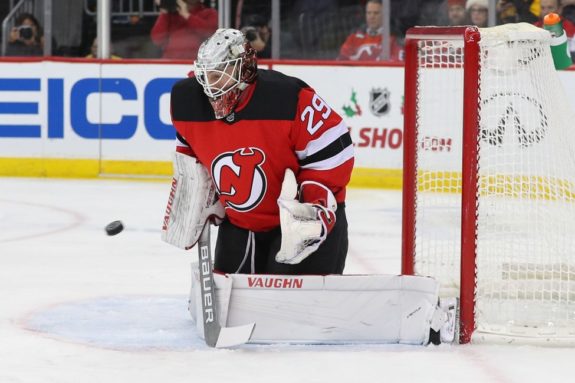 Blackwood will get the chance to work on his game in the NHL for the rest of the season. With Schneider healthy and playing the best he has in over a year, the two will likely split starts the rest of the way. And that should benefit Blackwood as he won’t have to start every night, especially with an injury-riddled team. There’s a good chance he and Schneider will be the Devils’ netminders in 2019-20, so a strong close to the season would be a big positive.

The trade deadline offered the Devils the opportunity to wipe the slate clean and get a fresh start. Now it’s about what comes next, and developing their young players is one part of the equation. Any prospect that plays from here on out will be showcasing themselves to see how far they’ve come along.

For those who still need time to develop, they could earn valuable experience by finishing the season in the NHL. And that’s what the Devils will be looking for at the start of next season. Not all of their improvements will come through free agency or trades. Some of their prospects will have to take a step forward and make an impact in the NHL. Otherwise, they could be in for some more struggles before turning a corner.