Six games into the season, Damon Severson is off to exactly the start the New Jersey Devils needed from him.

He has five points in six games, and has some of the best underlying numbers on the team at five-on-five. He’s on the Devils’ second pair with Andy Greene, a duo that’s had success in the past and is currently doing so to start the season.

The Devils are a better team when Severson is playing at his best. Is his start to the season just a fluke? Or a sign of a breakout season?

Devils Getting the Most out of Severson

The Devils bet big on Severson and other younger players to take a step forward in 2018-19. So far, they’re getting what they’ve asked of him. He has always posted good results at five-on-five throughout his career, and his start to this season has been no different. He has great shot rates and is having a positive impact on the ice, as the following graph will show. 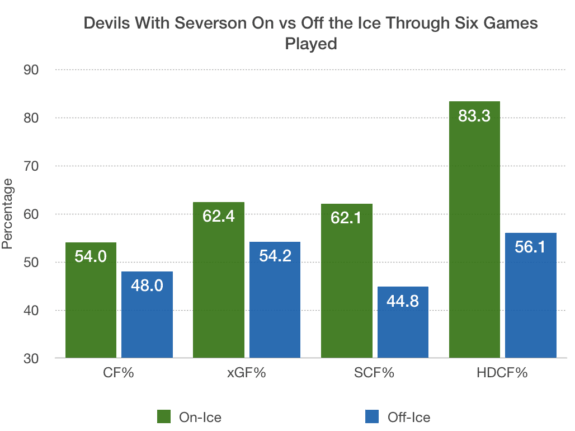 The Devils are controlling more shot attempts (CF%) and have been expected to score more (xGF%) with him on the ice. They also aren’t giving up much in the way of scoring (SCF%) and high-danger chances (HDCF%). Neither a 62.1% SCF% or 83% HDCF% is sustainable over a full season, but it does further demonstrate how strong a start he’s had.

In addition to his shot rates, Severson has been able to provide some offense from the blue line, where he has four points at five-on-five in six games. I doubt he’ll be able to continue at that pace. But the Devils are deploying him in favorable situations (more on that below), so he’ll be in good position to continue adding offense.

A big reason for Severson’s start to the season has to do with Greene. The two have had success in the past and have rekindled it to start 2018-19.

Through six games, Greene and Severson have the Devils’ best five-on-five results of their defense pairs. They have a 53.72% CF% and an impressive xGF% of 67.53%. The Devils also hold a ridiculous 22-4 advantage in high-danger chances with them on the ice.

One thing to note about Greene and Severson is how Devils head coach John Hynes has deployed them. They have a zone start ratio (ZSR) of 62%, which means they’re avoiding hard minutes and getting favorable matchups.

In the past, Greene and Severson usually saw some of the toughest competition of any Devils’ defense pair. With them being kept away from those minutes, they’re taking big advantage of their favorable matchups. Their usage may change at some point during the season, and their numbers will come down. But if they keep getting favorable zone starts, their strong play should continue for an extended period of time.

Can Severson Keep up the Strong Start?

There’s a good argument to be had for Severson being the Devils’ best defenseman through six games. Even when his results do even out, he has a few things working in his favor.

The first being how the Devils deploy him. Since he’s not getting hard defensive minutes, he should be able to keep taking advantage of some easier matchups. He can move the puck at a high rate and has good offensive instincts, which will help if he continues to remain in favorable situations.

The second thing working in his favor is his partnership with Greene. Over the last two seasons, Severson spent most of his time with John Moore but had mixed results, at best, with him. With Moore now in the Boston Bruins organization, Severson won’t be tied down to him. And with Greene, he’ll be playing alongside someone he’s had success with in the past.

Severson’s Start Is No Fluke

It’s hard to not be impressed with Severson’s start to the season. The Devils seem to have found the right role for him, which should only help the rest of the way, even when his numbers regress.

The Devils needed a lot from Severson this year, and they’re getting that so far. He’s in the second season of a six-year deal that comes with a cap hit just over $4 million a season. It’s time for him to start living up to it, and all signs seem to indicate he’s heading in that direction.

The Devils sure hope that is the case, especially with a blue line that doesn’t have the greatest depth. If they continue to play him in situations that work to his strengths, he could have one of the best seasons of his career. That will lead to a breakout season rather than just a fluke start.