On Thursday night the New York Islanders scored six unanswered goals against the Toronto Maple Leafs en route to a 6-1 victory at the Nassau Coliseum. This win came just three days after a trade deadline during which general manager Lou Lamoriello and the front office decided to do nothing. 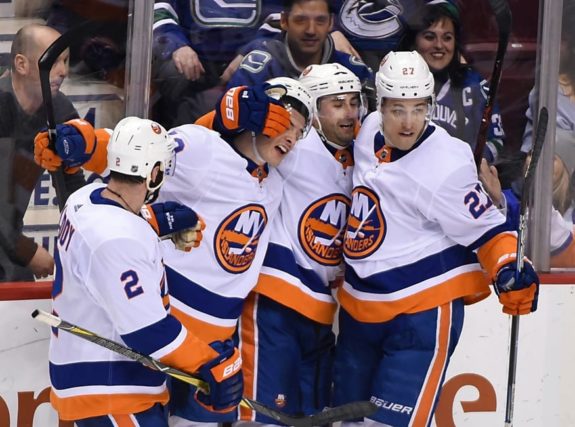 Islanders have experienced a lot of unexpected success this season, but will this team be able to make a deep playoff run in its current form? (Anne-Marie Sorvin-USA TODAY Sports)

It’s not like there was no market. Around the league, big deals were being made left and right. Former Philadelphia Flyer Wayne Simmonds was shipped to the Nashville Predators and former New York Ranger Mats Zuccarello was traded to the Dallas Stars. In arguably the biggest deal of the day, Ottawa Senator Mark Stone was acquired and subsequently extended by the Vegas Golden Knights.

Fans and pundits have spent a great deal of time debating whether or not the New York Islanders deadline inactivity was the correct play. Let’s dissect their situation and decide for ourselves, shall we?

After torturing the fans with the likes of Jack Capuano and Doug Weight coaching their team, the Islanders have finally employed not only a Stanley Cup-winning bench boss, but the fourth-winningest coach in NHL history in Barry Trotz. Trotz fell into the Isles’ lap after a contract dispute caused him to step down as Washington Capitals’ head coach in mid-June, less than a month after helping the Capitals win their first championship in franchise history. When the 56-year-old Trotz first arrived in New York, the Islanders were coming off a season when they allowed more goals than any other team in the National Hockey League. During a Q&A with The Athletic back in August, Trotz detailed his focus on defense:

” There’s going to be change. It’s going to be structurally, on and off the ice, expectations are going to change. … On the ice, I have a vision of how we can play to be better. One of the easiest things to correct, if there’s a commitment and a buy-in, is keeping the puck out of your net. We’ll need a bigger buy-in, we’ll put some structure, we’ll make sure the details are there and we’ll make players accountable.” (from ”We’re under construction. It’s a great thing.’: Exclusive Q&A with Islanders head coach Barry Trotz’ — The AthleticNHL — 8/15/18)

Trotz’s words have rung true. The Islanders have experienced one of the most impressive defensive turnarounds in league history. Thanks to exceptional coaching and efficient goaltending from both Robin Lehner and Thomas Greiss, the Islanders have transformed into one of the best defensive units in the NHL. The Isles have allowed just 145 goals in 63 games, 13 fewer than the next-best defense, the Boston Bruins. 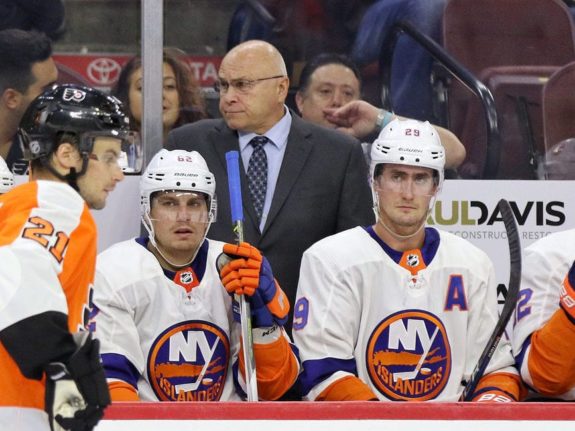 Trotz wasn’t the Islanders’ only big upgrade during the offseason. They also ended former president and general manager Garth Snow’s reign of terror by hiring Lou Lamoriello as president of hockey operations.

Lamoriello also has an awfully impressive resume. He was appointed team president of the New Jersey Devils and named himself general manager in 1987. During his time in Jersey, Lamoriello built a dynasty. His Devils went to five Stanley Cup Finals and won three Cups in 1995, 2000 and 2003.

In 2015, Lamoriello left New Jersey for the Toronto Maple Leafs. There, along with head coach Mike Babcock and star center Auston Matthews, he helped bring a struggling franchise back to relevance. Lamoriello was elected into the Hockey Hall of Fame as a builder in 2009.

Lamoriello’s biggest acquisition since joining the Islanders was undoubtedly Lehner. After dealing with subpar play and mental illness with the Buffalo Sabres, Lehner has overcome his demons and has been one of the best goaltenders in the league this season. As of Friday morning, not only does Lehner rank first in save percentage, but he has also allowed just 2.07 goals per game, the lowest GAA of anyone with 30 or more games in net. 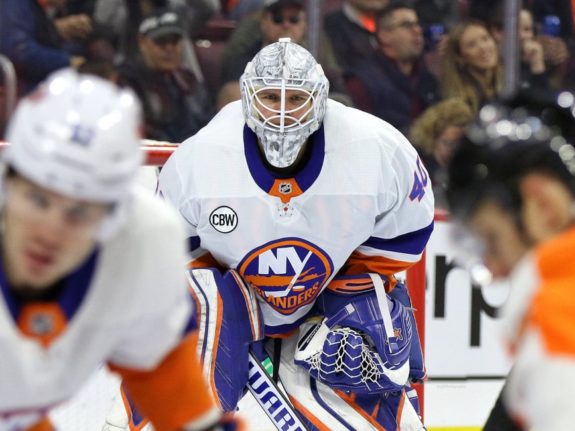 This is the first year of the new regime. Trotz and Lamoriello are still pretty new to the organization. The goal of season one has always been to evaluate players at all levels, any success they’re having is just a bonus. Needless to say, the Isles are already way ahead of schedule.

It feels like a lifetime ago that John Tavares spurned the Islanders and their fans in free agency, opting to leave the only organization he had ever known for his hometown Maple Leafs.

Truth be told, it’s only been about eight months since July 1, 2018, a day that will live in infamy in the hearts of each and every Islanders fan. Despite the new hires in the front office and coaching staff, there was still a lot of negative energy surrounding the organization.

Preseason projections barely gave the Islanders a chance to contend for a playoff berth. Well, it’s almost March and they sit atop the Metropolitan Division; which just goes to show how inaccurate preseason power rankings can be, but I digress. 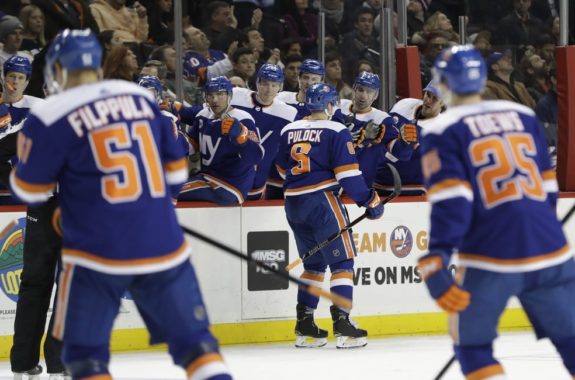 The Islanders’ defense is littered with great players. Stanley Cup champions Johnny Boychuk and Nick Leddy are in their fifth seasons with the club and have both provided veteran leadership to a relatively young defense. Thomas Hickey is another serviceable veteran on defense. He recently returned to the ice after missing about two months to a suspected head injury.

Two more key members on defense are young guns Ryan Pulock and Devon Toews. After spending years as a top prospect in the Islanders system, Pulock has emerged as one of the best defenders on the team. A recent addition to the power play, the Dauphin, MB native has helped breathe new life into a struggling unit. Toews is a rookie who has quickly established himself as an integral member of the Islanders defense.

On offense, the Islanders are far from the best in the league, but they’ve done just enough. Center Mathew Barzal, fresh off an electric rookie campaign when he won the Calder Trophy, is proving in his sophomore season that he is still one of the most exciting young players in the game. His outstanding speed and puck-handling ability make him must-see television night in and night out. 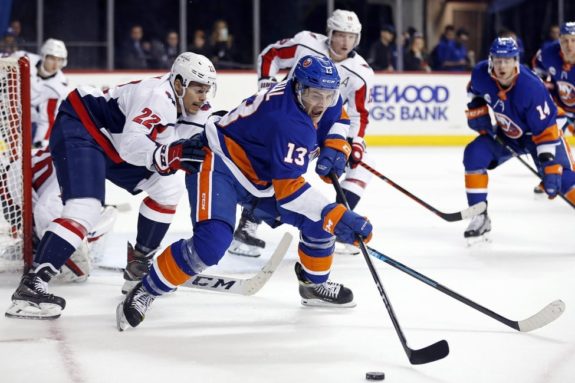 Rounding out the centers are the streaky Brock Nelson, and role players Valtteri Filppula and Casey Cizikas.

The glaring issue here is forward depth. Team captain Anders Lee and Jordan Eberle have both been solid on the first line, but aside from Josh Bailey and Anthony Beauvillier, the wingers behind them on the depth chart leave a lot to be desired. Either way, the Islanders should be more than happy with what they have now.

The logistics of both improving the team and keeping its nucleus, make it hard to find a better situation for the Isles. They have some key players who will be unrestricted free agents after the season, most notably Eberle, Lee and Lehner. Eberle is unlikely to be brought back, while Lee is expected to re-sign. Lehner is up in the air since he could be looking at a big payday as he’s in the midst of a career year.

Regardless of whether or not they re-sign these players, New York has a ton of cap space. Losing Tavares stung, but had they retained the center on the contract that was offered, they would not have nearly as much cap room.

In terms of prospects, the Islanders have one of the deepest farm systems in hockey. At the top is Noah Dobson, who was taken 12th overall in last year’s NHL Draft and is one of the best defense prospects in the league. Had the Islanders made a blockbuster trade for someone like Mark Stone or Matt Duchene, Dobson likely would have been the centerpiece. 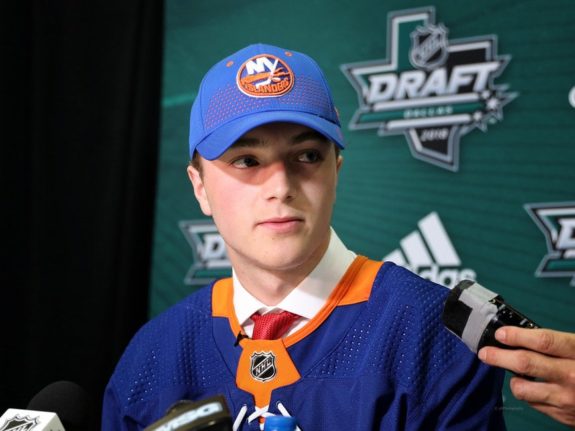 Another elite prospect in the Isles’ system is KHL goaltender Ilya Sorokin. He is known by many as the best goalie prospect that isn’t in the league. Aside from those two, the Isles system features many other high ceiling prospects such as Boston College’s Oliver Wahlstrom, AHL defenseman Sebastian Aho, and winger turned center Otto Koivula.

These are not guys that Lamierello or fans should want to trade yet. The Islanders lacked the mid-tier prospect depth to pull off a big deal without giving up any of their elite prospects. With that in mind, the front office opted not to trade anyone at all. Their best interest is to stockpile prospects at this point in time.

So did the Islanders screw the pooch at the deadline? Yes and no. While it would have been nice to add another forward to the roster and improve the offense, this is a young team playing with house money with a bright future ahead of it. The best is yet to come.