On the ice, the New York Islanders have to be satisfied with their first few months in Brooklyn. Around it and above it, they must be anything but.

While the team currently sits in third place in a strong Metropolitan Division, the fans sit mostly at home. And unlike the Isles’ record, which continues to improve as December moves forward, attendance numbers seem mostly stagnant.

Sixteen games into their Barclays Center existence, the Islanders rank second to last in the league in average attendance. They are drawing 12,365 fans per game, ahead of only the Carolina Hurricanes, an organization, it should be noted, whose name has frequently popped up in recent relocation rumors. In their move to Brooklyn, the Isles were supposed to leave such company behind. 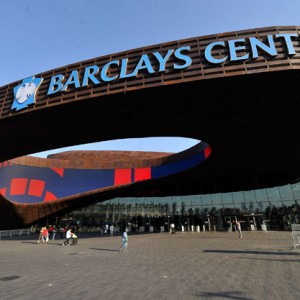 To be fair, part of the team’s low ranking is due to the relatively small capacity of Barclays Center. With just 15, 813 seats for a hockey game, the arena is the second smallest in the NHL. Even at 100 percent capacity for every home game, the Islanders would rank just 23rd in average attendance.

But viewing the numbers through a different lens hardly paints a brighter picture. In terms of average capacity, the Islanders – at 79.9 percent – still rank 26th in the league. Some might call that better; others might call it not quite as bad.

Naturally, this begs the question:

What’s gone wrong for the Islanders in Brooklyn?

There are a few conspiring factors at play, and each one relates to the organization leaving the Nassau Coliseum. (More on that old barn in a bit.)

For one, most of the team’s fans have found the trip to Barclays Center to be a considerable burden, especially as it compares to the old commute to the Coliseum. On top of that, ticket prices have inescapably risen at the Isles’ shiny new arena, with TiqIQ reporting an average price of $141.45 this year compared to $120.02 in 2014-15 – about an 18 percent year-over-year increase. And lastly, the emotional displacement triggered by the team’s departure from Nassau County has been heavy and real for many of its longtime fans. And their response has been simple: Brooklyn can wait.

But before Islanders fans continue to decry the organization’s relocation, they need to consider its recent history. For fueling all the indignation at being moved to Brooklyn, it seems, is a romantic perspective on how things used to be.

The Islanders haven’t drawn crowds in years. And though a wave of nostalgia fueled a sudden resurgence in the fan base in the team’s final season in Uniondale, even then the Islanders had a hard time filling their building. That’s right, despite last year harkening back to the glory days of Nassau Coliseum –  and boy, did it ever, with all the commemorative apparel and special tributes – the Isles still finished 25th in average attendance and 23rd in average capacity. In the intervening months, all that sentimentality has seemed to glaze over the facts and Islanders fans remember their recent Nassau Coliseum history as something much more glamorous than it was. 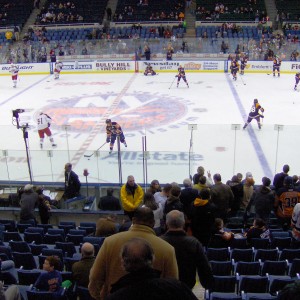 Sparse crowds were a common sight in Nassau Coliseum.

Meanwhile, the building they called home was falling apart. The roof sprang leaks during heavy rainstorms. Decrepit seats collapsed beneath fans. Wires and cables protruded from the ceiling. The list goes on. With Nassau County unwilling to invest tax money in a building rumored to be on its way out, and the arena’s management company, SMG, mostly off the legal hook, the Coliseum withered away in a state of neglect.

It was a cruel fate for a building that once quivered with life. In the early 1980’s, when those dynastic Islanders won four Stanley Cups in a row, there wasn’t an arena in the league with a heartbeat like the Coliseum’s. But just as players and coaches can’t survive on the triumphs of yesteryear, so too are professional arenas expected to move with the times. By the turn of the century, it was clear the Coliseum was falling behind its NHL counterparts; a decade later commissioner Gary Bettman threw discretion to the wind and called it the worst sports facility in North America.

Three years after that, Islanders fans might recall, the team signed a 25-year lease in Brooklyn at the newly opened Barclays Center. After plans to renovate the Coliseum were continually shot down by Nassau County politicians in the years prior, it was just about the only choice that owner Charles Wang had left.

The point is this: the Islanders left Nassau County because Nassau County could no longer support them. And while their original fans may not be enamored of the team’s new home, they weren’t exactly in love with its old one either. Not toward the end, at least, not when the arena needed them most. How could anyone – politicians included – justify renovations for a building that ranked dead last in attendance during its team’s playoff-bound season?

So while it’s easy to blame relocation for the Isles’ low attendance numbers this season, just remember that it’s been quite some time since they were a popular show by NHL standards. There’s an obvious trend here, one that can’t be obscured by the Coliseum’s bittersweet revival in its final season.

Still, all is not lost for the Islanders in their new digs in Brooklyn. Yes, many seats have been left empty during weeknight games against small-market opponents. (So it is for multiple teams in the league.) And yes, the arena still feels more like a hotel than a home for the Isles and their fans. But there have been glimpses of Barclays Centers’ potential, namely in a Dec. 2 tilt against the Rangers. 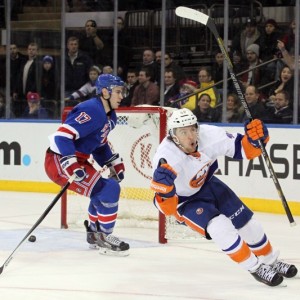 The Isles enjoyed an exciting victory over the Rangers in the rivals’ first meeting in Brooklyn.

The building was sold out, it was loud, and it was downright elated when the Islanders clinched a 2-1 shootout victory over their crosstown rivals. Detractors might point to the number of Rangers fans in the building, but when were things ever different in the Coliseum? Part of what makes that rivalry so fun – a large part of it, in fact – is the ongoing turf war between the two fan bases. And it was waged at full tilt in the teams’ first meeting in Brooklyn.

Nights like that are what a new arena needs to start finding its soul. The Coliseum, keep in mind, endured some pretty barren years before it became the madhouse it’s so fondly remembered as today. A bond between an arena and its fans is forged through shared experience; it is hardened one memorable moment at a time. This current Islanders team has plenty of moments left to deliver.

So turn the page, Islanders fans; that last chapter is over. (And no, the team is not going back.) There’s a new one beginning in Brooklyn and though it all feels very different, let’s acknowledge the truth together: that’s a good thing.