The NHL trade deadline is now history. This past weekend leading up to the deadline consisted of endless speculation and attempts to predict the various different outcomes that would ensue. The New York Rangers were one of the most active teams at this season’s deadline as they continue to sell off their players and build their pool of assets. Here grades for each of their trades.

Mats Zuccarello to the Dallas Stars: A+

General Manager Jeff Gorton knocked this trade out of the park. It was widely thought that the return for Zuccarello would be a second-rounder and a lower to middle tier prospect. There was a small faction of people who were hoping that Gorton could’ve acquired a first-round pick for Zuccarello, but there was never a chance of that happening. But what makes this trade so excellent is that both picks are complemented with conditions.

But even better, both picks have the chance to become first-rounders. In essence, Gorton gave himself to opportunity to choose his prospect as well as potentially wind up with one or two extra first-round picks. 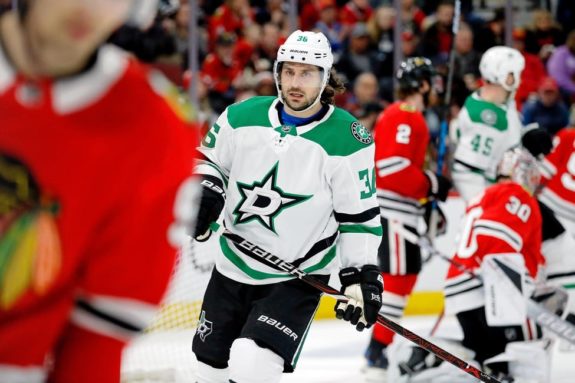 Despite the good return from this trade, many Rangers fans did not want to see the Norwegian winger leave New York. Unfortunately, if they did not move Zuccarello by the deadline, then he most likely would’ve ended up going elsewhere in free agency, leaving them with nothing in return.

Kevin Hayes to the Winnipeg Jets: A-

The Rangers acquired a 2019 first-round pick as well as forward Brendan Lemieux. This is what was expected, a first-rounder and a decent prospect. But I wonder if the Rangers could’ve been able to pry more away for Kevin Hayes.

There were a lot of rumors surrounding Hayes to the Nashville Predators and whether or not they would send top prospect Eeli Tolvanen to New York. But that trade never materialized. I wonder if Gorton could’ve gotten a slightly better prospect, but then again, he targeted Lemieux specifically for his style of play. Overall, the trade was executed as planned and the return was as expected.

Adam McQuaid to the Columbus Blue Jackets: B+

Adam McQuaid was traded in exchange for a fourth-round pick and a seventh-round pick, which is what the Rangers gave up for him originally, as well as defensive prospect Julius Bergman.

The Rangers gained more out of this trade than they originally gave up with the addition of Bergman. But there were thoughts that maybe the Rangers could’ve received a third-round pick in return for McQuaid due to the consistently high demand for top-six defensemen during the playoffs.

Regardless, the two picks the Rangers gave up last offseason were returned to them as well as a prospect. Gorton said that Bergman will play in the AHL for the Hartford Wolf Pack this season, but he is signed to play in the SHL next season.

Not Trading Chris Kreider: A+

This was the biggest decision that Jeff Gorton had to make. Heading into to Monday, trading Hayes and McQuaid were already basically a forgone conclusion. But what would happen to Chris Kreider was still unknown. Gorton was listening to offers for the speedy winger, but it became increasingly clear that the Rangers would not trade him without receiving multiple high draft picks and top prospects in return.

Nonetheless, Gorton still would’ve pulled the trigger on a Kreider trade if the offer was right. Even though the return for him would’ve been immensely valuable, there comes a point when a rebuilding team needs keep some of their veterans. In addition, Kreider is an excellent forward to have around younger talent to help their skills improve.

Gorton had opportunities to make this trade, but he did the smart thing by keeping him around for another year of the rebuild. Kreider has another year on his contract and will be an unrestricted free agent after next season. Therefore, we could see him on the move at next season’s trade deadline, but that remains to be seen.

Now over a year into the rebuild, Gorton is doing exactly what he should be doing. The short-term goal of a rebuild, despite possibly having to endure a couple mediocre seasons, is to stockpile draft picks and prospects. Rebuilding entails getting as many assets and players who have NHL potential as possible.

The Rangers now have 10 picks in this year’s draft, including two first-round picks which may become four by season’s end. At this rate, the rebuild should be timely and efficient. Expect to see the Rangers back in playoff contention by the 2020-21 season.