We got big news today, as for the first time in their history, the Nashville Predators will host an NHL All-Star game which will take place in 2016. It was said that Nashville put in bids not only in 2016, but also until 2019 in hopes of getting the event. 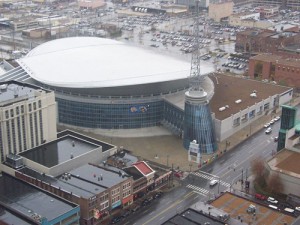 The official press conference for the event will be held at 12pm EST, and will be streamed on NHL.com.

It literally feels like years since I last sat on my couch and watched the likes of Shea Weber and Zdeno Chara go at it in the Hardest Shot Competition, or Patrick Kane speed down the ice in a superman cape and glasses in the breakaway competition.

Oh wait… it has been years…

Three years in fact, as the NHL actually hasn’t held the event since the 2011-2012 season in Ottawa, Ontario. Basically every event was cancelled during the lockout-shortened season, even including the NHL Bridgestone Winter Classic. Last season there was obviously the Sochi Winter Olympics which is understandable, as back in 2010 they cancelled the All-Star Game in favor of the Olympics in Vancouver.

This year’s All-Star Game will be held in Columbus, Ohio as they were originally slated to play the game before half the season was wiped out thanks to the lockout.

We will probably learn a lot from the All-Star Game this year in terms of what events there will be moving forward.

I for one, am thoroughly hoping for the return of the All-Star fantasy draft. It really brings out a lot of the players personalities and it’s very interesting on how they view each other as peers when being drafted. Back in 2012, there were a lot of great players including Evgeni Malkin and Erik Karlsson to be picked from, but it was awesome to see Pavel Datsyuk being selected first overall, and everyone in full agreement that he deserved to be taken with that pick.

What I would also like to see a change in is with the actual game. In my opinion it should be the same way as baseball so whoever wins the game has home-ice advantage in the Stanley Cup Finals. As much as I love the crazy high scoring games that end like 13-12 or something like that, I wanna see the best players in the NHL all giving it at least close to their all in hopes of home-ice in the finals.

It’s a highly debated topic, however after a three-year break from the event, there isn’t a reason to not take a look at changing the rules, if not this year, then maybe next year in Nashville.

The Preds have been in the NHL since 1998, they have a state-of-the-art arena, and an awesome city that is quite familiar with hosting big-time events.

They annually host events like the Country Music Festival and the CMA awards. Aside from the Predators, they also have the Tennessee Titans which is another big-ticket in the city, especially if they start winning.

Nashville has the experience, but big thing the Predators needed to secure their spot was a state-of-the-art convention center. As of 2013, they finished construction on the Music City Center which all but secured the Preds place in the All-Star bidding.

Nashville’s been waiting a long time to get their chance at hosting an NHL event of this caliber, and for what it’s worth, they hosted the NHL Draft in 2003, and that draft is widely known to be one of the best Drafts of all-time.